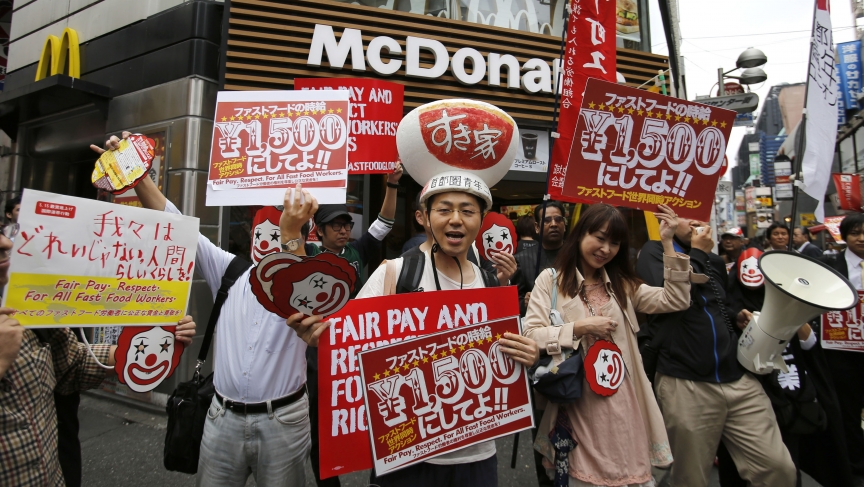 Demonstrators holding posters march during a protest to demand higher wages for fast-food workers in front of a McDonald's restaurant in Tokyo's Shibuya shopping and amusement district May 15, 2014.

In the Philippines, protesting workers held a flash mob inside of a McDonald's in Manila. They sang "Let it Go" from the Disney movie Frozen. Except this time, the lyrics were "let go of those low wages."

Today, fast-food workers around the world took to the streets in a global protest that is an outgrowth of a movement by fast food workers in the US to raise the minimum wage to $15 an hour.

Rallies were planned in 33 countries around the world from India to Japan to Brazil. In London, more than 100 protesters gathered in front of a McDonald's in Trafalgar Square. "Hungry for justice" was the chant.

Julie Sherry was one of the organizers there. “We went to Trafalgar Square in McDonald's today because it's where our parliament is and it's right in the heart of the capital,” she says.

Sherry is trying to focus attention on the issue of "zero hours contracts," which affect millions of low-wage workers in the UK. Under these sorts of contracts, workers are not guaranteed a certain number of hours.

“This sort of contract is used to discipline the work force in the sense that if you don't come in on your day off, because you were asked at the last minute, then you might only get four hours the next week and then you can't pay your bills,” she says.

According to Sherry, there's still a long way to go on the campaign, but at least fast-food workers are starting to speak up.

“Like the strikers in the US would tell you, it's not that they didn't care about the problems they were facing in the workplace," she says, "it's that they didn't think they had a voice. And that's what we're trying to raise here at the moment, is that people can have a voice.”

PRI's The World contacted McDonald's for a comment on today's global protest. The corporation sent a statement:

"This is an important discussion that needs to take into account the highly competitive nature of the industries that employ minimum wage workers ... McDonald's respects our employees' right to voice their opinions and to protest lawfully and peacefully. If employees participate in these activities, they are welcomed back and scheduled to work their regular shifts."