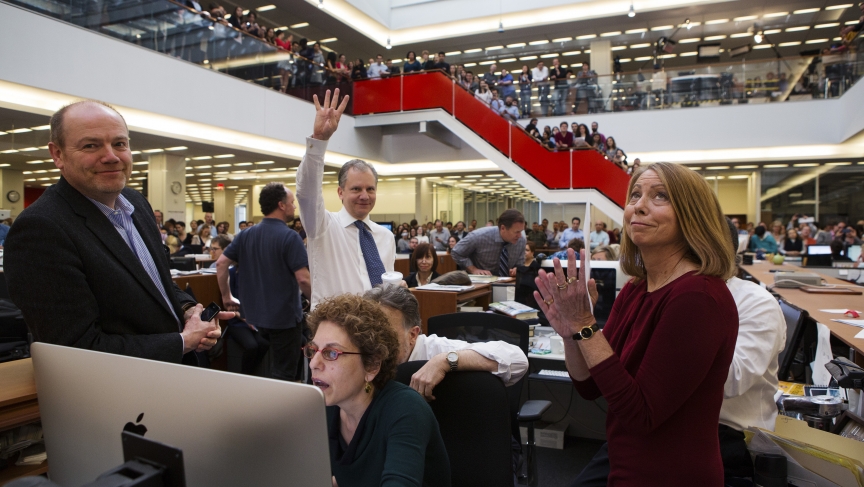 Crusading women and minority journalists who dream about crashing through the glass ceilings to lead their newsrooms should be careful what they wish for — and when they wish for it.

Traister points to Natalie Nougayrède, the first female editor-in-chief of the French daily Le Monde. Nougayrède assumed her leadership position during a very difficult time for journalism and stepped down under pressure on Wednesday.

The same could be said about Jill Abramson, the first woman executive editor of The New York Times, who was fired on the same day.

"Both of these women were running these places in very volatile circumstances, obviously putting them at far greater risks of losing their jobs," Traister says. "Both organizations are trying to adapt to a new digital world, where their print versions no longer have the same meaning, weight or power."

Traister's critique is detailed in The New Republic in a piece today called: I Sort of Hope We Find Out That Jill Abramson Was Robbing the Cash Register.

She sees several similarities in the downfall of Abrams and Nougayrède — including concerns from staff that the women were "pushy" and "abrasive."

"Many of the characterizations of Jill Abramson and also of Natalie Nougayrède at Le Monde involve the fact that they were very aggressive, ambitious perhaps, not always warm," she says. "Those qualities are not atypical of bosses to begin with and certainly not big bosses of powerful organizations. But also that would not be atypical of qualities exhibited by the first women to make these historic moves."

Traister says she's not arguing that it was wrong for either of these women to step down or be fired from their posts. "There may have been very legitimate complaints," she says. "But it's also true they were given these very historic posts at a time when the institutions that they were suddenly going to be running were in real trouble."

And that trouble might be what eventually nudged these once disenfranchised, then powerful people over the infamous "glass cliff."

"Groups that have been sidelined — women and people of color — from positions of power, as they move closer to the centers of power, it happens to be at a time when the nature of that power is eroding," Traister warns. "When the possibilities that those positions are going to crash into a wall are greater than ever."