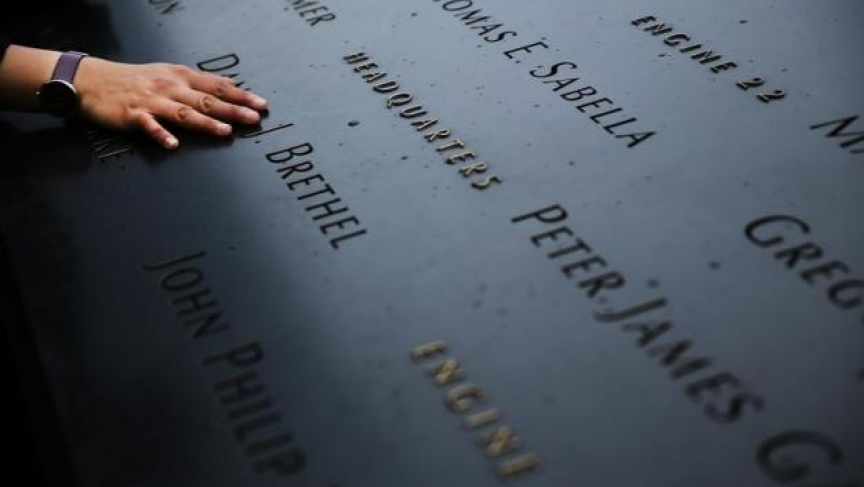 A woman places a hand on the names engraved along the South reflecting pool at the Ground Zero memorial site during the dedication ceremony of the National September 11 Memorial Museum in New York, May 15, 2014.

Today, the nation stopped again to remember what happened on that September morning almost 13 years ago — and to dedicate a memorial that was long in the making.

"Here at this memorial, at this museum, we come together," said President Barack Obama. "We stand in the footprints of two mighty towers graced by the rush of eternal waters. We look into the faces of nearly 3000 innocent souls, men and women of every race, from every creed, from every corner of the world. Here we tell their story so that generations unborn will never forget."

In the crowd were 9/11 survivors, victims families, and many of the rescue workers. And it has not been easy getting to this moment. There have been emotionally charged battles and political fights over almost every step of the planning of the museum and memorial.

Elizabeth Greenspan says the National September 11 Memorial Museum is really the first institution to offer an official narrative of 9/11.

"There are a lot of books and movies and documentaries about what unfolded on the day of September 11," she says. "And there are some that look at the origins of al-Qaeda, say, or investigate certain policies that unfolded in response to 9/11, like going to war, or opening up Guantanamo Bay. But these pieces haven't been put all together in one space."

Greenspan is an urban anthropologist at Harvard whose book, Battle for Ground Zero, tells of the long struggle to rebuild in this part of lower Manhattan. "While the museum devotes the most space to documenting the day, it includes components on al-Qaeda [like the film] and references the policies that followed, which tend to be quite political."

She says there's something else that makes this place unusual — it is both a memorial and a museum. "It has a dual mandate to remember those who were killed, and educate about the events — and sometimes these dual programs do not neatly go together."

Some of the family members of the victims, she explains, did not want photographs of the perpetrators on display, "for fear that doing so would inadvertently memorialize them."

Obama also referenced Bin Laden's death, when he mentioned "the seals who did their job". V. subtle. Only global political piece of address.

Similarly, she says, "there is an object called 'the composite' that vividly depicts the power of the destruction (it's a roughly 4 foot mound of melted concrete and steel that contains 5 or 6 stories of the tower compressed together). Some families believe that human remains are inside and that it is a tomb and therefore should not be on display."

Greenspan says that, for many Americans, "it's still quite difficult to have an open public discussion about the meaning of 9/11." She recalls that New York Mayor Bloomberg decided against allowing any original speeches during the 10th anniversary services, feeling it was still too soon to deliver an original speech on the meaning of the day.

"There are many other aspects and questions that remain taboo, including why it happened, how the U.S. has responded to 9/11, and what the attacks mean," she says. "The museum is offering the first, official interpretation on how the public should understand this event, which is important. I think one of the big questions is whether or not it will facilitate broader debate and discussion of some of these more difficult questions."

The National September 11 Memorial Museum opens to the public May 21. Here is a Reuter's video overview of today's dedication.