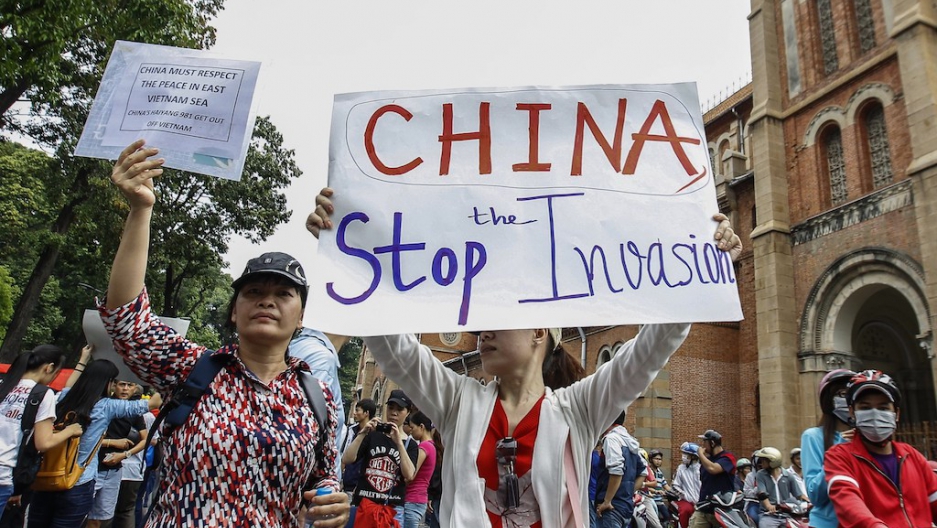 HONG KONG — Conflicts have recently escalated between China and its Southeast Asian maritime neighbors over rocks, reefs, shoals and islets in the South China Sea.

Last week, Hanoi released video footage of its vessels being rammed by the Chinese Coast Guard after Vietnam tried to block China’s attempt to commence drilling for hydrocarbons off the coast of central Vietnam. China also protested the Philippines' May 9 arrest of Chinese fishermen at a shoal 60 miles off its southwestern coast for allegedly possessing large marine turtles, an endangered species.

At first glance, the clashes may seem like a contest for energy and fishing resources, and they are often reported as such.

But they are far more important than that.

The continental shelf certainly has deposits already being exploited by all parties off their respective coasts. But these are mostly small. While economically significant for Malaysia and Vietnam, they are unlikely to yield resources on a meaningful scale for China.

Instead, the territory’s significance is primarily strategic for Beijing. As such, this is an issue of huge importance for the United States — which insists that the sea is part of international waters — and for other countries such as Japan, for which the sea provides a crucial link to the West, the Middle East, and much of South and Southeast Asia.

Indeed for two millennia this sea has been a generator of global trade by providing the link between China and northeast Asia and the spice and forest islands of southeast Asia, on the one hand, and with India, Iran, the Arab world, western Europe and Africa.

China’s claim is represented by a nine-dash line on its maps and in its passports, extending southward roughly 1,080 nautical miles (or 18 degrees of latitude) from its coast to within a few miles of Malaysian Borneo, and including almost all the waters and features between Vietnam and the Philippines. Intermittently, and particularly over the past two years, China has used force to implement some of this claim.

For sure, China is in no position yet to contest use of the sea for international commerce and may never do so. However it claims almost all the islands and rocks, around which it then claims 200-nautical-mile Exclusive Economic Zones (EEZ) under the UN Convention on Law of the Sea (UNCLOS). That provides a basis for turning the sea into a “Chinese lake.”

Vietnam is an immediate focus because of its proximity and history of resistance to China.

Recent events are a reminder to the Vietnamese of China’s invasion in 1979, and of its seizure of the Paracel Islands in 1974, the very islands which now provide its justification for drilling in waters off Da Nang, which Vietnam considers its EEZ. China also wants to ensure deep water access from its submarine bases in Hainan.

The Philippines is a target because it is perceived as weak. Pressuring the Philippines is also a way to test US commitment to its former colony. Last year China occupied the Scarborough Shoal, bringing its naval presence to within 110 nautical miles of Subic Bay, the once and possibly future focus of US naval power in the region.

Chinese actions have led to a new US-Philippines defense cooperation agreement sealed during President Obama’s recent visit to Manila. Other countries such as Malaysia and Indonesia are also boosting their US military links.

But no one quite knows how far the US “pivot” to Asia will go. The US has declared itself neutral on the island claims despite the facts that none of them has ever been permanently inhabited and almost all lie far closer to the other countries than to China.

For China’s maritime neighbors it represents an assumption of hegemony over a region whose states once paid occasional tribute to the emperor in Beijing. In reality payments by these “barbarian” mercantile states was to facilitate trade rather than to acknowledge sovereignty.

But “tribute” is easily construed by an increasingly nationalistic Chinese leadership to reflect the belief that China is not merely much bigger than its neighbors but culturally, even genetically, superior. China backs its claims to features such as the Scarborough Shoal with evidence that Chinese sailors visited them hundreds of years ago.

That the ethnic Malay inhabitants of what are now Vietnam, the Philippines and Indonesia have been sailing these seas longer than the Chinese is simply ignored.

But while resentment against Chinese assumptions runs high, there is scant ability to do much in practical terms other than make noises internationally and acquire some self-defense capability. The states concerned have combined populations of almost 500 million but limited unity of purpose and an increased reliance on Chinese trade and investment.

China refuses to discuss issues other than bilaterally. Vietnam is caught between its nationalist instincts and a communist party seeking to emulate its Chinese counterpart by liberalizing its economy but not its politics. Malaysia has kept its head down hoping that China will leave it alone and worried that China may seek to intervene on behalf of its large ethnic Chinese minority. Indonesia has, until recently, avoided confrontation with China, aiming to be seen to lead ASEAN (the 10-member Association of South East Asian Nations). Although since 2000 China and ASEAN have been discussing a code of conduct for dealing with sea disputes, nothing has materialized — because China doesn't want one.

As for ASEAN it remains divided between the interests of the littoral states and the others, particularly Laos and Cambodia, which invariably oppose criticism of China. Predominantly ethnic Chinese Singapore, usually a close US ally, also advises ASEAN “neutrality” — a code word for not offending China.

None has yet followed the Philippines which last year took the issue to the Permanent Court of Arbitration at The Hague, claiming China’s actions were in violation of UNCLOS. China has refused to take part. A decision is not expected until 2015. It is not even clear that the court will accept that it has jurisdiction.

A ruling in the Philippines’ favor would certainly embolden the other states. It is also possible that, as in the past, China will for the time being avoid further confrontations which upset its neighbors and wait a few years before grabbing another rock or shoal or implanting a drill rig near their coasts. But the issue of the South China Sea will remain a major feature of its relations with its neighbors and the configuration of power in East Asia.