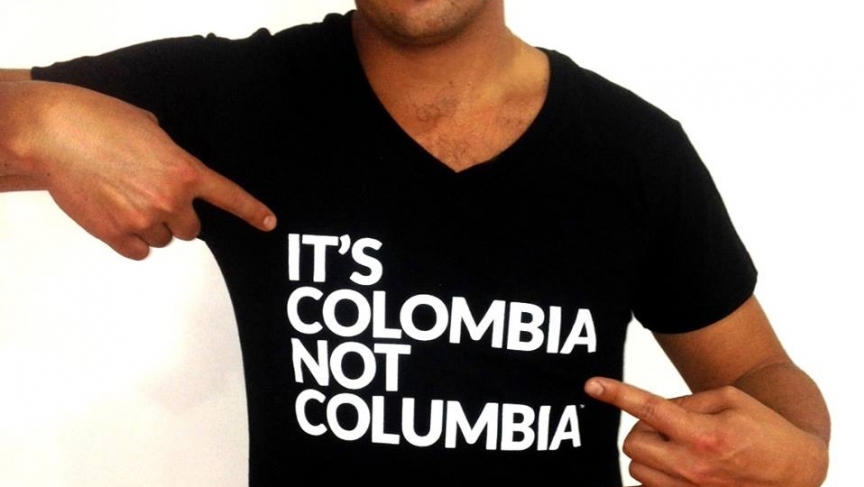 The "It's Colombia, not Columbia" Facebook campaign is trying to educate the rest of the world on how Colombians spell their country's name.

Imagine someone spelling America with a K instead of a C; or calling the USA, the USB.

Now you know how Colombians feel. Foreigners routinely spell Colombia with a “u” — Columbia — like the university or the District of Columbia.

I've been living in Colombia for 17 years but I still get e-mails from family and friends — even editors — who misspell the name of my adopted country. They have some high-profile company.

Pardo surfs the web to prove his point. Sure enough, press releases and websites for Starbucks, Lufthansa Airlines, Virgin Mobile, and Germany's Bundesliga soccer league have all spelled Colombia with a U. Brooklyn's Botanical Garden made the same mistake for its display of Colombian orchids.

"It happens all the time, I'm telling you," Pardo says.

I notice that Frommers, the travel guide spelled it Columbia.

"How can a travel guide get the name of the country wrong?" I ask.

To promote the correct spelling, Pardo has helped create an online campaign called "It's Colombia, not Columbia." Thousands of volunteer spellcheckers have joined. When they spot mistakes, they send messages via Twitter, Facebook and email, politely seeking corrections, which are often made.

But people have been misspelling Colombia for years.

"Colombians never used to try to correct," says Tatiana Gonzalez, a spellchecker activist. She says it's because Colombia is doing so much better these days; drug-related violence has diminished, the economy is growing and tourism is on the rise.

"Our country has changed so much during this time that now we feel confident, now we have this newfound pride," she says. "We have gained the position to now stand up and say: 'Hey! Guys!' "

Not everyone is that concerned about it, though. Colombian Army colonel Javier Carvajal is familiar with both spellings — he went to high school abroad, in the District of Columbia -- and he thinks the "It's Colombia, not Columbia" campaign is a waste of time.

"To be honest, people who think like that probably they don't have too many things to do, you know, so they start thinking like: 'Oh my god, it's un-respectful',” he says.

Still, Colombians aren't the only ones demanding accuracy. When the Iron Curtain came down, Michael Jackson and other Western artists performed in the Romanian capital of Bucharest while telling concert-goers it was great to be in Budapest, the capital of Hungary. Last year, a Romanian candy company launched a campaign to clear up the confusion.

"Rom presents: Bucharest, Not Budapest. The Bud and the Buch might sound similar but the pest is different than the rest."

Getting the most basic information correct is also a matter of respect. And to be fair, Colombians don't always get it right — like when they spell my name J-H-O-N, instead of J-O-H-N.

But somehow that seems more forgivable.

At the Bogotá Planetarium, there are a handful of moon rocks on display that were gathered by the Apollo 17 astronauts in 1972 and donated to Colombia by President Richard Nixon.

The dedication plaque from the Nixon administration says: "Presented to the People of Columbia.”

41 years later, the typo has yet to be corrected.