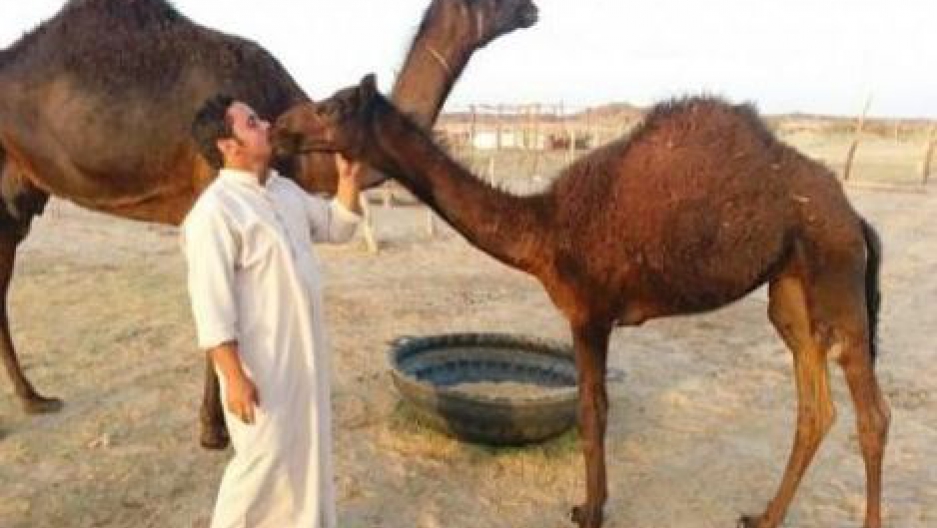 A Saudi farmer kisses a young camel despite warnings from the government against such contact due to MERS virus fears.
Credit: Al Sharq
Share

But you wouldn't know it among some in the camel farming community.

Saudi farmers are taking photos and video of themselves hugging and even kissing camels in defiance of a warning from government health officials not to go near the animals, which have been linked to the deadly virus.

In one video, a man stands between a pair of camels and even asks one to sneeze.

"Do sneeze in my face," the farmer says, according to Gulf News. "They claim camels carry the coronavirus," he adds sarcastically.

Then he shakes one of the camels' heads.

On Twitter, a user with the handle @fheed6666 tweeted the following to active Saudi Health Minister Adel M Fakeih: "@adelmfakeih #the_campaign_against_camels_exposed And we call for it to stop or for evidence to be produced because camels are fine and all the ill people are in cities."

An infographic trending on Twitter claims camels are more valuable to the country than petrol.

Saudi Arabia has urged people in recent days to wear masks and gloves around camels, to stay away from camel meat and milk and to avoid any of the animals that appear sick in an effort to contain infections.

But many camel farmers claim they have lived among the animals for decades and never been infected. They have challenged health officials to provide proof that the animals are indeed a source of the virus.

The developments illustrate the many challenges Saudi health officials face in attempting to raise awareness of MERS in the country that's become the epicenter of the deadly disease.

As of Saturday night, the country's death toll stood at 139 and the number of infections at 480.

The virus, which causes coughing, fever and sometimes fatal pneumonia, first appeared in Saudi Arabia in 2012 and has recently been reported there, in neighboring countries and, in a few cases, Europe and Asia.

Two cases have now also been reported in the United States.

MERS kills about 30 percent of those infected. It comes from the same family as the SARS (Severe Acute Respiratory Syndrome) virus, which killed 800 people around the world after first appearing in China in 2002.