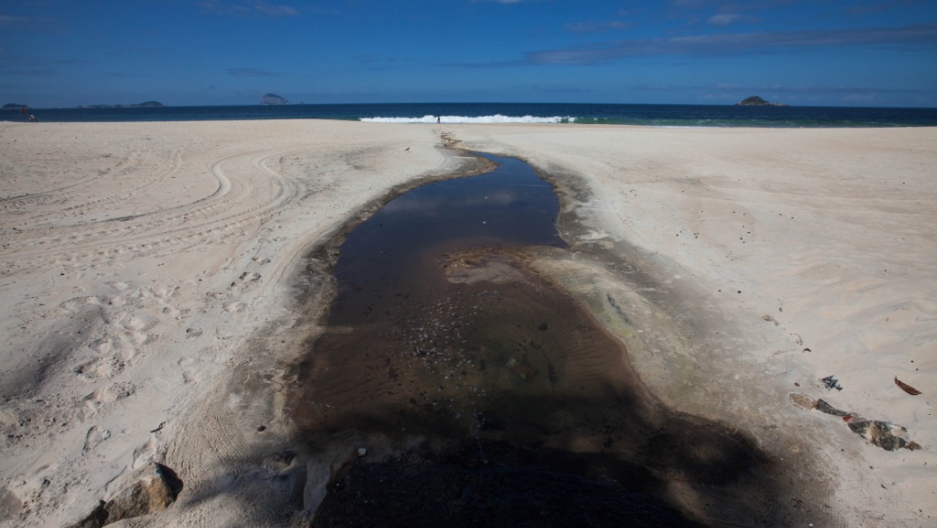 RIO DE JANEIRO — Brazil’s “Marvelous City” will play host to around 400,000 tourists during the World Cup next month. And there’s one thing visitors may be unable to avoid, be it on their way to the airport or at the beach: human feces.

In Rio, only around 40 percent of sewage is treated, and the rest ends up in the city's rivers, lagoons, beaches, and bay. Plus, between 80 and 100 tons of trash end up in the city's picturesque Guanabara Bay every single day.

The government plans to clean up the bay ahead of the 2016 Summer Olympics, especially because of the water events involved. But Cariocas, as Rio residents are known, have seen the same problems persist for decades.

Raw sewage has a citywide impact on the environment. Mario Moscatelli, a biologist who's been monitoring Rio’s waterways for decades, calls the bay a “real latrine.” Over the past 20 years, well over a billion dollars have gone into efforts to clean up Guanabara, but environmental degradation has just worsened, Moscatelli says.

He’s seen everything in the water from floating couches to deformed fish to a dead sea turtle bobbing in a tire. "Not in my worst nightmares would I have imagined that the Brazilian authorities would have done this with the environment,” he laments.

According to the latest measurements by the government-run State Institute of the Environment (INEA), 12 locations along beaches in Zona Sul — home to the city’s wealthiest and tourist-friendly neighborhoods — are unsafe for swimming due to the poor water quality.

Biologist Mario Moscatelli has been doing flyovers of Rio’s waterways since the late 1990s to document the city’s environmental degradation. (Eliseu Cavalcante)

Seeping across the classes

In Rio, sanitation crosses class lines. The lack of sewage treatment means excrement from upscale apartments also goes into the city's waterways and beaches. In the May INEA study, every test site on the beach in Leblon — the priciest neighborhood in the country — was considered unfit for swimming.

Favela residents, though, face serious waste issues on a daily basis. “In Brazil, the people who most need sanitation are the poorest with the least political power,” says Mauricio Santoro, an adviser at Amnesty International Brazil. Around half of Brazil’s population of nearly 200 million lacks access to sanitation.

This sewage situation is a 17th-century problem, say advocates. Indeed, during Brazil’s colonial period, slaves known as “tigers” — due to the appearance of skin splotched with feces — were responsible for dumping the Rio elite’s excrement into the city’s waterways.

In Rio’s favelas, raw sewage is a part of life, as pictured here in the famed “City of God” slum. (Eliseu Cavalcante)

Community leader Jose Martins de Oliveira has lived in Rocinha, Latin America’s largest slum, for nearly half a century. He’s on a mission to get the favela a real, modern sanitation system. Now much of the community relies on open sewers that flow through the streets and under houses.

He hopes whoever wins October’s presidential election will invest in sanitation instead of a proposed $723-million cable car. This would be much more cost effective, he says, since it would lower health care fees and wouldn’t require the nearly $1 million needed annually for cable car maintenance payments.

But given the fits and starts of many government-funded projects in the favela, Martins explains he’s focused on the long-term. “Our fight is for our children and grandchildren,” he said.

In Rocinha, the largest favela in Latin America, much of the community depends on open sewers, pictured here, making sewage a part of daily life. (Eliseu Cavalcante)

Health problems from exposure to fecal matter can happen to anyone, especially at the beach. Hepatitis A is a common affliction in Rio, often transmitted through sewage exposure, explained Dr. Daniel Becker, a pediatrician and the founder of the nonprofit Center for Health Promotion in Rio. Raw sewage can also cause diarrhea, microbial diseases, and parasites, among other problems. “In Rio, if you’re going to the beach, you’re going to sewage,” he said.

Constant exposure to raw sewage is a problem in favelas. Ivi Tavares Castillero, a doctor at a family clinic in Rocinha, explained that raw fecal matter not only causes skin diseases — one of the most common afflictions among favela children — but also gastrointestinal ailments. Plus, sewage attracts insects and rats, which can then transmit diseases such as leptospirosis. Open sewers mean residents may step on raw sewage every day, risk sipping contaminated drinking water, and face the threat of sewage flooding in their homes when it rains. Children continually exposed to that kind of waste are more likely to undergo a cycle of disease.

“The lack of sanitation is a symbol of Rio’s inequality, which is just a mirror of what happens in the whole country,” Becker said.

A contaminated lagoon in Rio’s Barra has different colors due to sediment, sewage flows, and the resulting cyanobacteria — some of which are toxic. (Eliseu Cavalcante)

Do the authorities care?

Those involved with the sanitation problem in Rio say it’s an “invisible” problem that doesn’t carry political capital, making it less of a government priority. In April, the state government announced that it was cutting its 2016 Olympics budget for bay clean-up by 95 percent, reducing spending from over $1 billion to around $51 million. The projects will fund boats to collect trash and eco-barriers to stem the flow of debris and sludge streaming into the bay. The budget excludes sewage treatment centers.

“There are two environmental battles in Rio,” Moscatelli says. “The first battle is to ensure that the authorities do what they promised to do. The second is to demand that the progress made isn't abandoned.”

Ahead of the 2016 Olympics, the state government is building “eco-barriers,” pictured here, but they do very little to prevent the 80 to 100 tons of trash that enter the bay every day, says biologist Mario Moscatelli. (Eliseu Cavalcante)

In the face of this challenge, activist group Meu Rio, or My Rio, ran a campaign this year to demand 100 percent sanitation for the city. While many Cariocas recognize the importance of the issue, it’s less of a priority for policymakers, who have been promising sewage solutions for decades, explained Enrica Duncan, a coordinator at the organization.

These efforts have indeed been slow: the city’s largest sewage treatment center is operating at 50 percent capacity, and another new treatment plant has failed to begin operations.

“When society mobilizes, the government gets moving,” Moscatelli says. “This problem isn’t a question of technology or money, but a lack of will.”

A sunbather sits on the beach near Rio’s Niteroi as trash and sewage float by. (Eliseu Cavalcante)