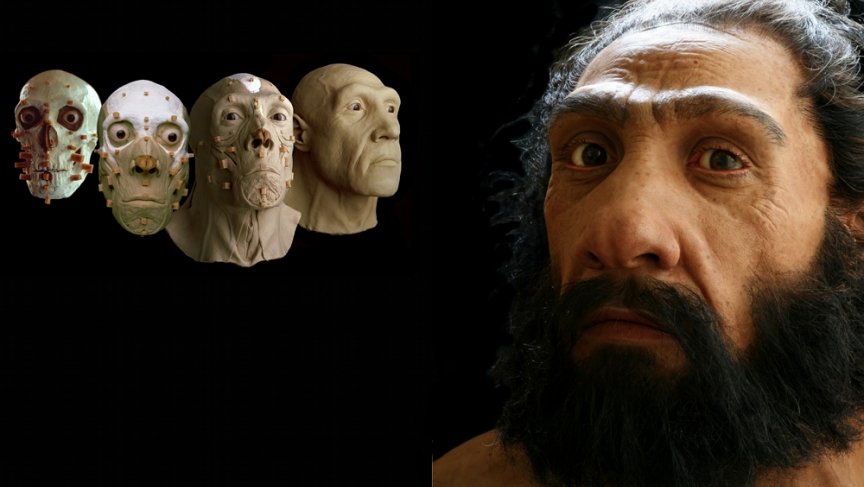 Stages in the reconstruction of Shanidar 1, a male Neanderthal from a site in Iraq.

From "Shaping Humanity" by John Gurche

When you’re a small child and you discover something fascinating, says paleo-artist John Gurche, you create art about it.

"I remember in fourth grade, " Gurche says, "I made an evolutionary series of heads out of clay. I suppose the simplest explanation of what I do today is that I never stopped."

His fascination led him to study science, especially early humans and their human-like ancestors. Now, he recreates these ancestors in sculptures and collaborates with the Human Origins Program at the Smithsonian’s Museum of Natural History in Washington, DC.

Gurche constructs his human sculptures based on information he gleans from fossils and from his own intuition. His work often requires leaps of imagination, Gurche explains, but he also has to pay close attention “to what the bones are telling [him.]”

Gurche has created an extraordinary series of sculptures for the Smithsonian depicting early humans in a range of activities and states of evolutionary development.

“Usually,” he says, “the bones have something to say about how that particular species developed, in terms of musculature and so forth ... Maybe there are strong muscle markings on the bones for flexor muscles of the head, of the hand and arm, that sort of thing.”

“When you’re doing this kind of work, you have to be aware of both the artistic side and the aesthetic side," says Gurche, "and also the scientific constraints you are operating under ... You can’t just make fantasy.”

Rick Potts, a paleoanthropologist and director of the Human Origins Program collaborated closely with Gurche to create the sculptures.

“Everything that [Gurche] does in his art reflects an idea," says Potts, "a scientific hypothesis about what [the hominids] look like, about what kinds of activities they were doing, even things about the rigors of life [and] the dangers that they faced.”

While Gurche’s art mostly confirms scientific thinking about what early hominids looked like, Potts says the finished product “can be entirely surprising.”

He says it is extraordinary to see visitors to the Smithsonian 's Natural History Museum come into the hall and be shocked, sometimes even moved to tears by their interactions with Gurche’s artwork.

One of his favorite pieces in the exhibit is a bronze statue that Gurche made of the species known as Homo heidelbergensis, based on a fossil originally found in Heidelberg, Germany. “It's the common ancestor of Neanderthals and our species, Homo sapiens,” Potts says. “It's thought to be the first to have controlled fire and to build shelters.”

Gurche created a bronze fireplace with a Homo heidelbergensis crouched behind it, handing food across the coals of the fire. He put a small, bronze bench on this side of the fire.

“The visitor has to sit down across from the Homo heidelbergensis in order to complete the artwork ... to take this offer of shared food," says Potts. "The visitor becomes part of the piece and that's a really beautiful moment.”

To construct life-like sculptures, Gurche consulted with artists in the special-effects makeup industry. These experts — including Dick Smith, who designed David Bowie’s old-age makeup for the movie, The Hunger — helped Gurche find the most useful materials.

“I'm now a firm believer in silicone,” Gurche says. “[It’s] a really great material to use because you can tint it any color, you can control the luster and the amount of translucency — you can control pretty much everything. It's also soft enough to punch hair into. So it’s pretty much the perfect material, I think.”

Gurche, Potts and the Smithsonian’s other curators wanted to create poses that would reflect the signature actions and characteristics of each species. “It's one thing to talk about the forensics and the anatomy,” Potts says, “but what should we have these early humans doing?”

You can see for yourself at the Smithsonian in Washington, DC, or check out Gurche's book, Shaping Humanity: How Science, Art and Imagination Help Us Understand Our Origins.

Editor's note: This story was updated to fix a quote that was originally attributed to Rick Potts rather than John Gurche.