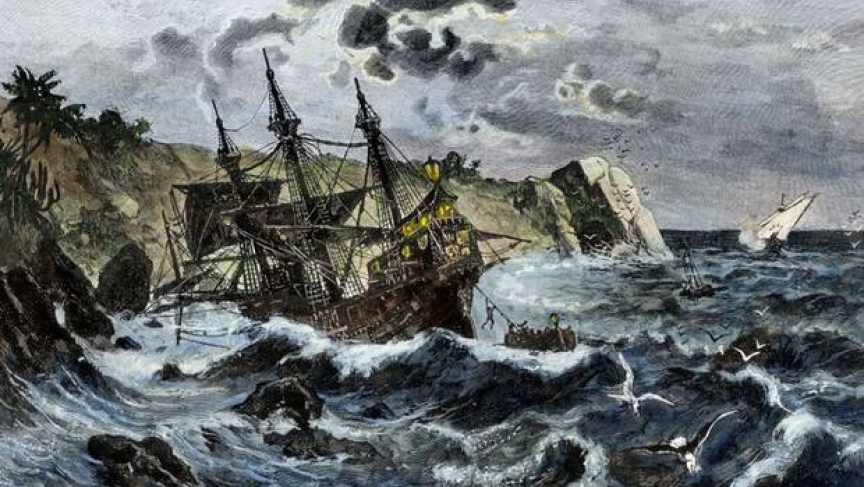 An artist's rendition of the wreck of the Santa María.

When Christopher Columbus first came to North America, he traveled on three ships: the Niña, the Pinta and the Santa María. Two of the ships survived the trip, but the Santa María ran aground off the coast of what is now Haiti.

Columbus stripped much of the ship for materials to build a fort. Then the skeleton slipped beneath the waves, where the wreck was lost to time.

But this week, searchers came forward saying they believe they have located the remains of the Santa María. It turns out they had actually found it a decade ago, but needed more data to realize what they had discovered. The Independent has the story of what comes next for the ship believed to be the Santa María.

In the end, was NATO's intervention in Libya good for the country and the West?

NATO lost no lives and spent just $1.1 billion on its military actions against Muammar Gaddafi's forces in Libya during the early days of the Arab Spring. The rebels won, Gaddafi died and a new democratic government was installed in Libya. All good, right?

Now the news site War on the Rocks is taking a deeper look at what has been considered a successful intervention and finds the seeds of Libya's current chaos in it. Libya is still roiled with violence and US interests in the region are probably less secure than they were before Gaddafi was forced from power. So, by that measure, was the intervention really all that successful?

London has some of the best Indian food you can find outside of, well, India. It's a legacy of Britian's colonial ties to India, when people often moved back and forth. And that cuisine has never strayed far from the original, until now.

PRI's The World looks at a new crop of Michelin-rated Indian restaurants that are taking new liberties with traditional cuisine and going upscale. $130 tasting menus featuring six courses? You better believe it.

No, I will not stop kissing my camels

Saudi Arabia has a major problem right now with MERS, a form of Corona virus that first appeared in the country in 2012 and has since spread around the world. So far, 133 people there have died of the viral infection.

In an effort to stop the spread of the virus, Saudi health officials have called for people to refrain from eating raw camel meat or drinking camel milk, and to wear masks and gloves when dealing with the creatures. But these new health measures have proven unpopular, especially on social media. The BBC's News from Elsewhere blog looks at the controversy that has led people to show themselves kissing their camels.

How do you say 'Watch out for the bees' in elephant?

PRI's Science Friday takes us into the ears of elephants to show how slight changes in vowel-like sounds, at pitches imperceptible to human ears, can change the message elephants are sending each other. As one example, researchers studied how elephants sound and react when they're approached by humans, and by bees. It turns out the elephants' overall reaction — to flee — seems the same, but the nuances of their reactions are not. And elephants can communicate which danger they see.

The research is actually providing insights into ways to help humans and elephants live together in peace, specifically by harnessing their intense dislike for bees.

A slow-moving storm system is bearing down on eastern Europe this week, with heavy rain forecast for Bosnia and Herzegovina, Romania and Bulgaria on Wednesday. The situation could lead to local flooding, according to AccuWeather, when some areas receive as much as five inches (12.7 centimeters) of rain. The storm is expected to move north Thursday and stall out over the weekend.