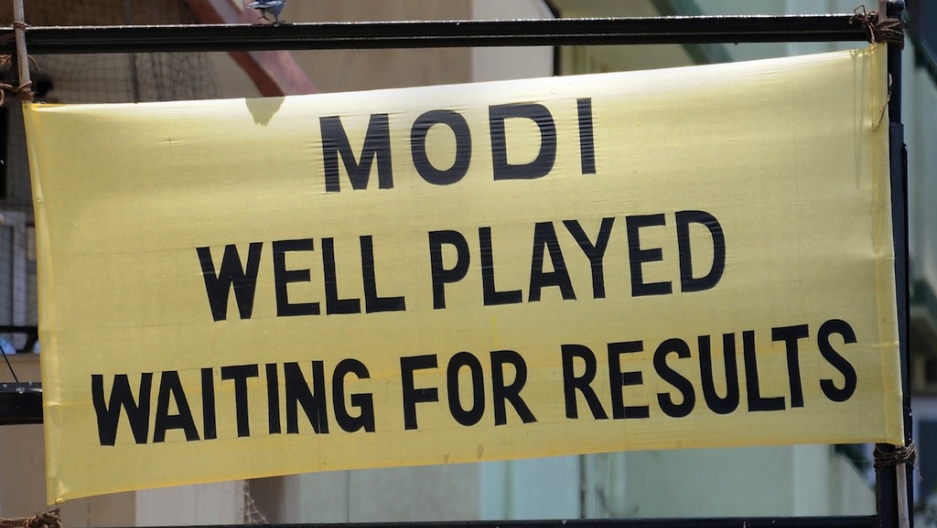 Though such polls are no guarantee of victory, the numbers support the dominant story in this election: that voter discontentment with the incumbent Indian National Congress and hunger for stronger economic growth would sweep the popular, internet-savvy Modi and his Bharatiya Janata Party (BJP) to power.

Modi has enjoyed overwhelming public support despite concern among religious minorities, social justice advocates and political opponents that his brand of political Hinduism is dangerous, running counter to visions of an inclusive Indian democracy.

The most cited reason for this concern is Modi's role as chief minister of the state of Gujarat during the 2002 communal riots that claimed more than 1,000 lives, mostly Muslim.

Modi has declined to apologize for failing to stop the riots, and has also been accused of fomenting the violence. In recent years Modi has taken steps to reconcile with India's Muslims but is still considered a threat by the majority of that community. He is currently in his fourth term as chief minister of Gujarat, creating a signature blend of Hindu nationalist rhetoric and neoliberal economic policy that has inspired a saffron-infused movement across India this year.

More from GlobalPost: The Saffron Election, a Special Report

The results of this year's parliamentary elections will be announced Friday, with the BJP-led National Democratic Alliance (NDA) aiming for a majority of 272 seats to form a government. If it falls short, it will need to form a broader coalition to govern.

Current polls suggest the NDA will win between 249 and 340 seats. At the upper end of these projections, the BJP could actually win a majority by itself, the first time that has been done since Congress won a landslide in 1984 following the assassination of Prime Minister Indira Gandhi.

Voter turnout in these elections, the largest in the world, reached more than 66 percent, higher than the 64 percent that turned out in the wake of Gandhi's 1984 assassination.

In anticipation of the results, Indian markets have surged to record heights as analysts anticipate a pro-development, pro-investment Modi administration.

"A strong government that understands the need for infrastructure should be able to get reforms in place and put in place the conditions for long-term growth,” Salman Ahmed, global fixed income strategist for Lombard Odier Investment Managers in London, told Reuters.

The Indian press sees signals that the United States is ready to receive Modi, though there has been no official change in his visa status, restricted since 2005.

Meanwhile the long-dominant Indian National Congress is looking at the very real possibility it will hold its smallest parliamentary presence in modern Indian history.