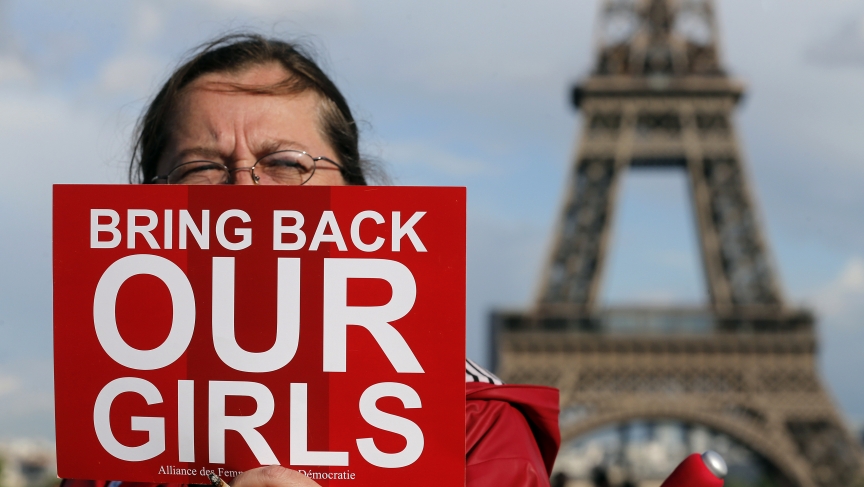 A protester at Trocadero Square near the Eiffel Tower in Paris demonstrates against the kidnapping of school girls in Nigeria.

The trauma of Nigeria's abducted girls continues to haunt the world, online and off. But all the global media attention to the kidnapping is not necessarily what's needed.

At least, that's what Zeynep Tufekci of the University of North Carolina, Chapel Hill, says.

"I'm really not against this outrage, because how can you not be outraged?  It's obviously an awful human tragedy," Tufekci says. "But just sort of waving technology ... or sending soldiers unilaterally or just sort of making a public relations campaign out of it ourselves, I don't think that's helpful."

Tufekci has spelled out her reservations in a piece in the online publication Medium. It's called "#Bringbackourgirls and the complexities of attention: Navigating the power of attention when it is part of what the cruel seek."

The battle against the extremist group that's taken responsibility for the abductions — Boko Haram — might become even more complex under the glare of the global spotlight, Tufekci warns.

"It can potentially create an environment in which the girls' lives and the future of people in that region are now more in peril, because now all of sudden they have become pawns in a bigger game. And this group, this terrorist group Boko Haram, has now reeled in 'the Great Satan,'" Tufekci says. "And what would be dangerous is if policy gets over-determined by people with other agendas, with big powers and in ways that don't empower Nigerians who are the only people who can solve this problem."

To be clear, Tufekci is not blaming those who seek to bring attention to the abductions. And she says it is possible that all the attention to Boko Haram might in fact weaken the militant group.  She offers as an example the waning of support for Egypt's "Al-Gama'a al-Islamiyya" after it slaughtered 62 tourists in Luxor in 1997.

That sort of disgust with a terrorist campaign might not take hold among Boko Haram's supporters in the north of Nigeria.

"What's dangerous is that the kind of attention that could smother Boko Haram ... could be countered if they get a new unpopular enemy that they can pretend they're fighting against, or that they can create this 'Oh, look, we're fighting the Great Satan,'" she says. "This very well-meaning hashtag campaign would be taken to create the basis of the kind of policies that have not been good in the past."

And not all Nigerians are welcoming the foreign presence in the west African state.  Just last week The World spoke with Nigerian Dr Fatima Zanna Gana in the capital Abuja who had been receiving frantic text messages from her sister further north. Gana's sibling was terrified about the arrival of Americans there and associated help from the West with the possibility of a dangerous foreign military intervention.

The reaction does not surprise Tufekci.

"In the United States we have this habit of starting history from yesterday, whereas the rest of the world has a longer memory. The Iraq War is not a long time ago," she notes. "For most of the people around the world, they're just looking at previous Western interventions and none of those ended well in recent history."

Tufekci stresses that she does not oppose the US, the UK or another world power taking "reasonable steps" to assist the Nigerian government under an international framework.

"But if we just sort of go in almost expecting to be a RoboCop to save the world, we're just going to make things worse for everyone involved," she says.

So where does this leave the average person outside Nigeria who wants to "do something"?

"The 'do something' impulse especially in crimes against humanity is a great one.  What has to be realized is ... the impulse needs to be taken and applied between the crises," she notes.  "Asking our government that is not involved, is not selected by Nigerians, to just 'do something,' it sounds reasonable.  We're a powerful country shouldn't we be able to do something?  But once again, given the history and given the context, that's not the best impulse.  Our question should be: how do we create a world in which something can be done?"

The job, Tufekci says,  doesn't start with the hashtag.  And it doesn't end when the hashtag stops trending.