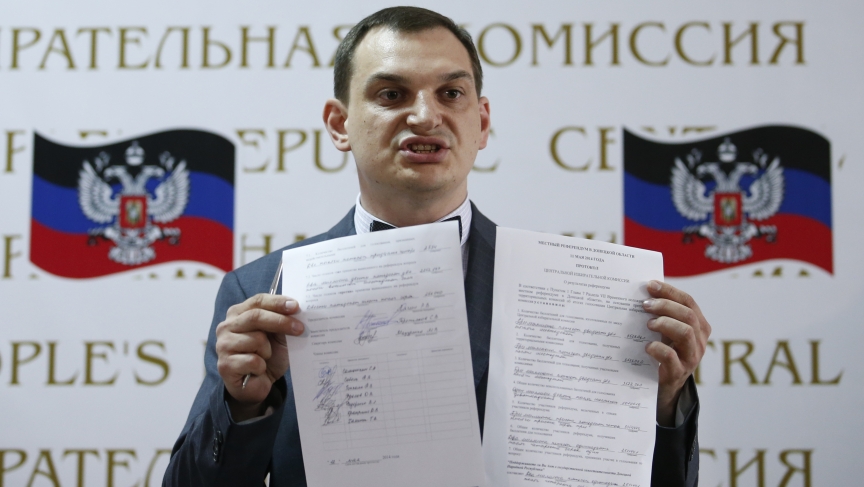 Roman Lyagin, head of the electoral commission in Donetsk, holds up the results of the referendum on the status of the province, during a news conference Monday. Pro-Russian separatists say they received overwhelming support.

The future of Ukraine is in doubt as two eastern provinces look into breaking away and joining with Russia.

Pro-Russian separatists say they won an overwhelming share of the vote in referenda on Sunday on self-rule.

Voters went to the polls in two provinces, Donetsk and Luhansk.

The White House has dismissed the referenda as illegal, and says it will not recognize the results.

The government in Kiev has denounced the polls as a farce.

Events seem to be mirroring, in many ways, what happened in the Ukrainian province of Crimea in March, prior to its annexation by Russia.

But there are also differences, according to the BBC’s David Stern. "If we are talking about Crimea being a very flawed vote, this one made Crimea look like a democratic process.”

Separatist leaders in Donetsk have already sent a request to Moscow, asking to join Russia.

The Luhansk separatists say they may soon hold a second referendum on joining Russia.

Russia is so far keeping the separatists at arm’s length. But that could change according to Stern.

“It’s not what Russia says,” says Stern, “but what it does on the ground.”

Meanwhile, the separatists are seeking to set up government institutions, with priority going to setting up an army.

The goal, according to separatists, is to drive out “occupying forces.”