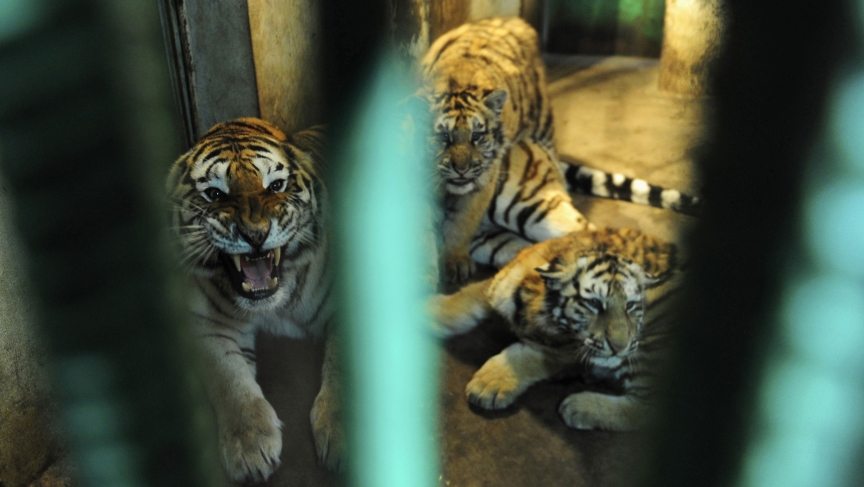 Siberian tigers in a cage at the Siberian Tiger Forest Park in Harbin, China. Journalists Stuart Leavenworth says the tigers at the facility are raised primarily to supply the illicit market for tiger bone wine.

China's caught a lot of flak in recent years for its lax attitude toward the trade in endangered species. That's slowly starting to change, but there are still stark examples of the government actually contributing to the problem.

Reporter Stuart Leavenworth of McClatchy Newspapers has just brought one of these examples out into the open — China's network of tiger farms. They are billed as wildlife parks for tourists, but Leavenworth found they're really something quite different.

Leavenworth went to several of the tiger farms. The first was in Harbin, in northern China, where he says workers loaded tourists onto buses, drove them into a large gated yard with 20 or more tigers, and had them watch while somebody threw a live chicken out the window of a Jeep, which the tigers quickly ripped apart.

“Initially I was appalled by what I saw with the chickens,” Leavenworth says. “But then I realize there's a much worse situation going on, and that's that these parks exist to make tiger bone wine.”

Tiger bone wine is an ancient concoction that many Chinese once believed would make someone who drank it strong and virile. Leavenworth says there are still a lot of people in China who seek it out, mainly older and very wealthy, and he says a government ministry started the tiger parks as a way of meeting that demand.

Not long ago, northern China was filled with Siberian tigers, Leavenworth says. “Traditionally (locals) would kill a tiger and use the bones to make wine. ... At some point somebody figured out, if we could breed them, we’d have a lot more bones and we can make a lot more wine.”

The government argues that the tiger farms alleviate the pressures to hunt wild populations, but Leavenworth says they’re actually having the opposite effect.

“It certainly is the supply-chain” for tiger bone wine, he says, “although the government would not admit it now. And the presumption is there’s still hunting and trapping of tigers to improve the gene pool” for the parks.

In addition, he says “people who are true connoisseurs want to buy tiger parts, tiger bone wine, from wild tigers. So this entire trade increases the demand for hunting wild tigers.”

The good news of the story, Leavenworth says, is that the Chinese, especially young people, are increasingly concerned about the exploitation of animals. And he says the national government recognizes that the country is getting a bad reputation for not enforcing its own laws on endangered species.

This spring, a committee of the national People's Congress moved to toughen up a law against the consumption of any kind of protected animal.

Leavenworth calls that an important step, but he says it’s not nearly enough to change the fate for the few Siberian tigers still live in China.

“There’s discussion of a really comprehensive animal welfare law in China,” he says, “but these things are happening extremely slowly. And for wild tigers in China they’re probably not happening fast enough.”