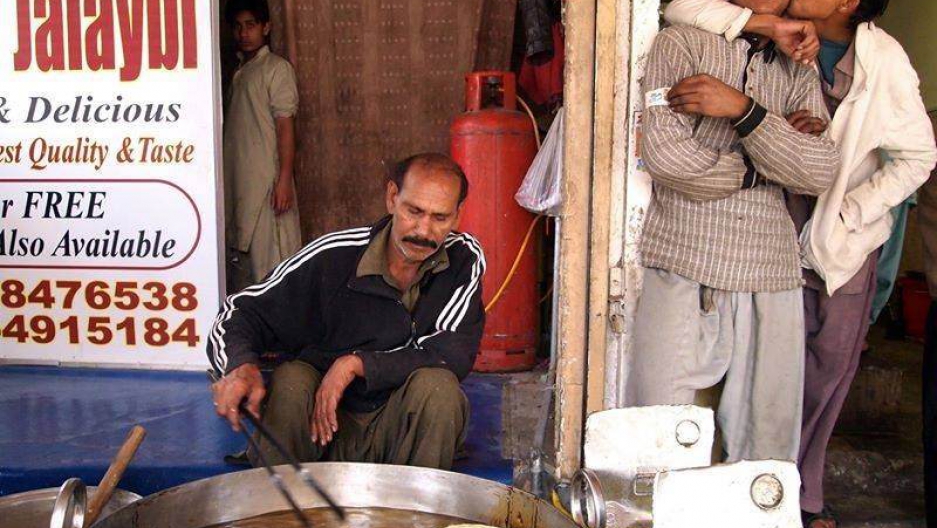 Not everyone hides their feelings in Lahore.
Credit: Patrick Butler
Share

“Gay rights are human rights,” says one, arguing that gays have the right to live openly here. This is Pakistan, the other countered. “It is best to let these things stay unsaid, and underground – it's not okay in this society.” It’s a debate so fundamental that it might, at this point, sound hackneyed to a Western audience — yet in Pakistan it’s rare to hear such openness even in a private discussion.

In late April, a young man named Muhammed Ejaz confessed to killing three gay men over the past two months because he wanted to send a warning about the “evils” of homosexuality.

The 28-year-old paramedic from Lahore said he had lured his victims through a gay social networking site manjam.com and killed them following a sexual encounter in their own homes.

Ejaz, a father of two, said his hatred against gays springs from his being abused by an older man when he was 10.

“I have hated them ever since that happened to me," he said in an interview from his prison cell aired on Samaa TV. "By killing these men, I wanted to warn them to stay away from this evil of homosexuality.”

In Pakistan, where homosexuality is illegal, these killings have set off panic in the already closeted gay community.

"I deactivated my account initially after the news of the killing broke on social media because I was scared that the killer Ejaz will be portrayed as a hero locally," says 31-year-old Amir Shah from Lahore, who belongs to the popular manjam.com site. "You’ll find many people who would buy into his philosophy that homosexuality is an evil.”

Gay people in Pakistan can’t go to gay clubs: They don’t exist. Many say the internet was the best thing that ever happened to the community — until now.

“In the absence of any type of gay hangouts, we only rely on the dating sites, mobiles apps and groups to make friends but with this incident even that has become unsafe,” said Shah.

Still, in this conservative, Muslim country where any kind of sex outside marriage is taboo, gay partners in some cases receive less scrutiny than unmarried heterosexual couples.

“I have never had any problems finding a partner for myself or dating openly because I guess when two boys are together and they draw less attention to themselves than the boy-and-girl couple," says 29-year-old Ahmed Butt from Chakwal, near Lahore. "I don’t think it is hard to be gay in Pakistan, at least it works for me.”

Still, Butt, who is also an active moderator on onlylads.com, another gay social site, says the gay community feels increasingly threatened because these hate-crimes are generally applauded by the society.

“We then worry that this incident will encourage others from the society — that they would also want to kill the ‘evil’ within us,” he says.

The sensational interview of the killer by Samaa TV portrayed him as the epitome of righteousness, a view shared widely on the street.

“I stand with Ejaz and the courage he has showed to wipe these devils off from our holy land — Islam doesn’t approve of homosexuality so who are we to let these people live among us,” says Mohmmad Naeem 35-year-old roadside vendor in Lahore.

Noor Ata, a 22-year-old student of law in Karachi agrees.

“We can’t blame the killer for his acts, it is illegal to indulge in any homosexual activity and the government has failed to stop such obscenity," he said. "As a result, pious people like Ejaz are forced eliminate evil themselves.”

Persecution is a constant threat to the gay community, members say, even as all but the most egregious incidents remain unreported or out of the spotlight.

In 2003, three Pakistani men were arrested in Lahore for engaging in homosexual acts after one of their relatives turned them in following a private party.

Another incident in 2005 involved the nuptial ritual of a gay couple, 42-year-old Liaqat Ali and Markeen a 16-year-old Afghan refugee in the country. The pair had conducted a traditional tribal ceremony — gay marriage is not recognized in Pakistan, and this pair was reportedly the first to even hold a ceremony. A tribal council in their region of Khyber Pakhtunkwa in north Pakistan told the couple to leave the area in the north or face death because they had broken religious and tribal values.

Qari Hafiz-ur-Rehman, a 60-year-old cleric based in Kahuta, Punjab in an open statement in December 2007 said, “Homosexuals must be killed — it’s the only way to stop them spreading. It should be by beheading or stoning, which the general public can do.”

And in 2009, the 60-year-old watchman Muhammad Hashim Jokhio was pulled from his home and beaten to death with clubs and rods by a village mob in south Pakistan. According to police, Jokhio was ostracized by fellow villagers for his sexual preferences, and therefore, he lived apart from his family — not the norm in Pakistan.

Sociologists note the most recent serial killer case has highlighted another troubling aspect of the public discussion of homosexuality, and which contributes to the animosity towards the gay community.

“For me it is problematic how (the alleged killer) has confused child abuse with homosexuality,” says Asma Imran, an Islamabad-based sociologist.“These are two totally different things." Sexual abuse of children, however, is also a taboo topic in Pakistan.

Gay Pakistanis say they are pessimistic over an improvement in attitude toward their community.

"Yes, there will always be some in our society who’ll consider homosexuality a disease and would not accept that it’s a matter of orientation," says Raheel, 35, from Faisalabad, near Lahore. "Till that acceptance comes, we will see many like Ejaz who will kill gays.”

Others say the community must stand up for themselves.

“We can’t cease to live our lives for ourselves and instead live for the society," says 23-year-old Afzal Khan from Lahore. "I’m not scared at all, and I can’t sit and wait for a psychotic to kill me.”