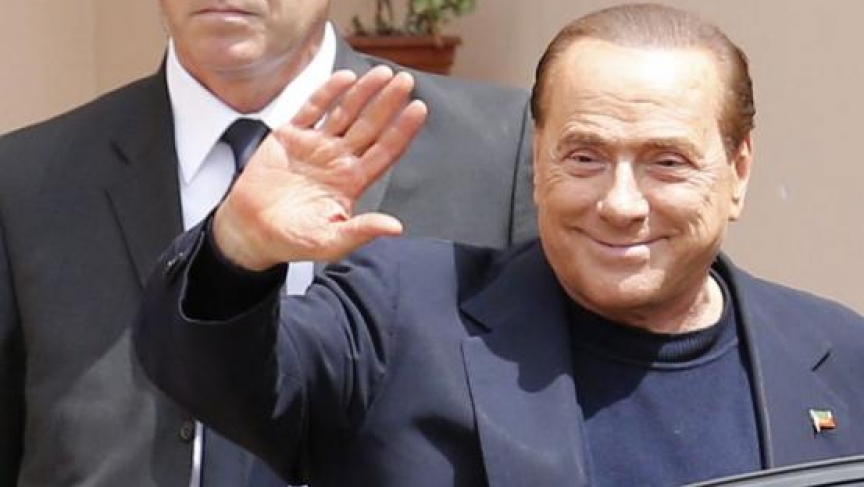 Former Italian Prime Minister Silvio Berlusconi waves as he leaves the Sacred Family Foundation in Cesano Boscone, a small town on the outskirts of Milan May 9, 2014, where he will serve part of his one-year tax fraud sentence by doing community service with the elderly.

Let's have a moment of fall-from-grace schadenfreude, shall we?

Silvio Berlusconi started his community service Friday. Italy's flamboyant former prime minister showed up for his first shift at a clinic for Alzheimer's patients near Milan.

He'll be working there a few hours a week for the next year. That's billionaire tycoon's punishment for committing tax fraud.

"We don't know, of course, because nobody's allowed inside," he says. "The interesting thing is he's taking care of these old patients. Allegedly he is taking classes to try and assist the Alzheimer's patients. His lawyers say he will serve with conscience and without any kind of attitude."

Riotta says that the Italian public is divided on Berlusconi's sentence of four hours per week of community service. He says some Italians believe "this is too lenient of a sentence, that he should have been sent to Siberia and locked up there forever."

At the same time, Berlusconi has been subjected to other kinds of humiliation.

"He's been stripped of his passport. In order to leave Milan, he has to ask permission from his judges. He lost his seat in the Senate, (and) he cannot run for the European election, so it's not a joke at all," Riotta says.

As for the chauffeur driven rides he gets to his community service venues, Riotta says not to expect him to take a cab or the subway.

He says the Italian judges would not allow him to do that because "he'd be mobbed by both his supporters and by people shouting obscenities, and I don't think the judges want that kind of political stunt."

The former prime minister has had an uncanny ability to seem like he's down, and then he's not. Does Berlusconi still have any chance for a political comeback?

Riotta says Berlusconi is a fighter and he's a survivor. "As a political leader, he's doomed, he's finished. But he still has a grip on let's say one-out-of-five Italian voters, and unless the center right manages to find another leader, he will continue to have that hold."