A "debarker" harvests a cork tree in Portugal. The workers are specially trained to strip a tree's bark in order to not harm the tree.

I never really stopped and thought much about the cork in my wine bottle, where it comes from or how it’s made.

“Cork is actually in the oak family,” explained Richard Z. Donovn, vice president of forestry with the Rainforest Alliance. “There’s kind of a whole tradition around harvesting the bark, you strip that bark, about every nine, 10 years, and you take those big strips, and you basically fashion them into cork stoppers.”

Cork trees generally live 200, 220 or 250 years. Stripping the bark actually helps them live that long. Most of the world’s cork groves are in the Mediterranean — Spain, France, Italy and North Africa, with Portugal being the biggest producer. 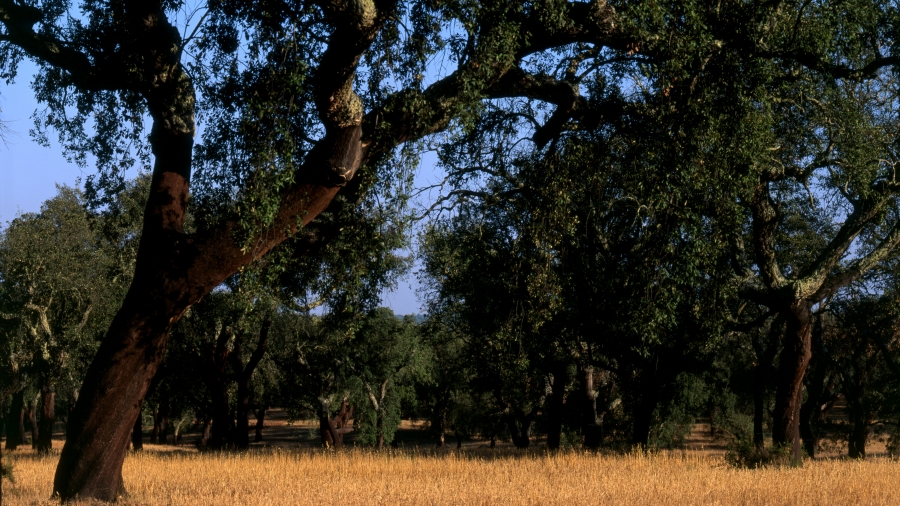 Cork groves in Portugal, home to rare and threatened species of animals like the Iberian Lynx and Iberian Eagle. The fictional bull Ferdinand also liked to lay under a cork tree.

“These forests and these ecosystems are very peculiar, very particular,” said João Rui Ferriera, president of the Portuguese Cork Association. “It’s considered one of the most important biodiversity hotspots in the world.”

They’re home to rare plants and trees, as well as mammals and birds.

Donovan wants you to know something else about cork groves: Those trees are helping in the fight against climate change. The big trees suck the greenhouse gas carbon dioxide from the atmosphere, then retain the carbon in their wood.

“By having these long-lived trees, you’ve got, in essence, kind of carbon fixing factories,” Donovan said.

But he worries if cork farmers aren’t making money stripping their trees, “Well, what’s my incentive to replace that, manage it, keep it vibrant, keep it doing what it’s doing?”

Cork bark has many uses — it’s also used in shoes and floors. But cork farmers make the bulk of their money selling wine stoppers. They can charge anywhere from a quarter up to $1.50 for each cork stopper. That’s one reason alternative screw caps and stoppers have been slowly eating away at the cork bark’s centuries of market dominance.

Ferriera estimates cork stoppers are now used in about 70 percent of the world’s wine bottles. That’s better than a few years ago, and Ferriera would like to keep the trend going back toward cork.

“The risk is that if we keep losing market share, there is the risk some of these private landowners, they will change from planting cork oak trees to more intensive agriculture. Or even, they can think to change these forests into urban areas,” Ferriera said.

By law, Portuguese cork farmers can’t actually do that: cork trees are protected. But trees don’t last forever. The cork farmers aren't obligated to re-plant cork. And grove owners also aren’t obligated to strip their trees, which prolongs a cork tree’s life. Cork growers who aren’t making money can also plant more profitable trees in their groves, which could crowd out the cork.

So, lesson learned: If winemakers — and wine drinkers — want to support the planet, buy cork! If only it were that simple.

The bark of the cork trees are harvested roughly once every nine years.

If you want to know what stopper to use, you turn to Heisey. She said most of her clients care first about what closure is best for their wine — allowing the wine to breathe, but not breathe too much — then price, then image. She says, environmental concerns are a distant fourth. Still, many winemakers do care. I asked Heisey if she recommends cork.

“In the case of cork, it seems very natural on its face coming from a forest, but it actually takes a lot of resources to take care of the cork and transport the cork, so it would be a very complex study to go all the way back to the base materials from which a closure comes,” she said.

And where the closure goes. We’ve gotten pretty good at recycling plastic and aluminium, but recycling cork is still very much a work in progress.

“Then we have another problem, which is that corks are not being recycled, they’re in landfills,” Heisey said.

There are also new wine stoppers made from sugar cane, touted for their environmental benefits. Those sound promising, but remember, we need to keep cork trees standing to battle climate change. So while sugarcane stoppers could be good for the planet, perhaps better than natural cork, their success could also threaten critical cork forests.

So, wine lovers: If you want to do the right thing for the planet — I don’t know, it’s confusing. Maybe have a beer.