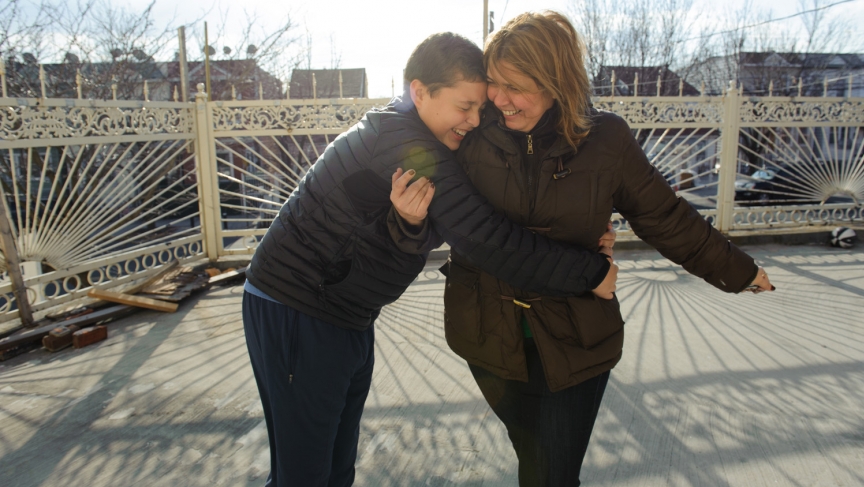 Blanca and her son, Guido, play in Corona, Queens.

Blanca doesn’t live across town from Guido, or even in a different state. She’s in New York City and he’s in Paraguay.

Ten years ago, Blanca came to the US, to make money to send back home. She’s worked as a nanny, raising other people’s kids. Moms like this, who live far away from their families, are sometimes called transnational mothers. And there are many in New York City and across the country. A good number work as nannies.

But now, after a decade apart, Guido’s coming to America to reunite with his mother. Blanca knows it’ll be complicated. She worries that Guido will miss his grandmother, who has raised him for the past 10 years.

I met her many times, but the first I saw her nervous was the day before her son’s arrival. So she was mopping her small apartment in Queens and getting his room ready.

Blanca isn’t even sure how tall Guido is now. It’s things like this that she’s missed while supporting his middle-class life, sending a chunk of what she makes back home.

She doesn’t know where he’ll go to school in New York or how they’ll get by. After all, Guido doesn’t speak English and Blanca’s surviving on only $30,000 a year.

I head out with Blanca to meet Guido at the airport. She leaves the house of the little boy she cares for. He’s the same age, 2 years old, that Guido was when Blanca left him back home. In the cab, she remembers why she left Guido in the first place to work in America. She was a nurse in her country. Even with her job supporting her son and mother was a struggle. She knew she’d make more in the States.

When we get to JFK airport, Blanca tells me about her long wait for Guido’s return and why she decided to bring him here. “One day, I had a very bad dream. I just saw Guido sitting in one place, in my house, and crying and crying and crying. And nobody’s there.  So, I said, I have to make the decision.”

She wonders what Guido will think of snow in New York? He’s never seen it before. Will he even recognize his mother? The plane is finally disembarking, but no Guido yet.

Finally, she sees him. “Hey! Hey! Mi muchachote!” Her “big boy” in Spanish.

Blanca tells Guido to put on the jacket she’s brought, but he doesn’t want to put it on. He says it’s not cold. It is their first mother-son struggle in America.

The jacket is too small. Blanca didn’t know his size.

The next day will be a new beginning in America but not an easy one. What lies in store for Guido and Blanca? Will he learn English? A week later, he starts a New York City public school.

Alissa Quart's reporting and Alice Proujansky's photography for this story were supported with funding from the Economic Hardship Reporting Projectand the Pulitzer Center. The print version of Alissa Quart's story for The Nation magazine is here: "Who Takes Care of the Nanny's Kids?"