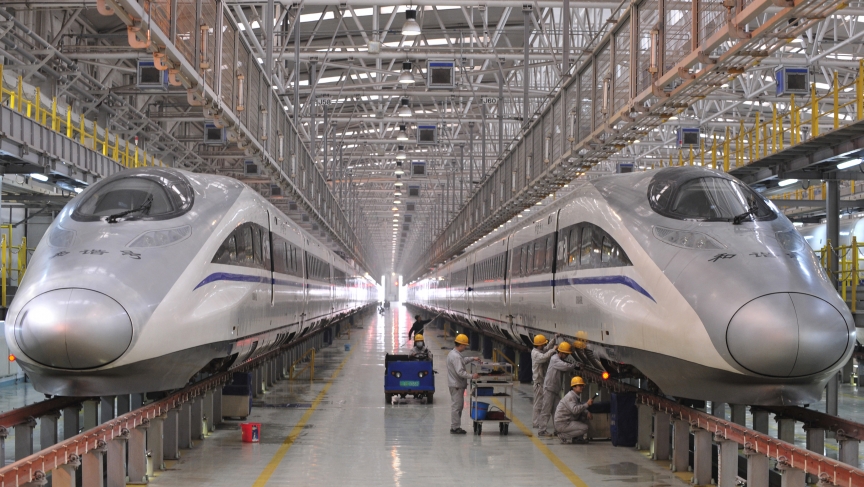 Employees inspect a bullet train at a high speed railway maintenance station, to prepare for the annual mass migration ahead of the Chinese lunar new year, in Xi'an, Shaanxi province January 7, 2014.

Just get on the 2:10 train from Seattle to Beijing, via Anchorage and Siberia. What? The Bering Strait, you ask? We'll just cruise under it.

If the idea seems far-fetched, it of course is today. But maybe not in the future. Chinese officials are considering a series of high-speed rail lines connecting China with much of the rest of the world and one line reported to be under-consideration would connect northeast China with the United States, via Siberia, Alaska and Canada. To do that, though, would require not only monumental amounts of money, but also monumental engineering achievements.

The Guardian looks at the proposal, which appeared recently in the official China Daily, suggesting it may actually be something more than a pipe dream. The two-day, 8100-mile journey would see trains traveling at an average speed of 220 mph.

Since the end of World War II, there's been a certain order to international affairs between states. Not everything was perfect, to be sure, but things worked in specific ways. But the Russian intervention in Crimea and Ukraine upset that order.

According to Al Jazeera, that intervention can be traced directly to the US decision to invade Iraq more than a decade ago. And while the news outlet goes to pains to say that American action in no way justifies Russia's actions, it does suggest the US is unable to respond because its cripled by its own past.

Your wine bottle is one way you can fight climate change

The stoppers in your wine bottle are usually made of cork, a sustainable, soft wood product harvested from trees in the Mediterranean region. Those corks are expensive, costing as much as $1.50, which means some winemakers are moving away from them, to synthetics and screw tops. That might seem like a big deal in and of itself — perhaps it's even good for the Earth.

Until you think about climate change, and just how cork is harvested. PRI's The World spoke with cork growers and learned that the trees, which can live 200 years or more, are major sinks for carbon dioxide. If the corks go away, so do the trees.

This is where we keep the mop, Silvio

Silvio Berlusconi, the former leader of Italy and TV magnate, began serving his sentence for tax fraud today. But because of his age, (he's 77) he's not serving his time in jail, rather by doing community service. Once a week, for a year, Berlusconi must appear at a Catholic hospice center and do public service work.

The Guardian explains Berlusconi's current fortunes and what brought him to this point in his political career.

The #BringBackOurGirls campaign has been an undeniable success. What was once a horrific yet largely ignored crime has suddenly burst into the public's eye — with an attendant international response. And the social media campaign was very much responsible.

Unfortunately, as PRI's The World details, the photos at the center of the campaign were not even of Nigerian girls, nor were they taken even in the last decade. Meet Ami Vitale, the photographer who took photos in 2000 of women and girls in Guinea-Bissau that became the centerpiece of the Nigeria campaign — without her knowledge.

Via @Vinncent: There really are thousands of ppl occupying land near #Brazil's World Cup opener pic.twitter.com/yGqzInonTY

Taishan, China, is soaked. In the last 24 hours, the city in southeast China has reported upwards of 400mm, 16.5", of rain. Temporary shelters have been opened to house those flooded out, according to AccuWeather.