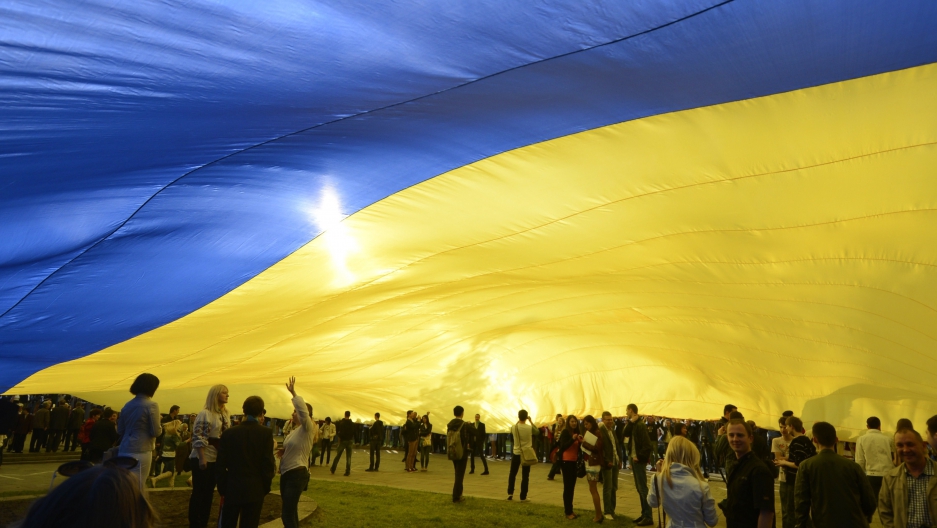 LVIV, Ukraine — If geopolitics were child’s play, the opponents of Ukraine’s revolution might well point their finger at this western city and say: you started it.

A bastion of Ukrainian nationalism and the engine of the uprising in Kyiv, Lviv provided the moral and logistic support for the months-long revolution that toppled President Viktor Yanukovych in February.

But as the crisis has risen to unprecedented levels few could have predicted, people in this patriotic stronghold are finding there’s little they can do to stem the violent separatist conflict in Ukraine’s east.

Meanwhile, an atmosphere of blissful isolation has descended upon this city, which once bustled with revolutionary activity.

“I think there’s a feeling here that this wave [of violence] won’t make it to the region, and that it’s better to simply wait and see what happens,” said Halyna Tereshchuk, a Lviv-based journalist.

On a recent, chilly evening here — as shootouts rippled across eastern Ukraine and the death toll of the government’s “anti-terror” operation there mounted — a four-piece street band serenaded a youthful crowd outside one of the city’s many cafes.

Tucked into an alleyway of cobblestones and charming imperial-era architecture, locals sipped coffee and shared jokes, occasionally burrowing into their fleece blankets from the slight nip in the air.

Meanwhile, hordes of tourists flowed through the central square, stopping at souvenir shops and for photos with historical re-enactors.

On the other side of the country from the chaos in the east, they might as well have been a world away.

The atmosphere represents a marked change from the heady days of January and February, when the city was abuzz with demonstrations and other revolutionary activity.

Back then, protesters occupied the regional administration building, self-defense members shuffled back and forth in shifts to Kyiv, and a coordinated effort to dispatch everything from warm bodies to food helped define Lviv’s central role in the revolution.

But since Yanukovych’s long-awaited ouster, the stakes for Ukraine’s future have risen immeasurably.

Since Russia snatched away Crimea, disenchantment with the new post-revolutionary authorities has grown and, for now at least, one of the country’s eastern regions — the industrialized, pro-Russian Donetsk — is still slipping from Kyiv’s grasp.

Meanwhile, an increasingly volatile information war between pro-Ukraine supporters (“fascists” to their opponents) and their pro-Russian counterparts (“terrorists” to theirs) has broadened Ukraine’s already significant social and political divisions.

For many in Lviv, especially those who kept the revolution humming, it’s a stressful situation.

“Many of my friends are even saying, ‘That’s it — I’m going somewhere for a few days where there’s no internet or anything else,’ because it’s all very difficult psychologically,” says Iryna Chulivska, a 22-year-old journalist and Lviv native, of the upcoming May 9 holiday weekend.

Officials say they’re preparing for potential provocations around that date, which marks the Soviet defeat of Nazi Germany but has traditionally been a flashpoint for tensions between pro-Russians and Ukrainian nationalists, who view the Soviets as an occupying force and often idolize war-era insurgents who fought alongside the Germans.

Observers say the feeling of exhaustion in Lviv comes after locals here poured so much emotion and energy into a revolution they’d hoped would end with the former autocrat’s ouster, but which has instead escalated into an international crisis.

That a significant number of the more than 100 protesters killed during clashes with police in February — dubbed the “Heavenly Hundred” — were from Lviv has contributed to the region’s sense of fatigue.

Despite Russian President Vladimir Putin’s call on Wednesday for the violence in eastern Ukraine to end, there’s still an element of danger for locals who are taking their activism to the front lines there.

As the conflict in eastern Ukraine has intensified, so has the resolve of the armed, pro-Russian militants who have seized official buildings across eastern Ukraine and still roam with virtual impunity.

It’s become hostile territory for many Ukrainians who have fallen victim to a spate of kidnappings and murders that have proliferated under mob rule in rebel hotspots such as Slovyansk.

“For people to travel to Donetsk, it’s like leaving as a piece of meat to be slaughtered, and people understand this,” says Tereshchuk, a correspondent for Radio Liberty.

That illustrates just how quickly and sharply the situation evolved from a political uprising into what some are calling a civil war.

Even when the conflict over Crimea was still unfolding, some say they held back from traveling there for fear of worsening the situation.

“It would only have reinforced their propaganda that ‘the Banderites’ were on their way,” says Mykhailo Mosin, a 23-year-old political organizer, referring to the WWII-era partisan leader Stepan Bandera, a hero to many here whose name has become a derogatory slur used by Russian media to describe the allegedly “fascist” pro-Kyiv supporters.

That hasn’t stopped Mosin and his colleagues from contributing to the cause here in Lviv, however.

These days, he and others are focusing on organizing boycotts of Russian products, coordinating medical efforts for those injured in last winter’s clashes on the Maidan, or Kyiv’s Independence Square, and providing material and logistical support for refugees from Crimea.

They’re also working to prevent the sort of actions — such as provocative ultra-nationalist marches — that could stoke conflict and play into the Kremlin’s image of western Ukraine as a “fascist” heartland, especially during the upcoming holiday.

Still, Myroslav Marynovych, vice rector of the Ukrainian Catholic University in Lviv and an outspoken protest supporter, says although the months of revolutionary fervor have worn down many Ukrainians here, the “energy of the Maidan hasn’t disappeared.”

But he agrees there’s only so much western Ukraine can do to end the wave of separatism that’s washed over the rebellious east.

“The time has come for the east to sort things out for itself and to decide whom it’s with,” he said. “We can’t do this work for them.”