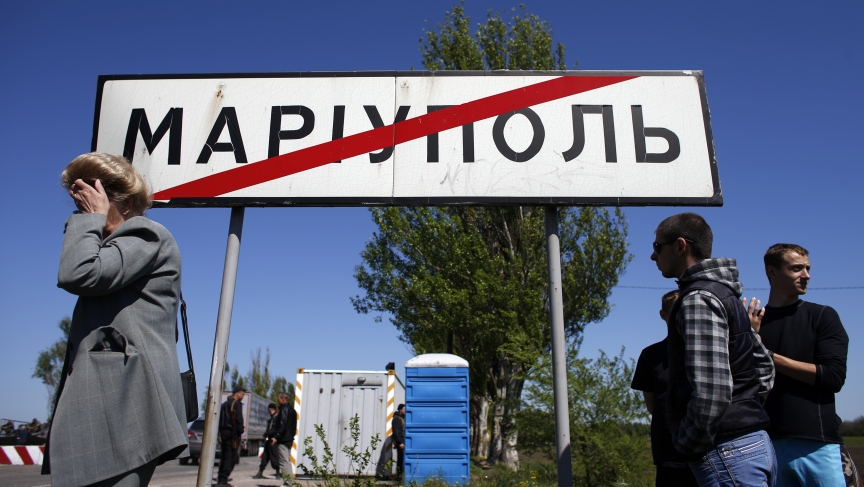 Locals stand near a checkpoint in Mariupol, eastern Ukraine May 7, 2014. Ukrainian forces seized the rebel-held city hall in the eastern port city of Mariupol overnight, driving out pro-Russian activists, then withdrew, making no attempt to hold onto the building.

Time Magazine's Simon Shuster sent out a tweet that got our attention.

Fresh story: How getting pistol whipped by a random yokel helped me see the blurry battle lines in east Ukraine. http://t.co/ys7ZvMHR3B

We've talked with Shuster throughout the conflict in Ukraine. And we had to know what happened. In an amazing article for Time that you should really read, he started off his tale thusly:

On Monday night, my car was stopped at a barricade made of tires and trash near Konstantinovka, one of the last hamlets to slip from the government’s control, about a week ago. The checkpoint was manned by about a dozen local men in civilian clothes, nearly all unarmed and extremely jumpy from news of the nearby battles between their pro-Russian comrades and the Ukrainian troops. The only armed man at the checkpoint was dressed in a black Adidas tracksuit and sneakers, and without saying a word to me, he pulled me from the car and cracked me on the head with the butt of his pistol. It wasn’t clear then, and it’s not clear in hindsight, whether he counts as a terrorist, a freedom fighter or just an average thug.

Only after hitting him in the head with the pistol did the men at the checkpoint actually check his documents.

Shuster says the area is chaotic and even the term "separatist fighters" is an umbrella term that encompasses many different types of people. "There are regular criminals who are in this to gain some loot," he says. "There are regular civilians who are mixed up in this and volunteer to work as nurses. And then there are people with military training and military gear who are leading the forces."

Shuster had the bad luck of meeting one of the thugs. Once the thugs realized he was who he said he was, they panicked and called in their commander. This guy, toting a shotgun and wearing a bandolier of shells, drove to the checkpoint in what looked like Hyundai. The commander was irritated his men attacked a journalist without provocation.

"That doesn't look go for them," Shuster says.

The commander took Shuster back to a makeshift headquarters to double-check Shuster's identity. There, a nurse attended to his head wound, staunching the blood. Shuster was already thinking about how to get himself out of the situation. He'd been captured earlier in the conflict and released hours later. But this time he thought he might be detained for some time.

His captors left him his cell phone. He used it to contact photojournalists in the area. The photojournalists called separatists they had previously interviewed to vouch for Shuster on Shuster's behalf. "Pretty soon I was releases," he says.

But there was an odd situation with Shuster's release. The separatists sent him to a safe house for the night. They wanted him to return to the headquarters the next day. He didn't go. His photojournalist buddies picked him up and took him out of the town. Only later did he find out why the men wanted him to return. They had caught the guy who pistol whipped Shuster. They wanted Shuster to be present when they punished him.

"I have no idea what they wanted to do with that guy," he says. "I mean, trying to figure out their motivations there are beyond my pay grade."