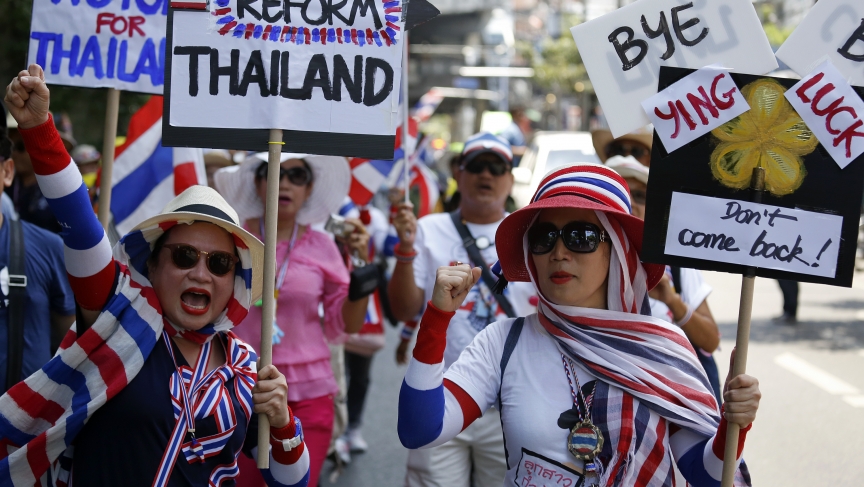 Anti-government protesters carry signs against ousted Prime Minister Yingluck Shinawatra as they march in central Bangkok May 8, 2014. Thailand's anti-corruption agency may decide on Thursday whether to pursue charges against Yingluck that could see her banned from politics.

Demonstrators in Thailand have been calling for the removal of their head of state for six months. Now, a Thai court has ordered the nation’s prime minister to step down over charges she abused her power.

Yingluck Shinawatra’s ouster raises questions about the stability of one of America’s major trading partners in Asia, not to mention a favored vacation spot among the jet set.

Patrick Winn, senior Southeast Asia correspondent for the Global Post, says Yingluck’s ouster is the latest of a series of moves by the Thai judicial system to remove democratically elected leaders from power. In this instance, the court ruled that Yingluck’s decision to transfer a civil servant three years ago amounted to an abuse of power. The court ordered her to step down, sacking all members of her cabinet who were in office when the transfer occurred as well, according to The New York Times.

“It’s becoming disturbingly routine,” says Winn, who is based in Bangkok. “In the past 10 years, this has happened multiple times; the voters will send someone to the PM seat, and the courts will remove them in what a lot of people call a ‘judicial coup.'”

This is the third time since 2006 a prime minister from Yingluck’s party has been forced out by the high court. The party was founded by Yingluck’s brother, Thaksin Shinawatra.

Winn says the most recent prime minster “comes from a political clan that is very powerful in Thailand ... known for coming up against the old guard and challenging the powers that be in Bangkok.”

Her ouster leaves many questions unanswered, including the fate of her Pheu Thai Party — which is calling for elections as soon as possible in an effort to retain power — and the future of democracy in one of America’s oldest allies in the region.

“You can think of Thailand and the US as strong allies and old war buddies,” Winn says. “Thailand is considered the stable linchpin in Southeast Asia. Or at least it was. Now it appears increasingly chaotic ... gripped by this battle over who gets to choose the leaders of the country.”

Winn says Thais are already discussing civil war as a potential outcome in Thailand, if the political climate can’t be stabilized.

“The protesters working to get rid of the prime minister are, of course, elated,” Winn says. “But their mission isn’t complete. They want to completely tear down the ruling party.”