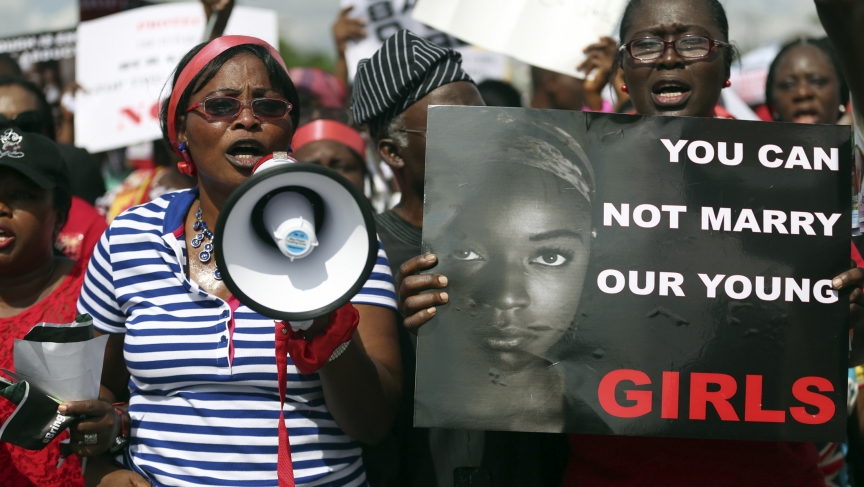 Protesters in Lagos demand the release of abducted teenage school girls from the remote Nigerian village of Chibok.

The saga of more than 200 missing school girls is challenging dated stereotypes of Nigeria as a nation where Muslims control the northern states and have little in common with the Christians who dominate the south.

"Anybody that's painting a picture of this division, it's a false story," says Fatima Zanna Gana, the founder of the Purple Heart Foundation and one of the leaders of the #BringBackOurGirls campaign. "There are Muslims and Christians mixed everywhere in Nigeria. And right now it's a turning point in our nation because we have all sorts of ethnic groups, we have Muslims and Christians that truly truly have the same mission — it's for these innocent children to come back to us. We're waiting for them, and for this to turn the face of our country in uniting us not dividing us."

Due in part to intense pressure from protestors, Nigeria's President Goodluck Jonathan agreed to accept assistance from the US, Britain and China to help in the search. A team of US specialists arrived on Thursday.

"My sister who lives in Maiduguri just sent me a very disturbing 'WhatsApp' message saying that they were told to expect American soldiers," Zanna Gana says. "She's really freaking out because — I'm sorry to say, no offense meant — but anywhere where there's a rescue mission going on we have a lot of innocents that go along with the mission. They're really, really scared."

Zanna Gana said she tried to reassure her sister that the foreign assistance was meant to quell the violence in Nigeria's northeast, not inflame it. She said few civilians in the region can find access to guns to protect themselves from Boko Haram because Nigeria's security forces confiscated local weapons years ago.

"The Army and the police collected every gun," she says. "They announced that anybody that had any ammunition anywhere should submit it to the police and if you are found with any kind of ammunition in your house that means you're automatically one of them. So every single person that I know in Borno State, they gave their ammunition away."

Zanna Gana was born in the Nigerian city of Kano and spent most of her life in the north. In recent years she's lost two cousins to the violence of Boko Haram. She says the militant insurgents prey upon the region's youth, press-ganging young boys into service.

"Some of them, they actually send messages to their parents telling them they want out, but they can't because [Boko Haram] are threatening their younger ones, they're threatening their old parents. So they have to stay and work for them," Zanna Gana says.

Boko Haram militants have killed thousands of Nigerians since 2009.