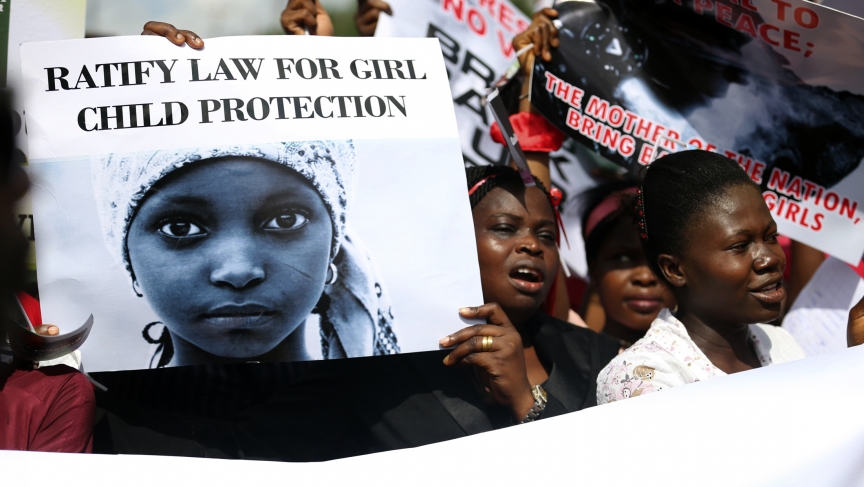 Nigerian women in Lagos protest to demand the release of abducted school girls.

Children kidnapped at gunpoint, marched through the West African forest and sold into slavery. This is not an image from the darkest times of the slave trade 250 years ago.

This is northern Nigeria today.

The Nigerian Islamic militant group Boko Haram has seized several hundred teenage girls over the past few weeks, marching them off into the thorny and remote Sambisa Forest, in northeastern Nigeria. This wilderness preserve covers an area the size of West Virginia.

The inept response from the Nigerian government has created a storm of protest among ordinary Nigerians and from the international community. Activists and concerned parents set up the #BringBackOurGirls movement on social media.

To add insult to injury, Boko Haram has announced that it might sell the girls into slavery. Apparently, human trafficking is common through much of west and north-central Africa.

“There is certainly a market,” says Nicholas Kristof, a columnist for the New York Times who has long attempted to raise awareness of the issue of slavery in modern-day Africa. The market, he says, “tends to be for younger children.”

“It tends to be somewhat less about sexual slavery than it is in other parts of the world, and somewhat more about labor trafficking. So it’ll be someone who needs workers, and they will buy a small child for fishing, for example, or in other cases for a wife," he says. "They will literally shell out money, usually through an intermediary.  In some cases the parents know about it and are desperate for money. In other cases the child is just kidnapped, or the parents have been promised the child will get some promising opportunity, and everybody is tricked.”

Kristof says these kids often become prisoners of circumstances. “When a child is kidnapped and sent off to work in inhumane conditions in some village, then that child — if he or she is uneducated — may not realize that this is illegal; they may not speak the local language. It may be very difficult to get away, and even if they do get away, they don’t know where to go; they don’t know how to get home.”

He adds “if it’s a girl who’s been married off, they might feel that once they have been raped by their new ‘husband’ that they no longer will be able to find a husband or partner ever again; that they have been shamed for life, and that all their other opportunities are destroyed.”

“All these ways of thinking imprison people,” says Kristof, “and make the system vaguely enforceable.”

But the nature of the market might impose some constraints on Boko Haram’s ability to sell these girls.

“People are willing to buy a small child,” says Kristof, “as that child is not going to be able to escape. If you buy an educated 17-year old girl, and pay money for her, then she is going to be much more of a flight risk. That’s why it tends to be illiterate peasant boys and girls, who are quite young, who tend to get kidnapped and sold.”

The girls taken by Boko Haram are mostly between the ages of 16 and 18.

There is a chance the girls have already been sold, perhaps abroad in neighboring countries like Chad or Cameroon. But Kristof says he’s hoping, because of the nature of the market, “it isn’t going to work as smoothly to sell these girls as Boko Haram might think.”