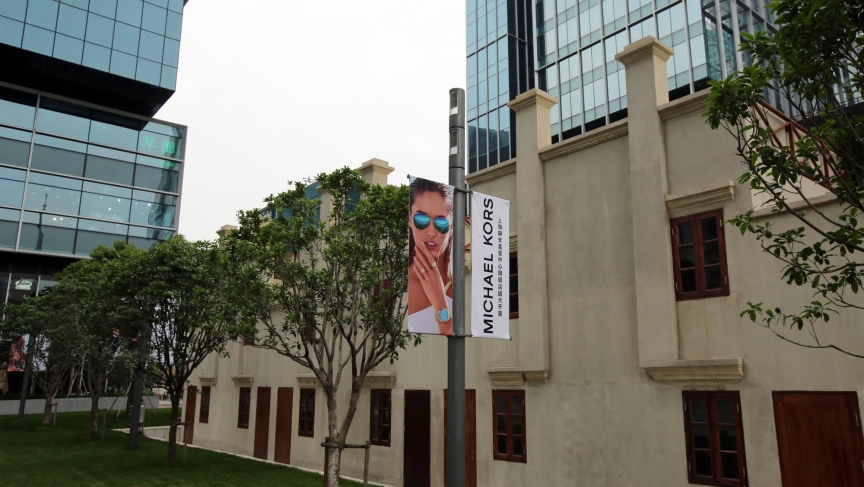 An apartment where Mao Zedong lived briefly in Shanghai has been opened as a small museum. It sits in the middle of the Jing An Kerry Center, which features glassy office towers and upscale retail.

Nestled in the middle, not far from a Ferrari display, there’s a narrow, two-story apartment. It was once the home of Mao Zedong — the founding father of the People’s Republic of China.

The fact that Mao’s old apartment is now wrapped in a mall goes to show how fast China is changing. Economic reforms ushered in by Deng Xiaoping after Mao’s death in 1976 steered China towards the market. Then came globalization and an information tidal wave.

Mao is still officially revered in China and all college students have to take a semester of Marxist philosophy and Mao Zedong Thought. In practice, though, China has moved a long way from Mao’s idea of a Marxist revolution for workers and peasants.

“For young people born around the reform and opening-up (period), Mao actually feels quite far away,” said Zhang Sheng, the historian who researched Mao’s old apartment before it opened as a small museum. Mao lived there briefly in 1920, washing clothes to earn his keep.

“There are many things they may find interesting, such as the Internet, music, American television series and movies.” He added, “Mao isn’t among them.”

That’s not to say Mao doesn’t have his admirers.

In remote Henan province, at the Democracy School, revolutionary songs rouse students from their bunks at 5 a.m. Then the principal, Xia Zuhai, keeps count as his pupils jog around the schoolyard. As if in a time warp, they run past portraits of Lenin, Stalin and Mao. After that, it’s off to the classroom, where they recite passages from Mao’s Little Red Book before breakfast.

“At the root of all the world’s problems are money and capitalist theory, and only Mao Zedong philosophy can solve this,” said Xia. He said he wants to free his students from material desires and encourage them to serve the people.

Asked about China’s single-party system, Xia, 49, said it’s the only way to ensure stability for China’s future. He added: “You can’t have two suns in the sky.”

But the school is dirt poor. There’s no heating in the winter, no hot water and no indoor bathrooms. It’s also very empty. More than half the classrooms are padlocked shut.

Principal Xia said at its height, his boarding school had nearly 600 students. Today there are just 18, some with learning disabilities. More and more families are moving to the cities, hoping for a piece of China’s prosperity. Others have moved their children to schools with more money and better facilities.

“Everything that the Chinese Communist Party stands for today — urban, finance-driven types of development — is everything that Mao stood against,” she said.

Karl, who has written a book about Mao, said the Chinese who admire Mao today tend to be older, nostalgic for what they remember as a simpler time. They credit Mao with bringing China to the world stage.

Others remember Mao as a dictator whose reckless campaigns led to the death of tens of millions from famine, purges and repression.

“Mao is so mighty,” Yang said of the early Mao years. “We need somebody like a savior and he appeared. He’s the God. He’s the hero. So everybody just listened to him.”

Yang’s own father died in the custody of Communist authorities in 1952. The family was told he committed suicide, but Yang never believed that version.

Yang said he hopes his private museum will help visitors draw lessons from the past. But he also wants people to enjoy the art. Independent of Mao and his mistakes, for Yang, this is an art collection.

Karl, of NYU, says what’s happening in China happens all over the world: foundational figures become unmoored from what they once stood for.

“Mao has now become part of a national myth,” she said, “and he then floats above history in a way that doesn’t require him to attach himself to history any longer.”