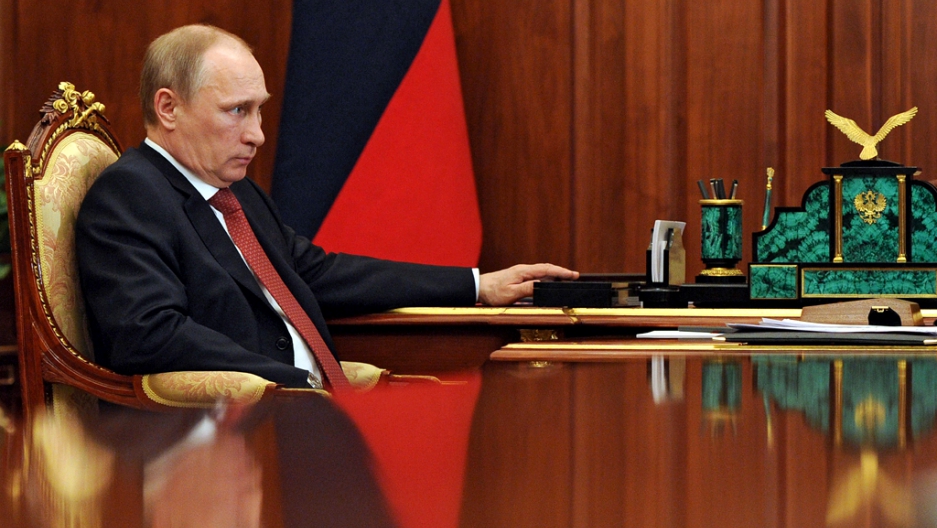 Russia's President Vladimir Putin attends a meeting in the Kremlin in Moscow, on May 5, 2014.
Credit: MIKHAIL KLIMENTYEV
Share

During a speech at a media forum in St. Petersburg, he said Russia would have to "fight for its interests" online.

New laws passed in the last few days show just how serious he was.

If your site receives more than 3,000 visitors daily, congratulations! The Russian government now considers you a media outlet, just like any newspaper, and you will be held accountable for the accuracy of the information you publish.

Putin signed the law into place on Tuesday. Here are the salient details:

Owners of such sites — bloggers, government critics — must submit their personal details to a special register. They will have to verify the information they post, just like a major news outlet would.

One clause especially worries critics: It bans spreading information about people based on their profession or political affiliation with the aim of "besmirching a citizen."

Blogger Andrei Malgin interprets that part of the law to mean "you can't badmouth a political opponent or write something bad about the police," he wrote on Ekho Moskvy's site.

"This law will cut the number of critical voices and opposition voices on the Internet," Galina Arapova, director of the Mass Media Defense Center, told The New York Times. "The whole package seems quite restrictive and might affect harshly those who disseminate critical information about the state, about authorities, about public figures."

Some see the legislation as Russia's attempt to move toward the Chinese model of control over social media. Last September, China's top court ruled that anyone posting "false information that is defamatory or harms the national interest" could receive a prison term of up to three years if his or her post is viewed 5,000 times.

No more cursing, for the sake of the Russian language

Just before Putin signed the new blogger restrictions, he enacted another law that bans swearing in films or entertainment events. We can probably stop holding our breath for a Russian remake of "Pulp Fiction."

The new measure will ensure any film containing "obscene language" would be denied a distribution certificate, meaning it could not be shown in a theater.

The state news agency ITAR-Tass reported that individuals caught swearing could be fined up to $70, while officials could pay up to $40. Businesses would face a heftier fine of $1,400.

The Daily Telegraph pointed out that the law follows one in April 2013 that banned swearing in the media.

"Four colloquial words, including terms for male and female genitalia, as well as a term for a promiscuous female" are believed to be among those on the Kremlin's black list.

What could really be behind the no cursing law? Russian philosopher Vadim Rudnev told The Moscow Times that mat — the Russian name for swearing — is common among Russian intelligentsia, which tends to criticize the authorities.

A pat on the back for "objective coverage" in Crimea

In the midst of news about Russia's latest laws, Putin signed a decree honoring 300 journalists for their "objective coverage" of recent events in Crimea.

Decree 279, which honored outlets loyal to Putin, remained unexplained, Reuters reported, until a Russian newspaper tracked down its contents.

The unrest in eastern Ukraine and earlier Crimea was plagued with misinformation and propaganda, with pro-Russian separatists taking over Ukrainian TV channels and detaining — and in some cases outright kidnapping — Western journalists.

The Russian outlets fortunate enough to get Putin's pat on the back? According to the Moscow Times, they included All-Russia State Television and Radio Broadcasting Company, state-run Channel One television, NTV television (owned by Gazprom), state-funded Russia Today and tabloid Life News.

Outlets such Ekho Moskvy and Dozhd TV, frequent critics of the Kremlin's policies, were left off the list.

Independent media analyst Vasily Gatov told the Moscow Times that such awards were an informal signal. "If someone does not receive such an award, this could be interpreted as a sign of disgrace."