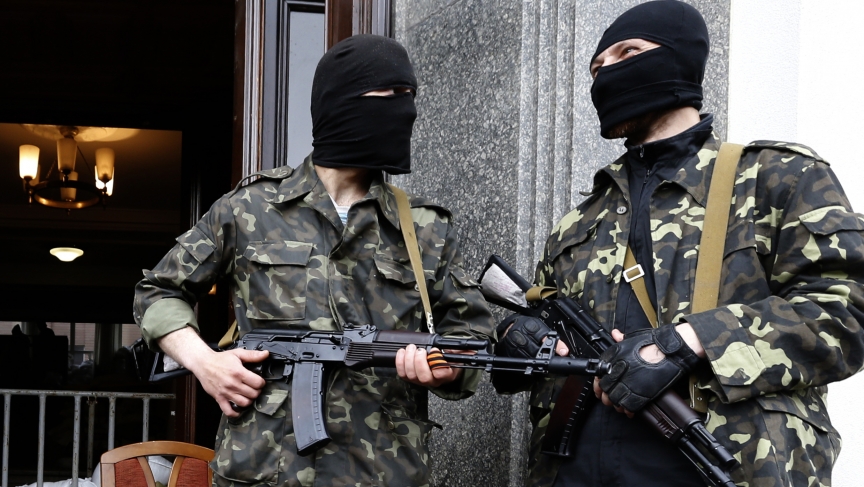 Pro-Russian armed men stand at the entrance to the regional government headquarters in Luhansk, eastern Ukraine, April 30, 2014. New Western sanctions on Russia have sought to turn back the revolt.

As tensions in Ukraine continue to escalate, the White House says US sanctions have had a "significant impact" on the Russian economy. But the real effect on President Vladimir Putin's strategy has been hard to see.

However, one person who has likely seen a boom in business from the latest round of sanctions is British lawyer and barrister Maya Lester.

Lester defends the very people targeted by international sanctions. Most recently she's been getting calls from Russians who have been sanctioned over the Ukraine crises. But she's made a successful career helping Iranian, Syrian, Egyptian and Burmese clients get off targeted blacklists over the past two decades.

Lester says she fights for her clients and doesn't spend a whole lot of time worrying about who they are. Often, she says her clients aren't bad guys — and that it's her job to help clear their names.

"Sometimes we're not in the business of saying, 'This is a wonderful person and he shouldn't be listed,' although very often that is the case," she says. "It's usually a question of saying that what has been put forward by European decision makers is either incorrect or it's insufficient to justify including someone on the list."

Lester says in most cases, sanctioning countries feel it's not appropriate for courts to interfere in international political decisions. She does, however, have some legal recourse.

"The court will be less interested in the question of, 'Should we have sanctions against Iran, Zimbabwe or Russia?'" she says. "The question they are interested in is, 'Has due process been afforded to this particular individual?' That usually comes down to if the person has put in evidence that what has been said about them to justify their listing is wrong."

Lester says in many cases, courts will consider additional evidence and determine if the reasons given for blacklisting someone are clear and comprehensible. The process, however, can be incredibly nuanced.

"People talk about international sanctions, but usually the decision makers that impose sanctions are either the US or the European Union or sometimes the United Nations," she says. "The particular process that's followed, and the way in which it's possible to challenge sanctioning, really depends which of these regimes we are talking about. But each of them has their own rules of due process."

There's no advance noticed when an individual is blacklisted.

"The purpose of these asset freezing measures is to freeze your assets — if you're told in advance that you might be listed, there is a risk that, of course, you will dissipate your assets," she says.

While individuals are typically told after they're blacklisted, that hasn't always been the case. Lester says after 9/11, the United Nations placed a number of people on its al-Qaeda/Taliban blacklist at the request of the United States. But the UN didn't notify the individuals, nor explain why they had been listed.

"Now what happens in the European Union, and I think in the US, [is] you are informed either by a letter or by some kind of public notice that you have been added to the list, and you should be told why," she says. "The questions that the courts have been struggling with, particularly in the European Union, is what kind of reasoning is sufficient, how detailed do they have to be, and do they have to be supported by evidence."

When it comes to business enterprises, there has been limited blacklisting of companies, but these entities can still grapple with challenges that come as a result of sanctions.

"The difficultly comes with dealing with companies where people who are on the list have a large interest in the company," says Lester. "The EU can add either a bank or a company to the list, and if they do that then that company is under the same restrictions for people. But there is also now a great danger of dealing with companies where they haven't themselves been listed, but say there is an oligarch on the list that has a great degree of ownership or control of the company, then again they need to do their due diligence and find out whether a Russian company that they are dealing with is owned or controlled by someone on the list."

Lester says it's common for blacklisted countries to find other ways to preserve trade by finding alternative avenues.

"I have heard that China is a beneficiary of some of the sanctions that the European Union has imposed. A country subject to sanctions will say, 'Fine, we can't easily do business with the EU, we'll do business with the Far East instead.' I think it's less a question of particular banking or tax havens, and more the flows of trade that will naturally be effected by sanctions," she adds.