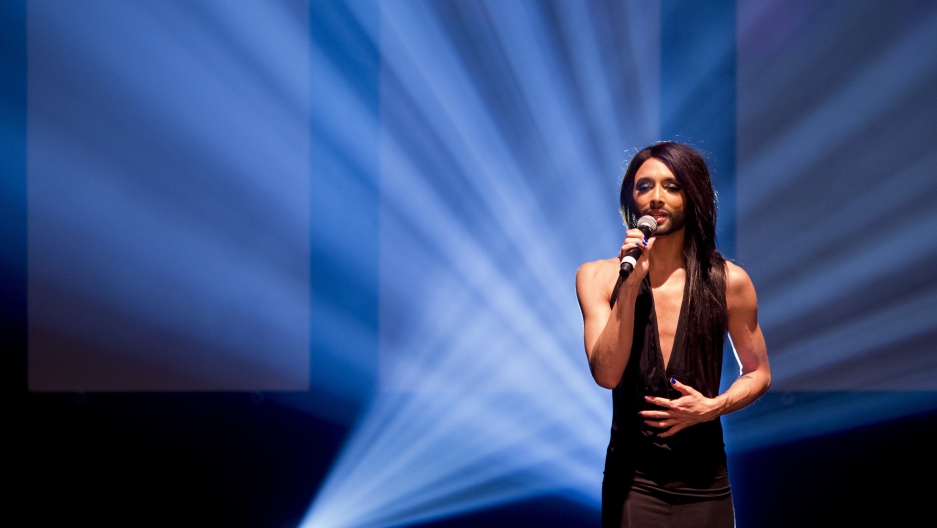 Conchita Wurst of Austria performs during Eurovision in Concert, an event prior to the Eurovision Song Contest, in The Melkweg in Amsterdam on April 5, 2014.
Credit: Sander Koning
Share

LONDON, UK — It’s campy, corny and frequently corrupted by offstage politics. It has its own strange definitions of Europe (Israel?) and music.

But whether you love to hate it — or hate to admit that you love it — there’s no denying the enduring power of the Eurovision Song Contest, the Europe-wide talent show that returns Saturday. Now in its 58th year, the contest has seen more than half a century of sequins, scandal and singing grandmas.

Here’s what you need to know before Saturday’s show in Copenhagen.

Her song, “Rise Like a Phoenix,” documents her journey from closeted boy in a rural Austrian mountain village to glamazon who bathes in rose petals . . .

Happy and proud what a great Day!!! #esc14 #ConchitaWurst pic.twitter.com/Xdvb2X5w3w

If this is the official Twitter page of mr George.. I'm close to a nervous breakdown @BoyGeorge pic.twitter.com/qksVbaR8ek

2. Not everyone is cool with Conchita.

Conchita Wurst performs during an event prior to Eurovision on April 5, 2014. (Sander Koning/AFP/Getty Images)

Petitions have circulated in Belarus, Armenia and Russia to remove Wurst from the show or edit her performance from the final broadcast. Don’t worry, it’s not happening.

Aram Mp3 of Armenia performs during an event prior to Eurovision on April 5, 2014. (Sander Koning/AFP/Getty Images)

In remarks that may or may not have translated well from the original Armenian, singer and former comedian Aram MP3 said Wurst’s lifestyle was “not natural,” and that he would “help her to eventually decide whether she is a woman or man.”

Added Mr. MP3: “When I pass through Kom Aygi (a gay district in Armenia’s capital Yerevan) I speed up my car.”

Leaving aside the strategic wisdom of alienating the Eurovision gay vote, we totally get what Aram MP3 is talking about. You know how when you’re driving alone in your car, veins pumping with righteous, unambiguous heterosexuality, and you become so repulsed by the thought of people enjoying themselves in the gay part of town that you have no choice but to drive right to it and then speed away, as if propelled in opposing directions by desires you can’t express aloud? No? Oh.

"The beard is a statement to say that you can achieve anything, no matter who you are or how you look,” Wurst said in response to Aram MP3. “If you have problems understanding that, then I would be happy to sit down with you and explain it to you in more detail.” Go girl!

The pair hugged when they finally met in Copenhagen this week. Aram MP3 had already issued an apology, saying that his remarks were a joke gone wrong.

“Respect for others IS my guiding principle. We live in one world and we are not alone!” he tweeted with a photo of himself and Wurst.

Respect for others IS my guiding principle. We live in one world and we are not alone! @ConchitaWurst @ESCinConcert pic.twitter.com/OZKB0slo1c

Fans arrive for the second semi-finals of Eurovision on May 12, 2011 in Duesseldorf, Germany. (Sean Gallup/Getty Images)

The Organisation Generale des Amateurs de l'Eurovision (OGAE) is the world’s largest Eurovision fan club, with branches in over 40 countries. They have an annual convention, which we want to attend desperately.

The same Russian politician who drafted that country’s anti-gay laws and complained about Lady Gaga and Madonna’s appeal for gay rights at Russian concerts has criticized Eurovision, calling it a “Europe-wide gay parade” among other, less-polite names.

Protesting gay people at Eurovision is like going into a sports bar on Super Bowl Sunday and asking them to switch the set to “Mike and Molly,” or complaining that Santa’s Village is “too Christmassy.” Cede your ground here, homophobes. This battle was lost long ago.

(Also, for a guy who claims not to be comfortable with the gays, Vitaly Milonov sure follows pop divas pretty closely.)

Then again, maybe Milonov is still fuming over the contest’s slights to Mother Russia.

When Russian act t.A.T.u. lost in 2003 (remember them? The girls who used to make out with each other?), state-owned television channel Russian One launched an official protest.

Last year, Russia bumped a voting snafu to the ministerial level after Azerbaijan failed to award their singer 10 points she’d earned as the country’s second-place vote.

“We will coordinate our joint efforts to make sure this outrageous action does not go unanswered,” said Foreign Minister Sergei Lavrov at a press conference, with his Azeri counterpart Elmar Mammadyarov sitting stonily by his side.

9. Eurovision predicted the tensions between Russia and Ukraine.

A guy whose job it is to track things like this crunched the numbers and found that Russia and Ukraine’s votes for each other have been steadily declining since 2003.

We think the UN needs to hire this person immediately, or at least open its own office of Eurovision Analysis. What other geopolitical conflicts do the votes portend? If nothing else, we could at least get on top of the glampire invasion foretold by last year’s Romanian entry.

10. Russia may be upset this year too. A Eurovision spokesman says votes from Crimea will count as Ukrainian.

A young boy paints a symbolic map of Ukraine in front of the Parliament in Kyiv on April 30, 2014. (Sergei Supinsky/AFP/Getty Images)

11. Ukraine’s Eurovision contestants are not afraid to get political.

The 2004 contest winner Ruslana Lyzhychko sang the Ukrainian national anthem every night in the Maidan. Ruslana — her professional name — also briefly served as an MP in Viktor Yushchenko's Our Ukraine party (not to be confused with recently ousted President Viktor Yanukovych).

Ukraine is responsible for one of the most legendary Eurovision performances of all time. Verka Serduchka took the stage in 2007 dressed in sunglasses and irridescent tin foil, like the love child of R2D2 and Elton John.

He sang for three minutes in his own made-up language as if he were a beautiful alien sent here to teach us about love and Auto-Tune. Serbia won with some forgettable pop song; needless to say, it was a robbery.

Serduchka — real name Andriy Mykhailovych Danylko — is a comedian and performance artist. Guess who didn’t get the joke? Russia banned Serduchka for a year after the show.

13. Okay, Russia. If you don’t like bearded Austrian ladies or glam aliens, who is your ideal Eurovision contestant?

These Russian grannies were the surprise hit of the 2012 contest. We defy you to watch Buranovskiye Babushki (the Grandmothers from Buranova) for more than two minutes without tapping your feet and craving some knish.

14. In the world of Eurovision, language is fungible.

Competitors were required to sing in their own language when the contest began in 1956. That’s since changed, and artists now regularly sing in languages beside their native ones. This sometimes results in a hybrid (intentional or not) of actual words and nonsense ones.

15. Riverdance was first unleashed upon an unsuspecting public at the 1994 final in Dublin.

The straight-backed dancers are among several pop culture icons that debuted to the world at Eurovision — Abba, Celine Dion, tear-away skirts.

16. Not all of Ireland’s Eurovision offerings have caught on in the same way.

Like, say, the talking puppet turkey it entered in 2008. Watch if you don’t believe us.

17. This could be the year the UK doesn’t totally embarrass itself.

Molly of UK performs during an event prior to Eurovision on April 5, 2014. (Sander Koning/AFP/Getty Images)

This year, the country is sending the mononymous Molly, a 27-year-old singer-songwriter who earned the spot in a BBC contest. Let’s hope some fresh-faced talent brings the UK back to the glory days of Bucks Fizz.

18. An independent Scotland in the EU? Maybe. At Eurovision? Definitely.

The official white paper outlining Scotland’s independence plan specifically states that the newly independent nation will forevermore field its own Eurovision contestant if the referendum passes in September. Take that, Humperdinck!

19. This is how excited some Icelanders get when they find out they’re going to Eurovision.

Icelandic act Pollapönk brought a GoPro camera on stage and recorded the moment they found out they’d won their country’s nomination.

We are happy for Pollapönk, but are more intrigued by the guy in the orange track suit calmly drinking his coffee onstage. What’s the deal with Icelandic award shows? And what’s in that cup?

20. And this is how upset some get when they lose. 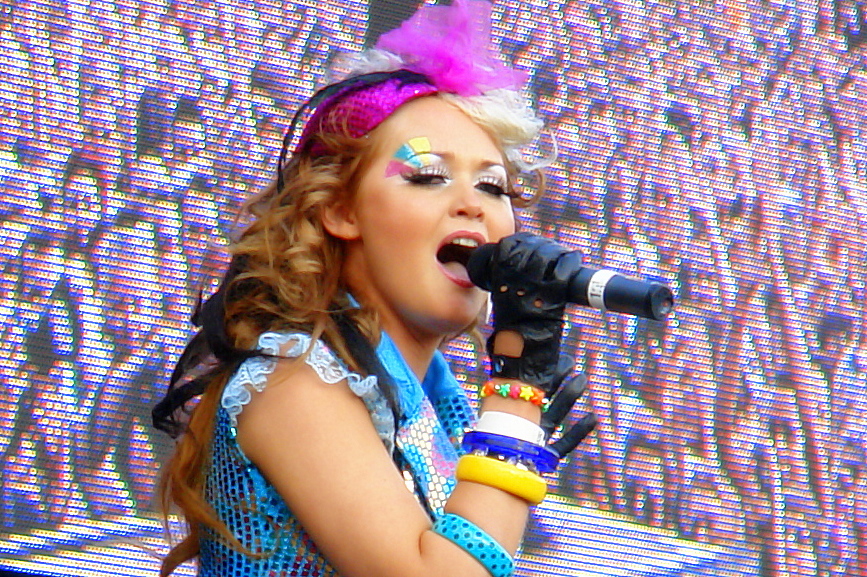 When Iceland’s Silvia Night lost in 2006, she told reporters the public didn’t like her because she wasn't "a slut from Holland." She later threatened to jump off a bridge.

21. There is a Eurovision contestant for you, and this quiz will help you find it.

Pollapönk representing Iceland at Eurovision on May 4, 2014 in Copenhagen. (Betina Garcia/AFP/Getty Images)

The contest’s official website offers this quiz, which will match you to the singer who best suits your pop music style.

GlobalPost took it and learned that our spirit singer is either Denmark’s Basim or Macedonian singer Tijana Dapčević. Then we looked on Twitter and saw that Dapčević took the test and got herself too. This thing is pretty much forensics-level accurate.

22. No matter how bad a day you’re having, you’re still a step ahead of Piero and the Music Stars.

The audible smack when Piero accidentally hits himself in the face with the microphone is not even the musical low point of this 2004 Swiss disaster. By the end of the atonal aerobics-class-gone-wrong, everyone sounds as breathless as if they’d been running a marathon — or, more accurately, running a marathon while singing a terrible song.

Piero and his Stars earned not a single point, and it is regularly ranked as the worst Eurovision performance of all time.

History should not forget the yellow-shirted backup dancer’s effort to save this performance, though. It’s heroic.