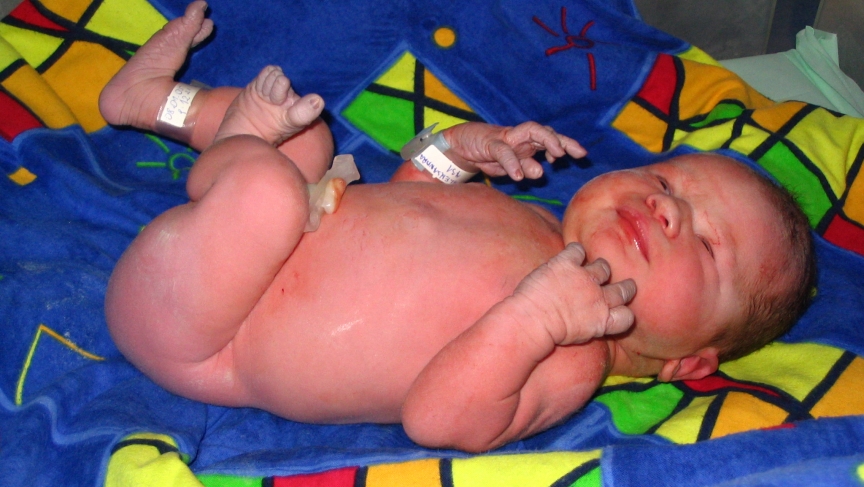 A newborn baby rests on a blanket just a few hours after being born.

A study from the Centers for Disease Control and Prevention shows a small but growing number of American women are giving birth outside of hospitals.

According to a report released in March, 1.36 percent of babies were born outside hospitals in 2012, up from .87 percent in 2004. About two-thirds of those out-of-hospital births take place at home, 29 percent in birthing centers, and five percent in other locations — like a clinic or doctor’s office (or taxi cab, perhaps).

Oregon has one of the highest rates of out-of-hospital births in the country.  It ranks third behind Alaska and Montana. The study found that 3.8 percent of Oregon babies are born outside of a hospital setting.

“In the mid-2000’s, there was a bit of a surge in childbirth activism,” said Boston University Community Health Sciences professor Eugene Declercq, one of the CDC study’s co-authors.

“Women are asking questions about the way birth is conducted in the hospital, and a small proportion of them have started to say that they’d rather give birth outside the hospital,” Declercq told “Think Out Loud” host Dave Miller.

Declercq said there’s no single reason for the trend, though he said the rise in out-of-hospital births coincided with an increase in the rate of hospital Caesarian births. He said parents who feel strongly about natural childbirth are among the most likely to seek out a non-hospital setting.

That describes Cathy Newman, who gave birth to one of her two children at her Portland home. “Just being at home, being able to fall asleep with my child right after the birth, have family and friends, the smells and the experience of my own home, it was fantastic,” Newman said.

Newman, who was among the callers who called into a “Think Out Loud” discussion, said her home birth sharply contrasted with the experience of giving birth to her other child at a hospital.

“It wasn’t horrible, but it certainly wasn’t what we had planned,” Newman said of the hospital birth. “They had their protocol and they wanted to take her away from us immediately when she was born and give her a bath. It just wasn’t that close, intimate experience that we thought we would have.”

More than 100 people wrote “Think Out Loud” to share their birthing experiences and pictures of their newborns. Most women who’d given birth at home described a peaceful and satisfying experience, but Naomi Ulsted of Portland told a different story. She experienced life threatening complications during her home birth, necessitating a rushed trip to the hospital.

“The doctor that saw me in the hospital was very clear that the midwives should have brought me in earlier,” Ulsted said.  “I count myself very fortunate that I am alive today.”

Ulsted also found the process of giving birth at home to be more traumatic than comforting.

“Later on, when I came back, we had blood stains all over. It was kind of like a crime scene, and it wasn’t very restful when I came back and wanted to relax and heal with my baby,” she said.

Declercq concedes there’s a trade-off for mothers who decide to eschew the hospital.

“There are different risks in different places,” he said, though he added there’s little data that can definitively show whether out-of-hospital births are less safe. “Essentially the difficulty is we can’t resolve this question with research. The best research you could do is a randomized trial and we’re not going to start doing that with people around home births.”

Declercq said birthing centers, which are becoming increasingly popular in many states, represent a “middle ground” between home births and hospitals. The centers are typically run by midwives, but in conjunction with hospitals, and they generally have procedures in place to quickly transfer patients to hospitals if something goes awry with the mother or baby.

Meanwhile, Declercq and other health advocates say doctors and hospitals should address the rising Cesarean birth rate. Almost a third of U.S. births take place in operating rooms, which not only may scare some expectant mothers away from the hospital, but also — like any surgery — presents the risk of complications.

Dr. Aaron Caughey heads the Obstetrics and Gynecology Department at Oregon Health and Science University and was part of a national panel that issued new medical recommendations for Cesarean births. On “Think Out Loud,” he explained that new guidelines allow labor to progress longer before shifting from a vaginal birth to a C-section.

“What you see consistently is language about being patient,” Caughey said.

He noted there’s no evidence that the increase in Cesareans has resulted in healthier babies or better childbirth outcomes. Instead, he attributed the popularity of C-sections mainly to legal pressure on doctors. He said states that limit malpractice damages have lower rates of Cesarean deliveries.

“We have incredibly low tolerance in this country for bad outcomes,” Caughey said. “And indeed there are things that can happen during labor that lead to bad outcomes, and so if we make the labor disappear by doing C-sections, you might see a small drop.”

But Caughey said that line of thought is misguided, because it fails to take into account the medical effect of Cesareans on mothers. He said C-sections leave them at risk for complications not only with the current delivery, but for any future pregnancies.

“We open their abdomens, we open their uteruses,” Caughey said. “This is a real surgery.”

This story is based on an interview on Oregon Public Broadcasting's daily news-talk show, "Think Out Loud."