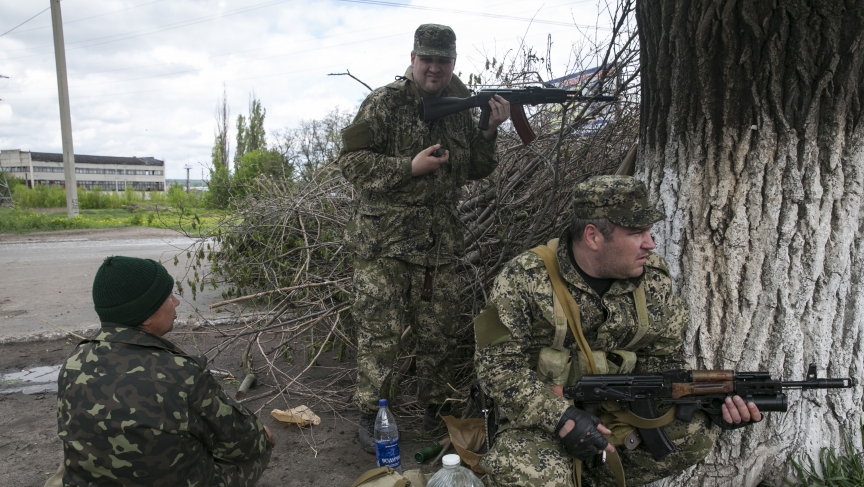 Pro-Russian armed men take positions near the town of Slaviansk, eastern Ukraine, May 5, 2014. Pro-Russian separatists ambushed Ukrainian forces on Monday, triggering heavy fighting on the outskirts of the rebel stronghold of Slaviansk, Interior Minister Arsen Avakov was quoted as saying.

Sometimes wars start, and you know precisely the minute when they began. And then, there's Ukraine.

On Friday, more than 40 people were killed in the Black Sea port city of Odessa and, over the weekend, a mob attacked the police station there and released more than 60 protesters who had been detained because of the violence.

For anyone who's familiar with the beautiful city of Odessa, knowing that violence has struck there makes the fear of actual war greater.

So is this war?

“The news out of Slaviansk today is heavy fighting, helicopters, rockets, shooting, scores of people killed, we don’t exactly how many,” said former US ambassador to Russia Michael McFaul. “I guess we could continue to call it an anti-terrorist operation, but it feels like a military conflict to me.”

And Ambassador McFaul fears the conflict will escalate into an interstate war.

"Putin has been very clear that if he thinks ethnic Russians are being threatened in Ukraine, he feel he has the right to intervene," said McFaul, "I think [his restraint] is striking so far,  but I'm also very nervous about how this could escalate very quickly."

The escalation he's nervous about is seeing “30,000 Russian troops coming over the border in the name of protecting ethnic Russians ... to invade Ukraine,” said McFaul.

The White House has threatened further sanctions against Russia if Ukrainian presidential elections are disrupted. But McFaul said those elections, scheduled for May 25, are a long way off.

“Given what’s gone on in the last 24 hours, one has to wonder if there might not have to be a response before May 25."