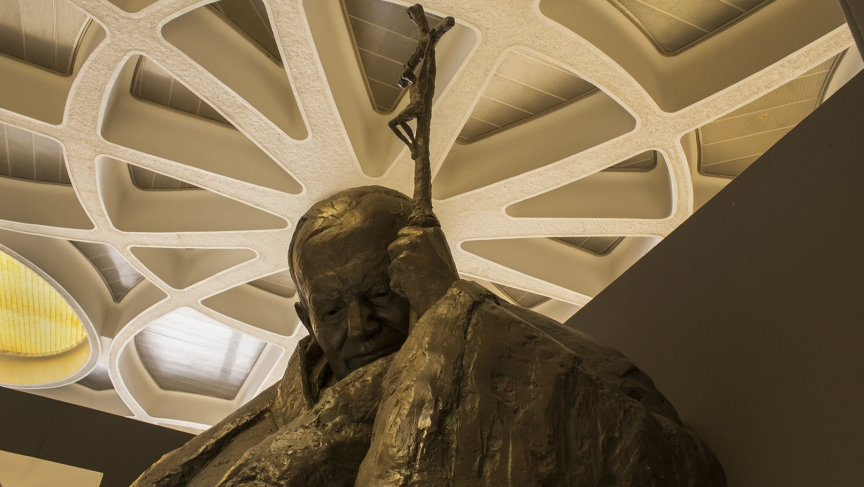 There are about a thousand saints in the Catholic Church. A little over a week ago, two more were added to the list.

The two were perhaps the most popular popes of the 20th century — John XXIII and John Paul II.

It was a huge media event that made us wonder: how do they earn their halos?

“Saint-making is back in a big way as a popular exercise in the Catholic Church,” says John Allen. He’s been a Vatican reporter for two decades.

He says Pope John Paul II reached sainthood in record time, in part thanks to changes he initiated. As Pope, he was a prolific saint-maker who simplified the rules of holiness.

“He wanted to make the point that holiness is not unattainable, nor is it a historical artifact of the early centuries of the church,” Allen says. “But it’s actually possible in the here and now. So, of course, he was the pope that not only beatified and canonized more than any previous pope, but more than all previous popes combined.”

Magallanes was a Mexican priest. In 1927, in the middle of a civil war, the government demanded that he spy on other priests. He refused and paid with his life. He’s been venerated as a martyr ever since.

In Mexico, public fiestas are thrown in his honor. My extended family in LA has prayed to him for generations. My dad’s brother composed a song to celebrate his canonization.

It took about 90 years before my great granduncle was canonized. His case was quick.

Inside the central library of the Jesuit headquarters in Rome, shelves are filled with volumes of sainthood cases dating back to the 16th century.

“We have been doing this work for the past 450 years, since many causes take many centuries, we have to keep a lot of material,” says Father Marc Lindeijer. The Dutch priest is a kind of saint lawyer, or what the Vatican calls, a postulator. He collects evidence to prove that his “clients” have the stuff of saints.

Like any case in court, a "cause" for sainthood is complicated, expensive, and requires a lot of paperwork. The postulator must hunt for official writings, private letters, and even personal diaries of a saint candidate.

“To do the process and do it well takes you at least ten years,” Father Marc says.

Then he has to produce a summary, which could take another four, five, six, or even seven years.

Only then, do you get a shot at the Congregation for the Causes of Saints, kind of like “saint court.”

“Then you have to put yourself in line in the congregation,” he says. “Currently there are some 5000 causes ... to be approved. And if there is no exceptional pressure, waiting ten to fifteen years is nothing.”

If you’re picturing a boring, pious sort of investigation, you’re wrong. A cause for sainthood often dips into the supernatural. Because for a saint to become a saint, you also need miracles.

Usually, in Catholic tradition, these are episodes of inexplicable healings.

Like the mysterious case of Floribeth Mora, a humble Costa Rican woman who claims that praying to Pope John Paul II cured her of a hopeless brain aneurism. During a press conference in Rome, Mora gave her testimony. It was the missing link in the pope’s cause for sainthood.

“Many say that I’m crazy, they think that I’m crazy. And I say, this insanity is a blessing, because this crazy woman is cured, and that’s what matters,” Mora says.

Father Marc Lindeijer says he understands that people might be skeptical of this particular part of sainthood.

“The people that have to evaluate the miracle in the congregation, they are always, first, medical doctors, and they are very, very critical. If there is even a doubt about it being a miracle, they will just say 'no,'” he says.

So, these doctors believe in miracles?

“The only thing we ask from a doctor is that he says that it is inexplicable. We do not ask him to pronounce himself on whether god exists and whether this is a miracle or not,” Father Marc explains.

So, to become a saint, you’ve got to have a following, maybe be martyred for the cause of Catholicism, and perform a couple of miracles. And there’s another ingredient that carries some weight: be a pope.

“Since his funeral, almost 20,000 people have stopped by his tomb every day. This happened for years, and still today, we see so many. This confirms the vivid fame of sanctity that exploded in god’s flock,” Oder says.

And that, says journalist John Allen, is how it should be. Sainthood is, in essence, a very democratic process.

At the end of the day, you walk into the typical Catholic parish around the world and you ask the people who show up to mass on Sunday, yes or no, is John Paul a saint? You are going to get an overwhelming majority that says yes, and that is how sainthood is supposed to work!”