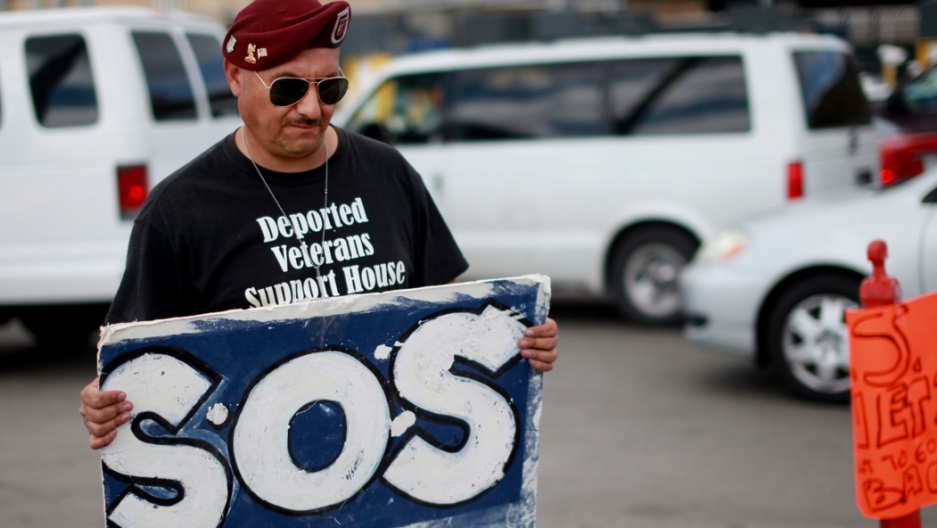 Deported US Army veteran Hector Barajas stands at the US-Mexico border.
Credit: Sandy Huffaker
Share
TIJUANA, Mexico — Decorated Vietnam veteran Hector Barrios died April 21 at his home in Tijuana, Mexico. The next day, a funeral service held in his honor was adorned with the black and yellow insignia of his unit, the famed 1st Cavalry Division. Crisply uniformed veterans folded an American flag into the shape of a tri-corner hat to present to his family.

At most funerals for veterans, the flag is presented “on behalf of a grateful nation.” Not for Barrios. He was deported from the country he fought for, never to return.

Barrios was one of thousands of deported Mexican veterans of the US military who found themselves strangers in a strange land, a Mexico most of them had left at a young age. Because of legal reforms in 1996, legal residents convicted of a number of criminal offenses are deported with no possibility of judicial discretion. There is no exception for those who fought in America’s wars — not even those, like Barrios, who were wounded and awarded decorations.

In Tijuana, disenchanted veterans have come together to form an advocacy organization, Banished Veterans, which is led by Hector Barajas, a veteran of the 82nd Airborne Division.

The group estimates that at least 3,000 — and possibly as many as 30,000 — veterans have been deported. Precise data are hard to come by, however, as the US government does not keep separate statistics of deported veterans.

They account for a small minority of the vast flood of Mexicans deported every year — lately at a rate of about 700 a day.

Barajas also founded the “Deported Veterans Support House,” known as “The Bunker,” where recently deported veterans can stay for up to 30 days while they find other accommodation.

Banished Veterans claims to be in contact with other deported veterans in 19 countries around the world.

Many of those deported to Mexico find it difficult to adjust to life in their native country. Employment prospects are grim and attitudes toward the veterans are often hostile.

“I’ve been in the US all my life that I can remember. All my earliest memories are of the US. I don’t know this country that I’m in now,” said Alex Murillo, a Navy veteran who served from 1996 to 2000.

“It was big time culture shock. I had to re-learn Spanish,” he added. “It’s really, really ugly. There is a lot of bigotry, being called ‘pocho’ or ‘gringo,’ told that you don’t belong here. It’s not nice. We want to be home. We deserve to be home.”

Barajas, who was deported in 2004 after serving a two-year prison sentence for discharging a firearm into a vehicle, echoed the sentiment. “Your whole life is ripped apart,” he said. “In Tijuana there’s a lot of deportees, but I think that when it comes to finding jobs, to doing any sort of paperwork, you’re looked at differently. People will give you a hard time.”

“We volunteered. We put our life on the line. We did what normal Americans don’t do. They’re betraying us,” he added.

To make matters more painful, many of the veterans were forced to leave family members — even children — behind in the US.

“All my family is in the States. All of them. My mother, my father, my sisters, my brothers, my son. Still there,” said Fabian Rebolledo, another veteran of the 82nd Airborne who was deployed to Kosovo in 1999. Rebolledo was deported in 2007 after being convicted of check fraud after attempting to cash a check he was paid for a stucco job.

Many of the veterans stranded in Mexico admit they were convicted of various criminal offenses, but they say that deporting them — in addition to the prison sentences they’ve served — is unnecessary and cruel and amounts to double punishment.

“It’s wrong. I went to prison for what I did,” said Ruben Robles, a Vietnam-era veteran of the US Army who was deported after serving a prison sentence for robbery. “I felt like I got a raw deal. That’s messed up.”

“I went to prison for what I did ... But to deport me, with no benefits? It’s worse than prison.”

“But to deport me, with no benefits? Come on. It’s worse than prison,” he added. “I think they know, it’s not fair. It’s not fair to break up families. I have grandkids I don’t even know.”

At the funeral service for Hector Barrios, deportees and visitors from the US spoke up against the deportation of America’s war veterans.

“I spent part of my military service fighting against a wall in Berlin, which the United States said was a tragedy,” he said. “That’s not near as much a tragedy as the wall that’s here today.”

“I’m just so sorry that we could not honor Hector’s request to get back across that horrible, horrible wall.”

Ernie Aguilar, who, like Barrios, is a veteran of the 1st Cavalry Division, directed his message directly to President Barack Obama and Homeland Security Secretary Jeh Johnson.

“This is a message for President Obama. It’s time to bring our soldiers home. Give them their benefits and don’t let them suffer like this. Second, to the director of homeland security. Who is he? Who is he to do this? We never leave a man behind and I’m not going to start now.”

There are hopes among those stranded in Mexico that immigration reforms will eventually allow them to return to the US.

“In one fell swoop they could just bring these guys back. We could write it off as a bad piece of history and go forward from here,” said Victor Hinojosa, a veteran of a Vietnam-era unit that treated burn victims from the war.

In the meantime, the deportees vow to continue fighting.

“We don’t know how to do anything besides fight. That’s how they trained us. We will never give up. Never,” Alex Murillo said at Barrios’ service.

“Hector will be our rock. With this rock, we’re going to start a ripple, and that will turn to a wave. Something will begin to happen. We know it.”

Ironically, in death Hector Barrios may get the wish he never got in life: no law prevents him from being buried — with military honors — in the US.