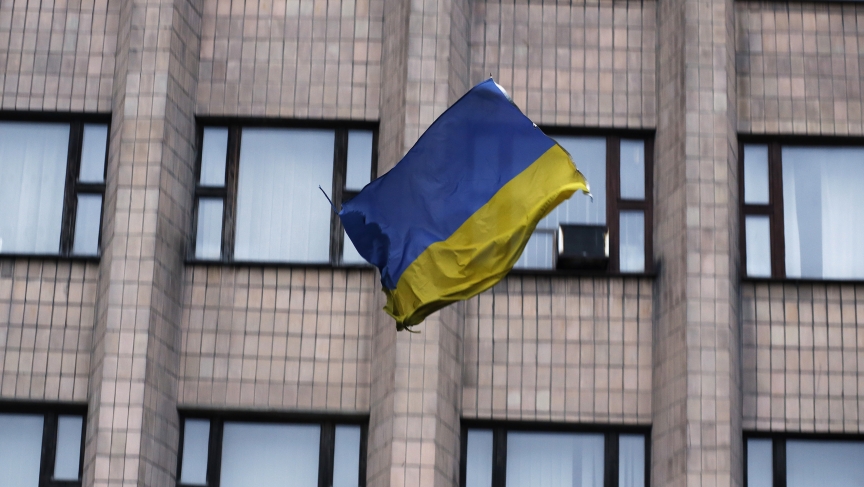 A Ukrainian flag tumbles to the street, after being thrown by pro-Russian protesters from the top of a district council building in Ukraine.

There's a new part of Ukraine in the news now — the port city of Odessa, which is far from the restive areas of eastern Ukraine. Dozens died there on Friday after a building caught fire as pro-Russian militants tried to occupy it.

“It’s a city that’s pretty unique in the post-Soviet space,” says writer Keith Gessen. Gessen visited Odessa at the end of March and was also there in the 1990s.

“It was founded as a kind of free port in the early 19th century,” says Gessen, “which meant there were a lot of people coming in and out of Odessa. There were a lot of Bulgarians, a lot of Greeks. There was a large Jewish population. So it’s always been a large multicultural city, where people — mostly — got along."

But Gessen notes, "there were, of course, in the early 20th century, some pretty serious pogroms against the Jewish population. So it hasn’t always been a paradise.”

Still, Odessa has always been special in the popular imagination. “It’s right on the Black Sea,” adds Gessen. “It’s the biggest port in Ukraine. In Soviet mythology, it was this very colourful place … It was a port city with a musical tradition, like New Orleans." He says it was even mythologized as a gangster city, like Chicago.

So Gessen was shocked on his visit a few weeks ago. “The aggressiveness of both sides surprised me,” he says. “I wasn’t prepared for that.”

Gessen is an American, but he was born in Moscow and moved to the US when he was young. “It’s not automatically obvious to a person who is from Russia that Ukraine is a completely different, and separate, place — a place with its own history and its own destiny.”

He says it required a lot of work on his part to understand what that meant. And he says “a lot of people in Russia have not done the work of accepting that Ukraine is a separate place. It leaves a bad taste in the mouth.”

Gessen writes about some of these issues in a "Letter from Ukraine" published in the latest edition of the New Yorker and titled Waiting for War.