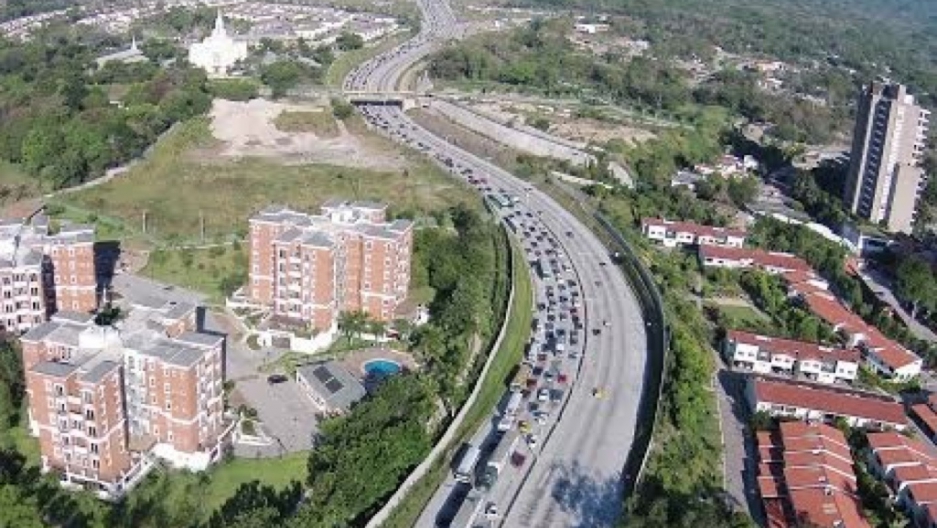 SAN SALVADOR, El Salvador — At night on the western edge of this capital city, Borman Marmol looked like a middle-aged toy helicopter aficionado.

He leaned against his parked car, oversize remote control in hand, eyes to the sky. A deadly accident had cars backed up 25 miles on this part of the highway, and Marmol had a camera on the entire snaking traffic jam.

Onlookers paused and gaped at the buzzing aircraft, with its flashing green and red lights. Most seemed to recognize it as the newspaper’s drone, at first marveling at the tool, then laughing as it flitted noisily over cars.

“The New York Times can’t do what they’re doing,” said professor Matthew Waite of the Drone Journalism Lab at the University of Nebraska-Lincoln. “At least not without any serious legal hassle.”

That’s because the United States bans using drone for news and other commercial ends. The Federal Aviation Administration (FAA) is reviewing ethical concerns, but reforms allowing journalists to use the technology likely wouldn’t take effect for two years.

No such worries here in El Salvador. This is one of a growing roster of Latin American nations, including Brazil, Mexico and Peru, where news outlets are deploying the aircraft in reporting.

Vladimir Lara, chief of photography at El Salvador’s La Prensa Grafica, said pictures taken from the sky garner up to 70 percent more views than traditional photographs on the newspaper’s website.

More from GlobalPost: Here are some cool things we could use drones for instead of killing and spying

In El Salvador, a developing nation of 6 million, the lack of UAV regulation is creating an experimental airspace.

“There’s been an increase in demand here,” Lara said. “I know a few people have bought them to observe their farms.”

But these robot planes aren’t just for monitoring crops and traffic. The Salvadoran government uses much larger, pricier drones purchased from Israel to observe and combat narco trafficking.

La Prensa Grafica uses much more basic Phantom 2 Vision Quadcopters with built-in cameras from Chinese company DJI. Each cost less than $1,500 for all necessary equipment. By comparison, renting a helicopter would cost $500 an hour, according to Lara.

Should we be worried?

News drones call for ethical discussion, “before we have flying robots with cameras as a commonplace thing,” Waite said.

Photojournalists are well within legal boundaries when snapping photos of passersby in a public space. But swooping the camera from high above? Paparazzi have already used the new tech to invade privacy, catching topless shots of Kate Middleton on vacation.

Alejandro Sanchez, a researcher at the Council on Hemispheric Affairs in Washington, DC, studies drone use in Latin America. He shook off any worry that drones with “predator capabilities” would soon be crowding Latin American airspace.

“With that said, even one drone with a video camera can do much damage to a person’s right to privacy,” Sanchez said.

Here in El Salvador, such concerns are understandable. The country remains sharply partisan two short decades after a 12-year civil war. In theory, a biased news organization could use a camera-mounted quadcopter to invade the privacy of a political opponent.

“Most countries, most cities have laws to cover people from [privacy invasion],” he said. “There’s nothing about a drone that makes that OK.”

Waite argued stalking someone is hard to do on short battery life. “This thing can fly for maybe 12 minutes before you have to bring it down,” he said.

Or before they crash. Earlier this year, one of El Salvador's news quadcopters hit telephone wires over a polling place, falling to the ground and narrowly missing bystanders below. Although less dangerous than a crashing helicopter, a four-propeller camera falling out of the sky is enough to cause damage.

“Safety of people on the ground is by far the most significant issue that journalists or anyone who flies these things will face,” Waite said.

As hundreds of Salvadorans gathered outside El Calvario Catholic Church on Good Friday, two Prensa Grafica reporters pondered how to get their toyish camera drone into the air. They huddled over a remote control, a cellphone clipped on as viewfinder and wifi connection. One reporter held the aircraft over his head until the other revved the propellers skyward with the remote control, navigating the Catholic faithful on the ground and cables overhead.

Not long after, a second drone joined, doubling the aerial coverage and the hornet-like sound over the Holy Week procession. The scene suggested a not-so-distant future when UAVs compete for aerial photo space like photographers jockeying for the best angle.

In practice, most quadcopter pictures and video published in Salvadoran media are mundane — big crowds, traffic, the occasional sunset on the beach. Here the tool has been used primarily to add a birds-eye perspective to reporting.

The rapid growth of camera drones in Latin America may prove more significant for media than private individuals, particularly if regulations start popping up to ground aerial journalism.

“There are a number of countries in Central and Latin America that don’t exactly have the greatest record on press freedom,” Waite noted.

At least for now in El Salvador, photographers have the option to take pictures of traffic jams from above.