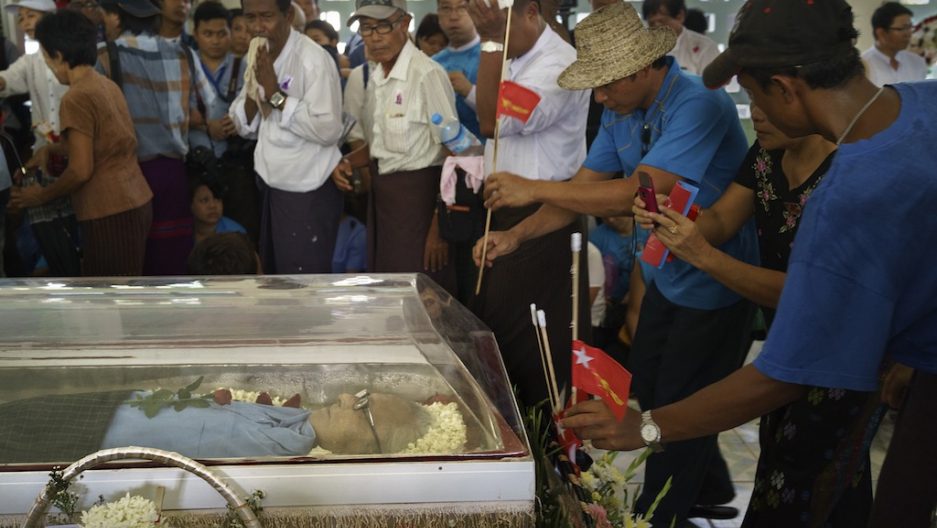 CHICAGO — The touching funeral in Rangoon for Win Tin, the intrepid journalist who spent 19 years in prison for refusing to kowtow to his military captors, revealed the quiet undertow in Myanmar/Burma. The threat to a free press is real.

As up to 100,000 people, including senior dissidents, international dignitaries, and ordinary citizens passed the cortege or stood vigil at headquarters of the NLD, the opposition party Win Tin helped found, two ominous realities filled the air: since December, five journalists had been arrested; and in March, Parliament passed a law authorizing the Ministry of Information to ban reporting it believes could “incite unrest,” “insult religion” or “violate the Constitution.”

These actions confirmed what Win Tin shared with me in an interview last March: freedom is not something that can be metered out in controlled bits by a reluctantly retreating military.

The most important thing Western democracies can do to support the Burmese people is help foster the growth of a free local press. Despite widespread giddiness about Myanmar’s recent liberalization, the international community is ignoring deeply worrisome conflicts because few journalists are covering them – and coverage from international news outlets only goes so far.

Last Saturday, journalists assembled in Rangoon to plan a campaign to protect journalists and expand media freedom. Tow Zaw Latt, bureau chief of Democratic Voice of Burma (DVB), is one of the organizers. “If we don’t take any action the government will continue to pressure journalists,” he told the Irrawaddy, founded in 1993 by Burmese journalists living in exile in Thailand with a mission of covering Burma/Myanmar and Southeast Asia.

There is no shortage of living local heroes. During the 1988-2010 military reign, anyone who spoke critically of their oppressor was either jailed or expelled. For years, brave individuals bolstered one another in prison with dreams of freedom.

They clandestinely passed news to journalists in exile—most notably staff of The Irrawaddy in Thailand, Mizzima in India, and DVB in Norway. In addition to disseminating information, these journalists shared a passion--to nurture a mature news organization they could transplant to a freed Burma.

Beginning in 2012, as the reformist government released jailed journalists and allowed those who had fled to return on temporary visas, the moment seemed at hand. Irrawaddy, Mizzima and DVB opened temporary offices in Rangoon, and existing papers began to think about becoming dailies.

I saw the result in person. I was in Burma last March interviewing journalists, academics, and activists when ethnic/religious violence broke out in the small city of Meikhtila, leaving 43 dead and 13,000 displaced, most of them Muslims.

The complexity of the press role became apparent. Local photographers and reporters were limited by partisans that resented their objectivity; editors already covering the conflicts on the border states wondered how many stories containing implied criticism of the government they could safely print at one time.

Still, coverage by the international press is not the best long-range option. A strong local press will always be superior at understanding local culture, getting to the heart of a story and building the people’s confidence.

Moreover, the Burmese government remains tentative about foreigners. As we have seen with their recent expulsion of Medecins Sans Frontieres from the Muslim-Buddhist conflict area on the premise that medical staff were “fuelling tensions” and being “detrimental to the rule of law,” it is not extreme to think a testy government, perceiving threat, could expel the foreign press.

Win Tin’s epitaph reads “May you differentiate between what is right and what is wrong, always stand on the right side and fight against what is wrong.” A free press is our best chance of doing that anywhere, but never more so than in Myanmar, now.

Susanne Dumbleton is professor and former dean at DePaul University School for New Learning. A Public Voices Fellow of the OpEd Project, she is writing a book on Aung San Suu Kyi, Helen Prejean, and Wangari Maathai as leaders for social justice.