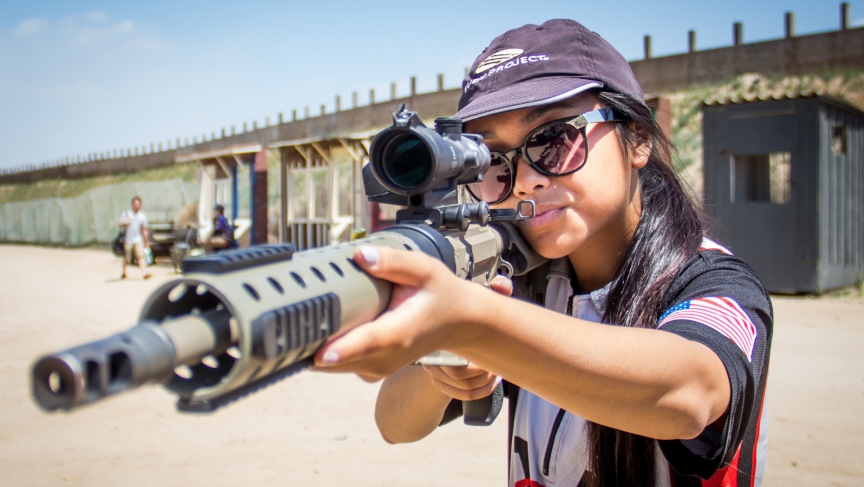 Claudia Vidanes aims a Phantom Strike AR-15, a custom gun designed by her father, Jojo Vidanes, who is the president of the Norco Running Gun Club in California.

At an outdoor shooting range, about 45 miles east of Los Angeles, wind whips dust into the air. A bright sun beats down on necks.

"We — my culture, my heritage, my roots — we do embrace firearms," Urbano says.

Urbano is a member of the Norco Running Gun Club, a predominantly Filipino-American group of more than 500 shooters from all over Southern California.

About 80 have shown up today at the range, housed at Raahauge's Shooting Enterprises in Corona, for a weekly competition that has shooters running through obstacle courses and shooting at paper and metal targets.

In the US, the vast majority of gun owners are white and male. But it's a different picture at the Norco Club where the president is a Filipino immigrant and members banter in Tagalog about technique and gun models.

Urbano, the son of immigrants and an automaker employee, explaines that guns are popular among many Filipino-Americans because they're exposed to them at a young age.

He bought his first gun at age 18. Fourteen years later, his collection has dramatically increased. "I think I have about 10 pistols, about four rifles, and I’ve got two shotguns," Urbano recalls.

Imported from the Philippines

Enjoying guns is nothing unusual to Urbano and his friends. They don’t dwell on the fact that, as Asian Americans, they’re in the minority of gun owners.

It’s the non-Filipinos at the gun club who are struck by the sight of so many Asian shooters.

Chee Kwan’s first visit to the club, at the invitation of a Filipino friend, surprised the Chinese American and former Marine.

"Typically, you don’t see as many Asian people actually go to gun clubs," Kwan says. "But here, it’s the complete opposite."

National data about Asian-American gun ownership is spotty, but there is an indication that Asian Americans are less likely to own guns than other Americans. Many Asian immigrants come from countries that lack a tradition of citizens owning firearms. In fact, China and Japan effectively ban private ownership of guns.

It’s a different story in the Philippines. Gun laws have been tightened recently, but it remains possible for citizens to carry firearms if they can demonstrate, for example, that the nature of their profession puts them in "imminent danger."

Filipinos have a long history with guns, according to Jay Gonzalez, a professor of Filipino studies and public policy at Golden Gate University in San Francisco. Gonzalez cites a machismo culture where fathers teach sons to do what it takes to safeguard their families.

"This cultural tradition of having a gun to protect your family has been passed down generation to generation," Gonzalez says.

Gonzalez says the country's entrenched relationship with the US further shaped Filipino gun culture. Militarily, the countries have been enmeshed since the 19th century — originally fighting each other and later becoming allies.

The US backed the Philippines plan to mandate ROTC training in college through much of the 20th century. "Every male knew how to handle a gun and is introduced into that gun culture, so it’s sort of reinforced," Gonzalez says.

"We grew up watching a lot of movies," says Jojo Vidanes, the international shooting champ who’s also president of the gun club. "It was all about World War II stuff."

He says war movies from that era often featured the .45 pistol that came to be revered by many Filipinos. "Actually, if you ask a lot of Filipino Americans, they’re always going to have a .45," Vidanes says. "For some reason, there is a joke: Filipinos are born with a .45."

Also, as legend has it, the Americans used the .45 to fight Muslim Moros warriors in the country’s south resisting US rule at the turn of the 20th century.

The face of the future

There are multiple shooting ranges within driving distance of the Corona location. But Matthew Clarke, a power grid engineer from Temecula, tries to shoot with the Norco Club a couple times a month.

He enjoys the diversity. "I'm the minority here — the white guy," he laughs, but he says he also wants to shoot with the best. "If you want to become a world champ, this is the best place to come locally."

The club is home to leading shooters, such as Kwan, who was featured on two seasons of the History Channel's competition show, Top Shot. And there are some rising stars, such as Vidanes' 17-year-old daughter Claudia, who has competed nationally, and Jonathan Musngi, who will be one of the junior shooters representing the US at the International Practical Shooting Confederation competition this fall.

Musngi, 17, got interested in shooting because of his dad, who’s from the Philippines. One day his father took him to the Norco shooting club.

"People asked how old am I, and I was 9 when I first came here, and they were like, 'He’s old enough to shoot,'" Musngi says.

He says money’s been tight since his dad got sick a few years back, but members of the club have pitched in for his training and gear.

"Since the start, everyone’s been pushing me and telling me that I have a lot of potential," Musngi says. "That’s why, for me, everyone is family here."