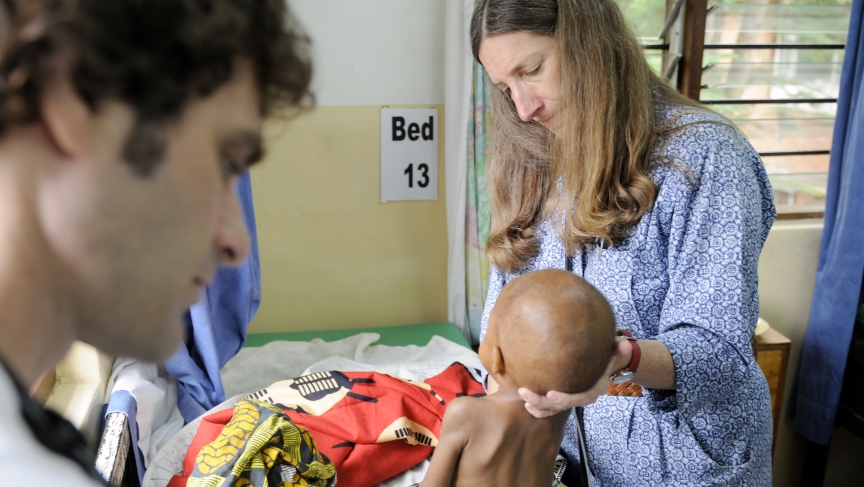 Dr. Terrie Taylor, a medical professor at Michigan State University, has spent much of her life studying malaria in Africa. On a recent morning, Taylor made the rounds in the malaria ward of the Queen Elizabeth Hospital in Blantyre, Malawi.

She moved from bed to bed and stopped to check on a 9-year-old girl who had emerged from a malaria-induced coma. Taylor pressed on the girl’s shoulder, to see if she had regained sensation.

“Whoo-hoo!” Taylor exclaimed as the girl moved her hand to the source of the pressure. “Good job!”

Taylor and her colleagues treat and study patients with the deadliest kind of malaria – cerebral malaria. The disease affects the brain, causing children to lapse into a coma and, in many cases, to die.

Cerebral malaria accounts for the vast majority of malaria deaths each year, which the World Health Organization estimates at 600,000 worldwide. Most of those deaths are of children under the age of five in sub-Saharan Africa.

Doctors have long known that malaria is caused by a parasite that is spread by mosquitoes. But those who study the illness have been perplexed by a fundamental question: How exactly does the disease kill? Taylor said no one has ever been certain.

After two decades of researching malaria, Taylor realized why the cause of death was still unknown – no one had looked at the brains of children with cerebral malaria, at least not in significant numbers. “And that was when we had the idea – this crazy idea – to bring an MRI to Malawi,” Taylor said.

Magnetic resonance imaging machines (MRI’s) are common in American hospitals, but Taylor said when she began her quest to get one, there was not a single such device in Malawi or any surrounding countries. Local hospitals could not afford the machines, and did not have the expertise to run them. Taylor said it took some arm-twisting, but she and a colleague at Michigan State eventually persuaded General Electric to donate a million-dollar MRI to her research project.

When it became operational in 2008, Taylor and her colleagues put children with cerebral malaria into the imager to see what was happening in their brains.

Sam Kampondeni, a radiologist, showed me one of the first pictures they took. It was of a child’s brain, and in it the brain tissue was surrounded by a thin layer of water, which is healthy.

Then he showed me the same brain a day later. It had become hugely swollen, pushing out the layer of water and pressing against the inside of the child’s skull, and down onto the area that regulates breathing. Three hours after that image was taken, the child stopped breathing – and died.

Taylor said this seems to explain how cerebral malaria kills. “We’re pretty confident that the cause of death is these massively swollen brains,” she said.

Taylor has been presenting her findings at conferences around the world for the past year, including a recent meeting on tropical medicine in Washington, DC. Dyann Wirth, a malaria expert at the Harvard School of Public Health, was in attendance.

Wirth said Taylor’s discovery is important because it suggests an alternative way of treating malaria. Rather than focusing on the parasite that causes the disease, doctors could focus on the swelling that results.

“One might be able to reduce the cause of death and the number of deaths by using some kind of ancillary treatment that doesn’t attack the infection but attacks this response of the brain,” Wirth said.

For instance, doctors might give drugs that reduce brain swelling – or perform surgery to relieve pressure in the skull.

Terrie Taylor plans to study these and other potential treatments soon.