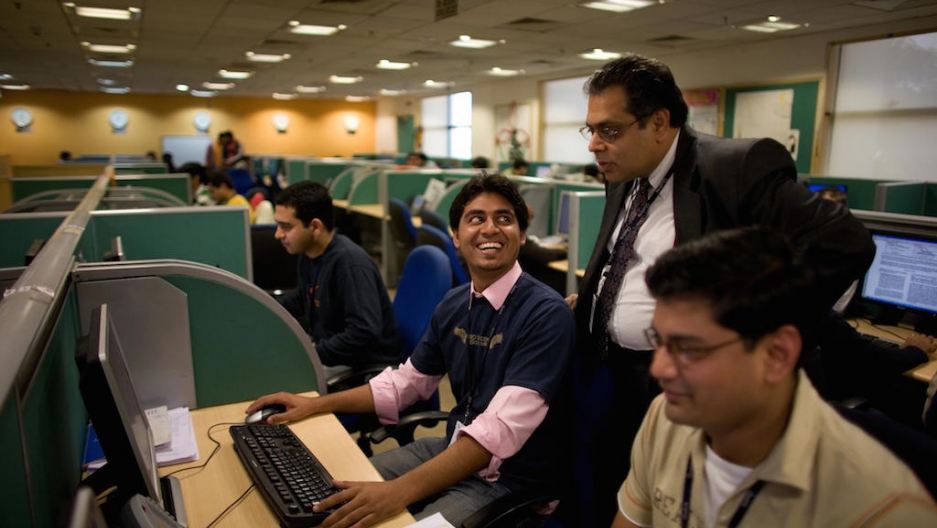 The faces at the other end of tech support.
Credit: Finlay Kember
Share

BANGKOK, Thailand — It’s a call center cliche, familiar to many Americans who’ve picked up phones to contest bogus bank charges or gripe about a laptop on the skids.

The agent who answers goes by a common US name, perhaps Larry or Jennifer. Yet the accent is unmistakably Indian, sometimes hard to comprehend or laced with unfamiliar idioms.

It’s no secret that Indian call centers have an accent problem. That problem is now proving to be incredibly costly. Accents, according to one of the nation’s top trade associations, are largely to blame for India losing 70 percent of its call center industry to the Philippines. Call centers shifting from India to the Philippines will be responsible for $30 billion in lost foreign exchange earnings this decade.

The head of India’s Associated Chambers of Commerce offers a blunt assessment of his nation’s accent-related woes. “Employees in Philippines call centers speak English fluently with a neutral accent, which is what customers look for and that is something missing in Indian accents,” said D.S. Rawat, the group’s general secretary. “That is a prime reason why [call center] business is thriving in that country.”

Of course, a "neutral" accent is in the ear of the beholder. To call centers, that beholder is America, the world’s largest pool of consumers and the nation call centers are incentivized to placate.

India, a former British colony, is second only to the United States when it comes to the volume of English speakers. But the Philippines — a moderately poor former American colony — has a larger base of English-fluent workers who can more easily pull off a California accent or even chitchat about American Idol. For a $500-per-month salary, they have what it takes to sooth grumpy callers irate over cell phone roaming fees.

Americans on the line with one of the Philippines’ rapidly expanding call centers may have no idea they’re connected to a tropical archipelago in Southeast Asia. To the American ear, Filipino speech can sound similar to the Latino accent, a linguistic legacy of three centuries of Spanish rule in the Philippines.

“Accent is a big part of the story,” said Gillian Virata, senior executive director of the IT and Business Process Association of the Philippines, or IBPAP. “We have a ‘neutral’ accent and we don’t speak fast. Some Indians do because their dialect affects the way they speak English.”

The English language proliferated in the Philippines after the US triumphed in the Spanish-American war in 1898 and took the island nation as its spoils. The next five decades of US occupation were characterized by gruesome subjugation but also the rise of a public education system emphasizing English.

The outcome: American cultural fingerprints are still easy to see in the modern Philippines. The nation adores basketball and cheeseburgers. Unlike in India, where a call center agent named Vikram may transform into “Victor” when he comes to work, a Filipino is more likely to have a Christianized name familiar to Americans (such as Mark or Maria) in real life.

Many Filipinos are already primed on American pop culture. But call centers try to fill in the gaps. “When I’ve visited call centers, they might have the TV turned to the Rose Bowl,” Virata said. “We’re not very familiar with American football and they need to know what’s exciting the people they’re speaking with.”

Cultural dissonance with India can someimes disintegrate into abusive tirades. Some Indian firms, in an effort to reverse severe job turnover, have even hired counselors for agents subjected to racist abuse that leaves them in tears, according to a report in The Guardian.

Meanwhile, the Philippines’ edge translates into huge profits. Call center-related industries now account for roughly 5 percent of the national GDP, according to Virata, and is projected to hit 10 percent this decade.

Maintaining growth will require more agent specialization: for example, trained Filipino nurses phoning US patients after surgery to check their symptoms. The British government is even relying on a Philippines center to process payroll claims for its foreign diplomatic offices — including its embassy in India.

Within three years, the industry is expected to employ 1.3 million Filipinos, up from 900,000 last year, according to IBPAP. This expansion is coming at India’s expense. Even CEOs of Indian outsourcing giants have thrown up their hands and opened centers in the Philippines.

This boom is also transforming the way some Filipinos live.

A 3 p.m. call from New Jersey rings a phone at 3 a.m. in Manila, the nation's capital and its call center hub. Agents’ shifts often end around dawn. Bars situated around call centers offer 7 a.m. happy hour specials to workers on their way home, where agents flop down in bedrooms with blacked-out windows.

In Manila, traveling call-center executives can find hotels that won’t run noisy vacuum cleaners during the day and which serve breakfast in the late afternoon. A construction firm called Megaworld is even spending $5 billion to create mini-cities — with offices, shops and homes — that operate on the American sleep/wake cycle.

But according to the crop of message boards and blogs run by Filipino call center agents, adopting vampire hours has its social costs. Common complaints include poor diet, abundant stress and even a reputation for sexual flings in the office.