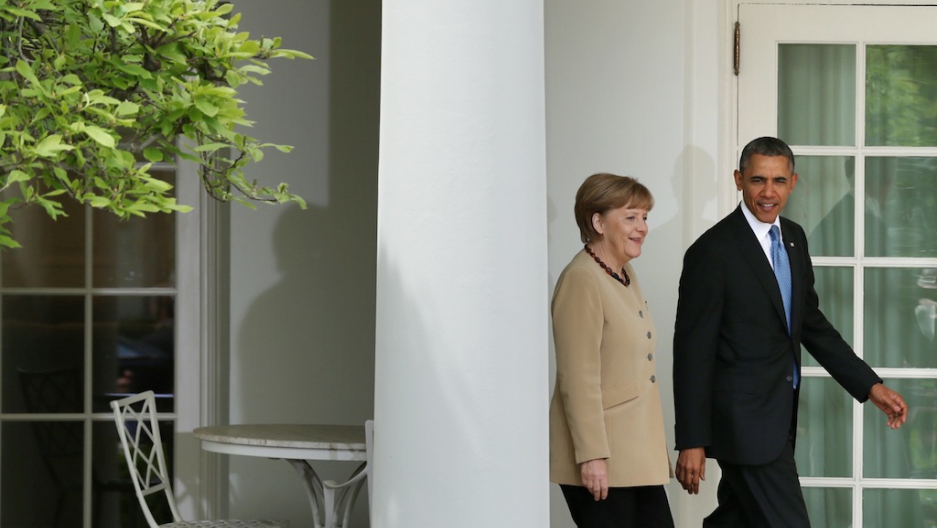 U.S. President Barack Obama and Chancellor Angela Merkel hold a joint news conference in the Rose Garden at the White House May 2, 2014 in Washington, DC. Obama and Merkel emphasizied their continued support for the new government in Ukraine and their critisism of Russia after the failure of last month's Geneva Agreement. The Ukranian military said Friday that pro-Russiaon militants in the eastern part of the country had used sophisticated weapons to shoot down two of its helicopters.
Credit: Chip Somodevilla
Share

WINSTON-SALEM, North Carolina — The crisis in Ukraine is the product of many causes, but US foreign policy mistakes have been important factors.

First, in assuming that democracy and markets are desired and inevitable around the world, the US is blinded to nationalistic reactions in Russia. As NATO expanded through former Warsaw Pact countries, Russia felt increasingly encircled by the West and was not reassured when told these events were desirable and not threatening. Putin has clearly said he is determined to prevent such an outcome in Ukraine.

Putin insisted his actions in Crimea had stopped NATO ships from docking “in Sevastopol, the city of Russia’s naval glory.”

Second, after the economic pact with the EU was rejected by President Viktor Yanukovych, the US acquiesced to a violent revolutionary overthrow of his elected government in Ukraine. The US is now an apologist for the mass civil disobedience that led to the seizure of government buildings.

In February, Yanukovych and the three main opposition leaders signed a deal brokered by Russia and the European Union to end violence and prepare a political transition. The next morning revolutionaries led by Right Sector fulfilled their promise to ignore the agreement through violent action.

The chaos that had been centered in Kiev then shifted instability to eastern Ukraine. Many Russian speakers there feared they could be victimized by a Ukrainian-speaking majority in an illiberal democracy heavily influenced by militant groups like Right Sector, a nationalist political party with right wing views.

Third, the US has reacted to events in Ukraine by threatening, then imposing economic sanctions.

Tough economic sanctions are unlikely to stop Russia from pursuing what it sees as vital national security interests on its border. Such sanctions undermine a key basis for peace, the integration of economic interests.

Economic warfare increases the risk of a dangerous military conflict. Although largely symbolic sanctions have been imposed to protest Russian actions in Crimea, truly punitive economic measures should be implemented only in the event of civil war, such as a Russian invasion of East Ukraine. Short of that, tough economic measures and talk can only complicate an already difficult diplomatic task.

What are Russian intentions in Ukraine? Crimea should be viewed as a special case, ruled by Russia for centuries and with Sevastopol founded by Catherine the Great. A majority of Crimean residents favored annexation by Russia once the overthrow of the elected government in Kiev had taken place.

East Ukraine has a different political landscape. Although a significant minority may favor annexation by Russia, surveys of residents show a clear majority wanting more regional autonomy as part of a united Ukraine.

Putin knows that a military takeover of East Ukraine would be risky and costly. More likely, Russia simply wants to exercise heavy influence on Ukrainian politics, through an arrangement that keeps East and West Ukraine together. The recent accord negotiated in Geneva is consistent with this point of view.

The same can be said for the presence of covert Russian operatives in East Ukraine. Their actions in support of pro-Russian militants have forced Kiev to acknowledge that some regional autonomy is needed.

If it yields control of a large swath of territory in East Ukraine, Kiev is placed in a weakened negotiating position. In that event, covert Russian forces would help implement the details of the regional authority that Russia wants, including the autonomy to strike separate economic agreements with Russia.

Allowing that as part of a diplomatic solution would also allow economic agreements between the EU and West Ukraine. If this constitutional arrangement was further cemented by long-term discounts on Russian natural gas, such an outcome should be viewed as more than acceptable.

Meantime, violence should be rejected as part of a political solution. The US should not provide any military aid that could add to an already combustible atmosphere.

The Geneva accord’s call for all militant groups to disarm, however worthy as a goal, is unenforceable until a final diplomatic solution is reached.

The US should not encourage the use of the Ukrainian military to suppress the rebellion in East Ukraine. Recent attempts at intervention only resulted in the humiliating surrender of Ukrainian forces. Such military interventions could lead to civil war, perhaps provoking a dangerous US-Russian confrontation.

Charles R. Kennedy is an associate professor of management at the Wake Forest University School of Business in Winston-Salem, NC.