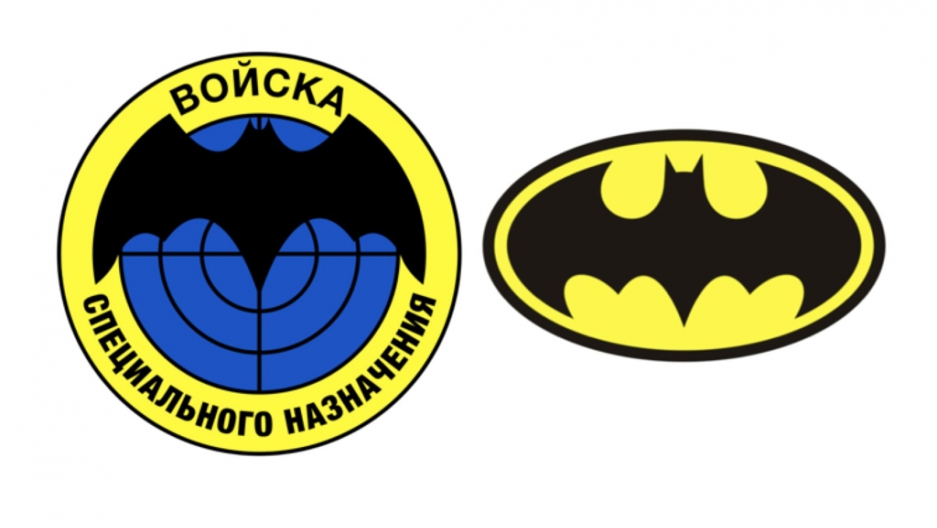 Are Russian special forces soldiers operating in eastern Ukraine? The Ukrainian government says yes and it's offered some photos as proof.

The same man was sighted in Slovyansk and Kramatorsk just a few weeks ago, according to Kyiv.

The authenticity of the photos remains in dispute, but we're actually kind of wondering about that thing on his sleeve. Is that a... Batman logo?

Pretty damn close. It’s a bat covering a globe and it's the symbol of the GRU Spetsnaz, elite units of Russia’s largest military intelligence agency.

While some people have also noticed this resemblance (because it's hard to ignore A RUSSIAN ORGANIZATION THAT HAS A BATMAN SYMBOL) no one has come up with a solid explanation for why the two designs look so similar.

But here’s what we do know:

1. The bat is a symbol of military reconnaissance.

It's a pretty obvious choice, actually. Bats are stealthy, fly at night and use echolocation to navigate and hunt their prey — much like the radar systems used in military applications to detect aircraft, ships and other obstacles. Bats are particularly beloved by nightfighter, patrol and observation squadrons, probably due to that whole “sneaky death from above” thing.

Bats were incorporated into military insignia long before the GRU Spetsnaz, which was formed after World War II. The winged rodents first appeared on a UK Royal Air Force badge in 1917, along with the Latin motto Per Noctem Volamus — “We Fly Through The Night.” Since then, naval and aviation squadrons around the world have embraced the bat as an emblem, including the United States, Canada, South Africa, Japan, Belgium, Israel and the former Republics of the Soviet Union, including Belarus and Ukraine.

Batman debuted in Detective Comics No. 27 in May 1939. The first logo was pretty literal and features the superhero with his cape spread out like bat wings. It’s undergone countless revisions over the years, which you can watch in this mesmerizing gif created by Time. While prints of the iconic issue sell for over $1 million, DC Comics is distributing a free, special edition this July — designed by Chip Kidd and written by Brad Meltzer — in honor of Batman's 75th anniversary.

4. The thing-that-looks-like-a-Batman logo is also on the floor of the Russian military agency’s headquarters.

Hopefully this detailed treatise has answered all of your questions, leaving just this one:

Who would win a fight, Batman or RUSSIAN BATMAN — a.k.a. Batmankoff?

This is Russian anarchist Batman, whose parents were killed by the KGB. He has sworn vengeance on communism and appears in Superman: Red Son. (Batman Friend Zone/Facebook).

We’ll get back to you on that. But both would totally beat Superman. #TEAMBATMAN