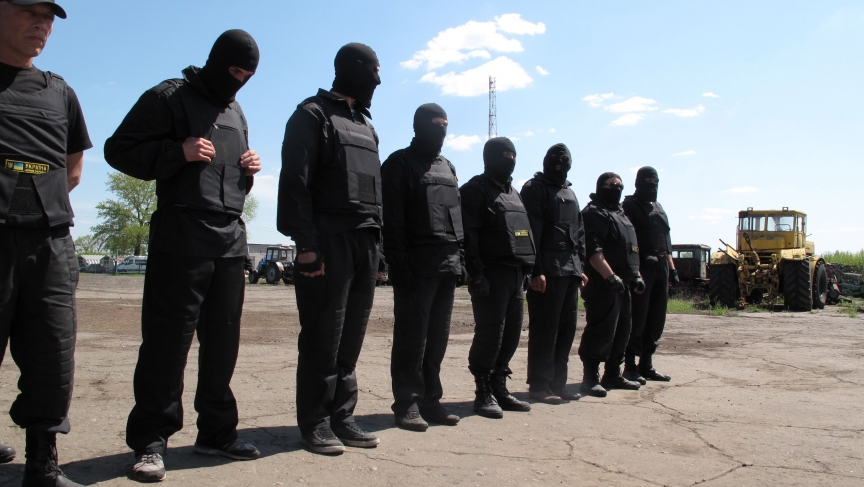 Members of a pro-Ukrainian militia in training.

In the eastern Ukraine city of Slovyansk, government forces are attempting to dislodge armed separatists who have occupied buildings and checkpoints there. Some citizens are reportedly standing in front of tanks and waving Russian flags.

With loyalties divided within the population, some fear the conflict could spiral into a full-blown civil war. And now, pro-Ukraine militias are forming to counter the separatists in another ominous sign of escalation.

On a farm about 60 miles southwest of Slovyansk, more than a dozen masked men, dressed head to toe in black and carrying automatic rifles, stand amidst idle tractors and other agricultural equipment.

They call themselves the Donbas-1 battalion, a volunteer force formed in recent weeks and committed to fighting for the unity of Ukraine.

Not far from here, armed separatists have seized nearly a dozen administrative buildings in the Donetsk region. Local police and the military had been unable — or unwilling — to stop them.

The militia’s masked commander, 38-year-old Semen Semenchenko, says that’s why he has helped form this group. He claims the loyalties among local authorities are divided.

Semenchenko claims he’s a captain in Ukraine's regular army reserves, but says the local government refused to activate his unit.

“At first we tried to coordinate with our local national guard units, and we just wanted to help,” he said. “But now, it’s all being coordinated officially through Kiev — they’ve taken charge.”

There’s no evidence that Semenchenko’s group has done any actual fighting. But militias like these may be part of Kiev’s strategy to combat Ukrainian separatists.

During my visit, an official car pulls up with plainclothes officers from the SBU — that’s Ukraine’s successor to the Soviet-era KGB.

One officer, who wouldn’t speak on the record, admitted that units like these are running operations with the blessing of higher-ups.

They’re allowing what he called “patriotically-inclined” citizens to take up arms for the unity of Ukraine.

So who are these militiamen? Most hide their real identities, but they claim long ties to the region. And some boast real combat experience.

A man, who calls himself Zakhar Zakharidze, is a 45-year-old ethnic Georgian who was born in what is now the self-declared republic of Abkhazia.

In the early 90s, Zakharidze fought Russia-backed Abkhaz separatists and ended up as one of the more than 200,000 ethnic Georgians expelled from the region when Georgia lost the war.

Twenty-two years later, he’s raised a family and has grandchildren in Ukraine. He says he doesn’t want Ukraine to break up the way Georgia did. He is proud that Ukrainian people are rising up to resist separatism and what he sees as Russian meddling.

He shouts a nationalist slogan, “Glory to Ukraine!” and the men answer, “Glory to our Heroes!”

It’s exactly these kinds of slogans that make many in eastern Ukraine uncomfortable. It reminds them of Ukrainian nationalists, largely supported by Germany, during the Second World War.

But Semenchenko, the militia commander, insists his mission is to unify the people of Ukraine, not divide them. He says he knows a lot of the separatists — and they know him.

“People who we know personally, we talk to them them normally and they understand that we’re not ultra-nationalists or fascists,” he said. “We are people who have lived on the same street and know each other for a long time.” He says his real adversaries are criminals and opportunists trying to create a civil war for their own ends.

Semenchenko and his men show off their rifles, field-stripping them in the sunshine for visiting reporters.

The acting Ukrainian government has repeatedly called on militias to disarm … but they’ve only addressed separatist groups, refusing to acknowledge that pro-Kiev militias exist.

This volunteer battalion may be relatively small compared to the more heavily-armed separatists. But as the Ukrainian government continues to lose control, they may try to rely on these small-scale, quasi-official militias to fill the vacuum.

And these guys could very well find themselves fighting their neighbors.