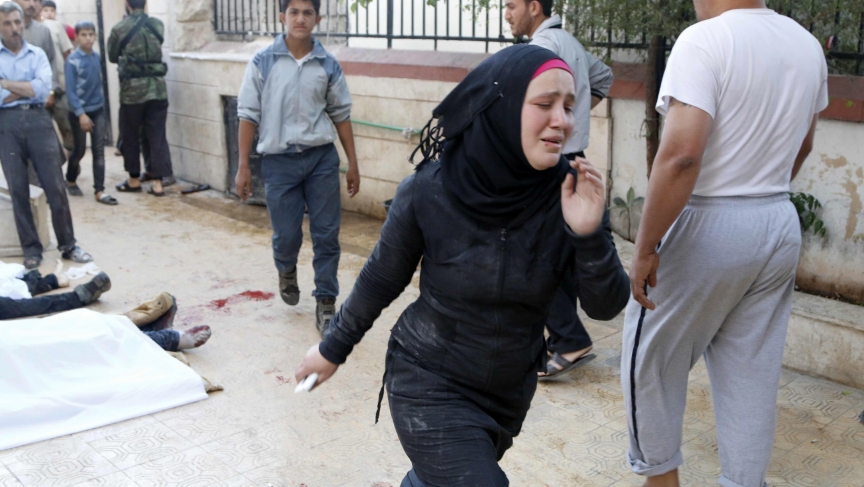 A woman runs past bodies after, according to activists, two barrel bombs were dropped by forces loyal to Syria's President Bashar Al-Assad in Aleppo, Friday.

US Civil War general William Tecumseh Sherman* famously once said, "War is hell." That perhaps has never been more true than for the people of Aleppo, Syria.

Syria's civil war came to Aleppo in July 2012 when rebels attempted to seize it. The two sides have been stuck in a bloody stalemate ever since.

And the ordinary people of the city have been stuck in the middle.

“We were there when the battle began,” says the BBC’s Ian Pannell, who’s just gotten out of the city. “And the contrast between then and now couldn’t be greater."

Pannell says that back then, it was Syria’s largest city, its economic hub, a vibrant city home to millions of people.

"Today it is a shadow, a shell of its former self," he says. "Whole neighborhoods have been practically emptied as residents have fled. Barely a district has not been touched by what feels like relentless bombardment that hasn’t really stopped throughout that period. … So you see widespread destruction, widespread deprivation, as people struggle to eke out a living.”

About 70 percent of the city’s pre-war population has fled.

One of the greatest terrors for Aleppo’s remaining residents are the barrel bombs. Barrel bombs are essentially oil drums that are packed with explosives and pieces of metal.

“They’re literally thrown out of helicopters, which are flying at about 6,000 or 7,000 feet to avoid rebel anti-aircraft weapons," Pannell says. "So it’s an indiscriminate weapon — that’s not my word, that’s the word used by the New York-based Human Rights Watch organization.”

The government says it’s targeting terrorists, but Pannell says “if that is their intended target, this is a very imprecise, crude weapon to use.”

”You see the helicopters flying up,” says Pannell. ”And you get this sense of dramatic, spine-tingling tension as the city almost freezes. Everybody looks up into the sky — children, old men, families, and fighters — waiting to see where the helicopter is and wondering whether that bomb is going to be dropped in their neighborhood.”

“We saw the impact of these devices,” says Pannell. He says the devastation is total, “especially for anything that passes for a residential home.”

Human Rights Watch has used satellite imagery to identity about 350 attack sites this year. Hundreds of civilians have been killed and many more wounded.

“You just never know where they will land,” says Pannell.

*Editor's note: Several people wrote to tell us that we had misidentified Ulysses S. Grant as the person who said, "War is hell," in our first version of this story. We updated the story to correctly identify Wiilliam Tecumseh Sherman as the source of the quote. We appreciate the help.