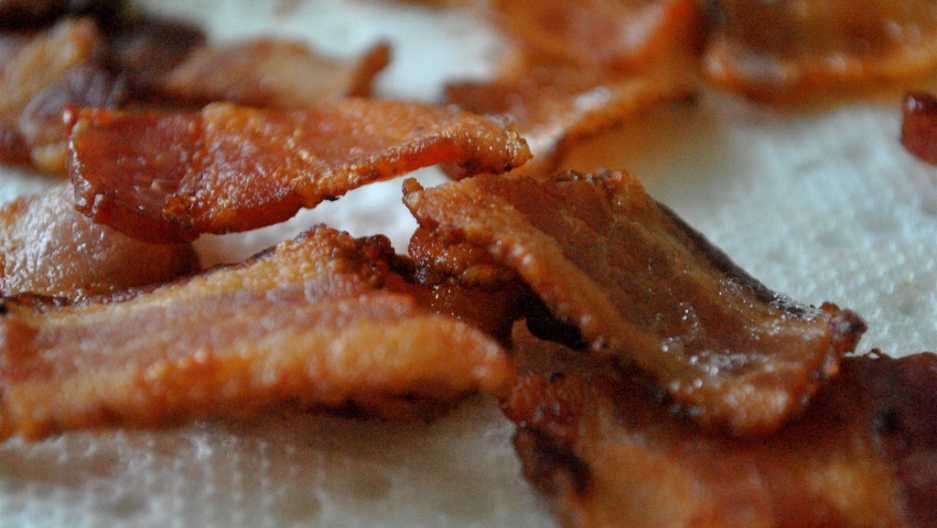 This is bacon. It is not bacon from Beit Jala. This is for your protection. Beit Jala bacon would scorch your eyeballs with its awesomeness.
Credit: cookbookman17
Share

BEIT JALA, West Bank — The fact of the matter is that it is not that difficult to buy pork in Jerusalem.

Most supermarkets in the city, including the large chains, are either kosher or halal, and thus do not carry the product. But between the secular, native-born Muslims and Jews, Christians, the local tribe of internationals, and Russian Jews who lost many kosher habits during 70 years under communism, a significant number of consumers hanker after the rosy meat.

In fact, the stringency of Jewish and Muslim prohibitions against pork may well serve to heighten the desire for it in a city that almost glows with religious fervor.

In recent months, among journalists and diplomats stationed in town — men and women alike — there has been a quiet thrumming about someone referred to as "the beautiful pork guy in Beit Jala."

GlobalPost set out to uncover what the buzz was all about.

Beit Jala is a Palestinian Christian town between Jerusalem and Bethlehem, right on the seam between Israel and a potential future Palestinian state. Its inhabitants are largely Greek Orthodox Christians. The fact that it is outside of Israel proper makes it illegal to re-enter Israel carrying meat, but the law is laxly applied.

The Alsoos family has had a butcher's shop in the center of town, and a pig farm adjacent to it, since 1920.

Today, the shop is small and conspicuously well-kept, with two large meat refrigerators behind the counter and, in the front of the store, two smaller display cases holding an impressive array of salamis, mortadella, smoked bacon, and sausages in an alluring rainbow ranging from cream to a deeply rusty red, studded with points of fat.

At any given moment at the Aziz Butchers, you are likely to hear three or four or more languages murmured by customers considering their options.

Busily manning the counter is Raf Alsoos, 24, a third-generation pig farmer and general meat man, who, as GlobalPost can attest, possesses a winning smile and warm manner that easily draws customers who may have more mundane sources of pork closer at hand.

All the fresh meat is produced at the Alsoos farm. For any locavore meat-lover trapped in a desert of pre-cut, mass-industry meat counters, the cuts here are a sigh-worthy dream: bright and light and pink. Raf commonly advises the doubtful about which cuts better fit an Easter barbecue (chops and souvlaki cubes), and which would be best roasted and served on a platter. Sixty percent of their current business, according to Raf, comes from "journalists and embassies."

To the almost certain surprise of his international clients, many of whom delight in the titillation of crossing from Israel into Palestine for the procurement of a taboo substance, all the smoked and processed meats come from … "Tel Aviv," Raf says, laughing. "Some friend of my dad's makes it. They've known each other since 1993."

These meats can be said to be doubly smuggled: spirited informally into Palestine in the trunk of a car, and then carried back into Jerusalem in small portions in shopping bags, under the eyes of checkpoint soldiers who do not seem unduly exercised by the prospect of illicitly imported salami.

Aziz, Raf's father, says that business boomed between 1970 and 2000. That is local code for describing the relatively prosperous years bracketed by the Six Day War, in 1967, and the second intifada.

"Before the intifada and the wall going up," Aziz says, referring to the security wall Israel built during the eruption of violence in the early 2000s, "eighty percent of my clients were Israelis. I have a lot of Israeli friends."

In the early '90s, looking for new partnerships, he met Chanan Abramovich (the Tel Avivite Raf mentioned), who had recently acquired a flagging pork business from Karl Berg, a retiree.

Abramovich, who is 62, says "Aziz and I met many, many years ago. It wasn't just salami. We've been friends for years. He and I worked together trading males and females for our farms, or I'd bring him medicine for the animals."

Today, Karl Berg, which retained its original name under Abramovich, is established as one of Israel's top pork producing operations, beneath the unrivalled pork superpower Kibbutz Mizra. Historically, the collectivist kibbutz movement has been militantly secular, and several kibbutzim currently produce pork products.

The Romanian-born Abramovich, whose family fled the communist regime when he was 12, owns the processing plant in Holon, a Tel Aviv bedroom community, and a pig farm of about 10,000 heads in Iblin, a Christian town in the Galilee. In Holon they smoke the bacon, for example, that the Alsoos family’s customers so crave.* The Abramoviches also own a shop in Mahane Yehuda, Jerusalem's central market, which proved useful to Aziz Alsoos after the wall went up. For a while, "when I had orders from Jerusalem I'd take the meat from Karl Berg in the market and not from my shop, because of the checkpoint."

More from GlobalPost: At Mahane Yehuda market, Friday is the new Saturday

In 2004, the Alsoos family moved to Canada to seek a better future. Aziz now runs a Middle Eastern restaurant outside Toronto, from which he spoke to GlobalPost.

But last July, Raf, who had helped his dad out every summer, decided to come back and run the family business with an older brother. "I have my own business," he shrugs. "Why would I want to work for anyone else? And it's fun to work with meat," he adds.

The next generation is taking over at Chanan Abramovich's business, as well. When he spoke with GlobalPost, Abramovich, who travels frequently, was "in Normandy, enjoying the seafood." Back at the meat plant, his son Ran, 29, was expecting a pick-up from Raf Alsoos that very day.

Like Raf Alsoos, Ran Abramovich proudly says the business is "100 percent meat, no fillers, no substitutes." The two families' intertwined businesses — youthful, artisanal, local — could be a Brooklyn cliche, all the more startling considering the West Bank surroundings.

But it's no surprise that the Alsoos family's Jerusalem clients are willing to bend the rules to get their hands on the meat. The pork chops grill up crisp and succulent, and Karl Berg's black pepper salami is an irresistible accompaniment for a cold beer.

The fact of the matter is, not only is pork available in Israel: It's superb.

*The language in the previous two sentences has been changed to clarify that it is in Holon, not Iblin, that the bacon is smoked.