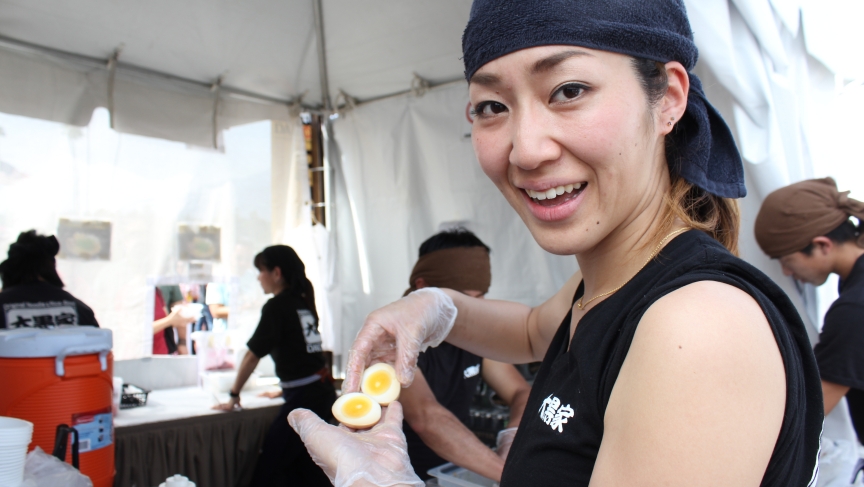 Eggs served in ramen are typically soft-boiled — marinated, creamy and cooked for about six-and-half-minutes in boiling water. Assistants carefully slice each egg with a thread and place the halves in each bowl (this process also helps explain why those lines get so long).

Just to set the scene a little: It’s a hot afternoon and Japanese chef Tagashira is sweating over a vat of broth at a rolling boiling. It’s slightly cloudy, he has tended it it for hours, and it will form the base for his favorite dish: tonkotsu pork ramen.

And Tagashira, who goes by his last name only, is a master at it. Through a translator, he tells me what he goes into his broth. Head bones from pigs and water. Whole skulls bob in the vats.

Next, Tagashira will add handmade thin noodles, a variety of other ingredients, and finally serving his soup at the largest ramen festival in the United States, recently held in Los Angeles. About 30,000 people showed up over two days, some waiting up to two hours in line, to devour the food, served by about a dozen select ramen restaurants representing different parts of California, Las Vegas and Japan.

The scene makes one thing clear: the ramen craze that started a few years ago is still at full steam. Industry experts say about six ramen shops are opening up every month in America now, and in first-ever places like Ohio and Kansas.

At the festival, LA Weekly food writer Amy Scattergood helps me navigate the scene. “Oh, my god, we’ve got to do Tsujita Tokyo,” she says, adding that Tsujita’s restaurant in Los Angeles is one of the best ramen shops in the city. 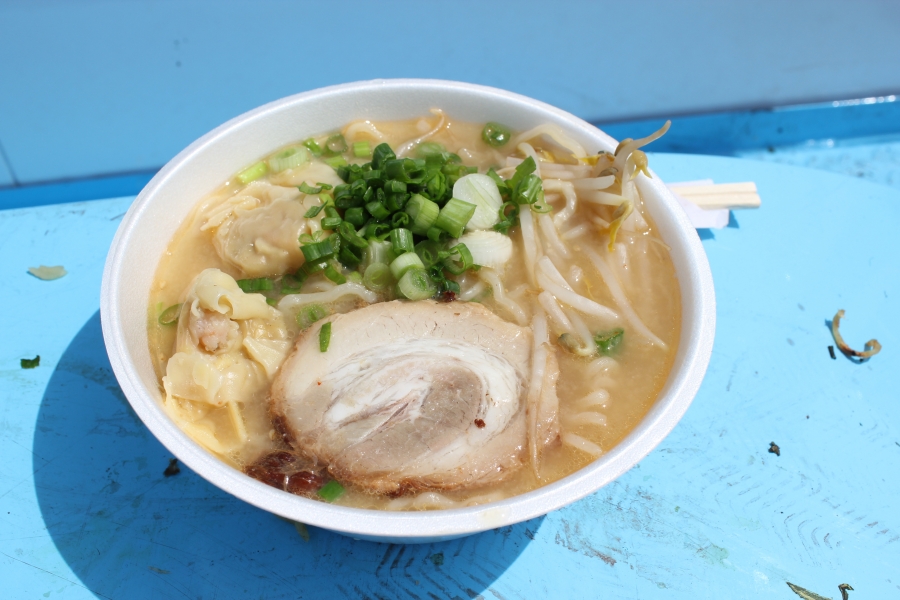 Ramen from the popular Tsujita Tokyo booth at a recent festival in Los Angeles devoted solely to the food.

We head to the back of the food stalls and talk to Tsujita chef Masahiro Shimomura. His ramen is coveted for a few reasons, including its delicate mix of bamboo shoots, scallions, black wood-ear mushrooms and roasted pork.

Shimomura also tells me about another important ingredient: the egg. You can tell a lot about a ramen shop by how they prepare them, he says. His are soft-boiled — marinated, creamy and cooked for about six-and-half-minutes in boiling water. Assistants carefully slice each egg with a thread and place the halves in each bowl (this process also helps explain why those lines get so long).

Shimomura is also eager to offer his ramen-eating tips. First, he says: don’t linger. “Eat the noodles while they’re hot, before they get soggy,” he says. “Your bowl should be empty within minutes.”

And no talking, he says. Do that when you’re done.

Also, you must slurp.

That’s a bit of an art though. Scattergood pulls out chopsticks from her bag and quickly digs into her bowl. “Those are awesome noodles because they’re still chewy,” she says.

She sort of inhales her bowl. And that’s the point. “Americans don’t want to slurp,” she says. “And that’s wrong.”

At another booth, Chef Kasai from Toyama, Japan, serves a peppery Sichuan-style ramen. He remembers eating ramen as a kid, but the instant-noodle stuff from a Styrofoam cup. He says everything changed when he started trying different types of ramen in Tokyo.

And that’s his tip to ramen newbies: keep exploring. Some soups feature thin, firm noodles, while others include the wavy and fat kind. And broth can vary too, from heavy to light, with a golden shimmer.

Ramen is a bit like dating, Kasai says with a laugh. Keep trying, and you'll eventually find the right one for you.

A (very informal) Global Nation survey. What's the best place to get a bowl of ramen? Tell us where and why by following this board, creating a pin and sending it to us. Or tweet with #ramennation.