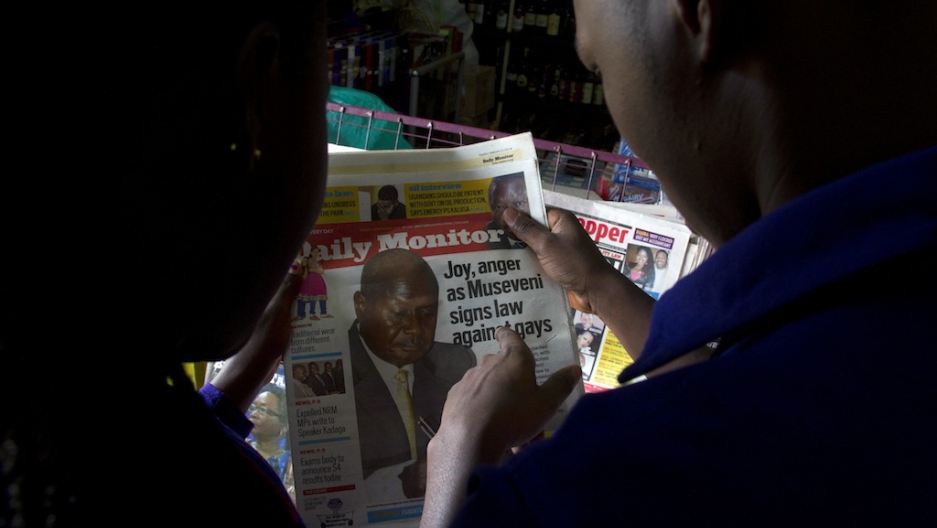 People read Uganda's local dailies in Kampala on February 25, 2014. On Monday, President Yoweri Museveni signed a bill into law which holds that repeat homosexuals should be jailed for life, outlaws the promotion of homosexuality and requires people to denounce gays.
Credit: AFP
Share

SALEM, Virginia — Uganda’s new anti-homosexual law has generated chatter around the world. Outside Uganda, and Africa in general, this legislation is seen as an outrage. It comes from a president who is past his prime, a man who has ruled Uganda since 1986 and whose mind seems impervious to change.

The narrative on social media leans toward the view that President Yoweri Museveni is deeply misinformed about sexuality in general. His idea that oral sex is abhorrent and that kissing his wife in public would cost him the presidency is as obsolete as his notion that homosexuality is abnormal and pathological.

Yet these very ideas about Musenevi’s state of mind may themselves flow from an international audience that is ignorant of Uganda’s political culture and, perhaps, uninformed about the nature and character of social change there.

If the issue of homosexuality were on a ballot in Uganda, the referendum would favor the law by upwards of 80 percent. This is not to suggest that Ugandans are homophobic. Rather, Ugandans need time and space to process such complex social, psychological and cultural changes.

What the world has tried unsuccessfully to do in much of Africa is impose more progressive values. Even in the West, where liberal thought prevails, the debate about gay rights is still very much alive, as the tensions over gay marriage illustrate.

For a long time, Uganda has been the battleground for two opposing forces: the conservative United States Evangelical Church and liberal-thinking groups pressing for gay rights.

In 2010, David Bahati, a member of the Ugandan Parliament, was hosted by in the US by several evangelical groups. Upon his return, he co-authored the original and more draconian anti-homosexuality bill that would have imposed a death sentence on anyone engaged in homosexual acts. The bill had the strong support of President Museveni and especially Uganda’s born-again first lady.

Supporters of gay rights found their most prominent voices among Ugandan gay activists Pepe Onziema, Kasha Nabagesera Jacqueline and prominent Makerere University School of Law Professor Sylvia Tamale. This group lost the struggle because its views went against the more popular, deeply entrenched conservative views of the early missionary era. Homosexuality has been a crime in Uganda since a colonial era law defined so-called sex acts as “against the order of nature.” Laws prohibiting same-sex sexual acts were first put in place under British colonial rule in the 19th century. Those laws were enshrined in the Penal Code Act of 1950 and retained following independence in 1962.

The issue over homosexuality has boosted President Museveni’s political standing. Anti-imperial elements and the clergy have lined up behind him for the 2016 elections. As spiritual leaders, the clergy represents an influential constituency in a country that is bursting with passionate, church-going, conservative Christians.

Uganda’s Muslim community — small relative to Christians — is even more conservative and likely to add to Museveni’s political strength. To further boost his popularity, the president has agreed to lead a public anti-homosexuality march through the capital, Kampala, as a show of support for the new law.
What appears to be unreasonable to the world outside Uganda is playing out perfectly for President Museveni and the parliament, where his National Resistance Movement party holds a formidable majority.

Threats of cutting off aid from the US, Sweden, Norway and Denmark have limited impact on Uganda, a country that will soon market its oil on the international market. Ugandans note that states such as Nigeria with similar laws have not suffered noticeable ill effects from perceived homophobia.

This law will remain on the books despite international pressure and a current court challenge in Uganda. It is in keeping with prevailing popular and political culture, and perfect for a populist president desperately in need of a dose of legitimacy.

Joshua Rubongoya, a native of Uganda, is professor of political science and chair of the public affairs department at Roanoke College in Salem, Virginia.