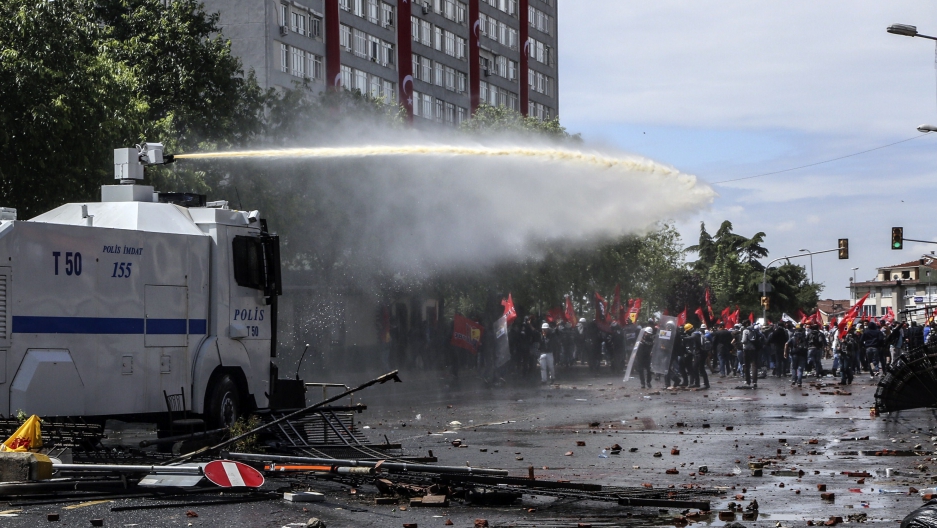 Turkish protesters take cover as riot police use a water cannon to disperse a May Day rally near Taksim Square in Istanbul.
Credit: Gurcan Ozturk
Share

They only needed to shut down the city of 14 million to do it.

May 1 is International Workers' Day, a traditional day of labor related-demonstrations. In a sign of heightened tensions between the ruling party and anti-government movements in Turkey, the Istanbul governor’s office shut down all public transportation into the city center during the day to prevent demonstrators from holding a planned rally on the central Taksim Square.

Undeterred, several groups of protesters attempted to reach the square from various points of the city. In the Sisli district, a few thousand pro-labor protesters barely made it two blocks from the union association headquarters before running into tear gas and riot police.

“People were standing outside the [union association] headquarters, peacefully assembling," said Andrew Gardner, Amnesty International's Turkey expert, who was with the protesters when the police took action. "The police, without any justification, used tear gas, water cannons in huge quantities against this crowd,” he said.

In the end, none of the protest groups made it within half a mile of Taksim. The Istanbul governor’s office said that 142 demonstrators were detained across the city. It said 90 more were hospitalized as police intervened to halt their advance.

Leading up to the demonstration, the governor’s office claimed to have intelligence of an imminent threat to security forces, and proposed the unions hold their rally at a designated location in the suburbs.

Gardner called such claims a “phony” pretext to keep the annual protest out of sight.

More from GlobalPost: 48 hours on the streets with Istanbul's protesters

In addition to shutting down public transportation, a force of 39,000 riot police shuttered Istanbul’s main road arteries for miles leading to Taksim. All intersections onto those thoroughfares were closed off with cage-like police barricades, effectively dividing central Istanbul into quarantine zones.

In most cases, even local residents, credentialed journalists, and tourists were barred from crossing the streets, leaving many stranded. Usually vibrant and crowded central Istanbul was left virtually deserted save for riot police manning barricades and lounging on sidewalks.

Two managers at the fully-booked Hilton Istanbul Bosphorus Hotel near Taksim said they were forced to cancel all excursions and advised their guests to remain on the hotel grounds. Short of leaving through a staff exit in the rear, one manager said, guests had no way out of the hotel unless they chose to try to talk their way through the heavily guarded police barricades just outside the hotel’s entrance.

Both managers spoke on condition of anonymity for fear of reprisals.

The citywide crackdown marks the latest episode in an authoritarian slide by the ruling Justice and Development Party (AKP), which in recent years has been accused of trampling dissent and eliminating checks and balances within the government.

Just today, Freedom House released its Freedom of the Press in the World report, announcing that Turkey had dropped from being considered “partly free” to “not free,” in terms of its media environment.

Jennifer Dunham, a senior research analyst on the press freedom project, said that Turkey fell sharply in the rankings over the last year for pressures put on journalists covering Gezi Park demonstrations and other anti-government protests.

According to the Committee to Protect Journalists, 21 Turkish journalists are currently in jail for their work, and dozens have been fired for their coverage of protests.

At least nine journalists were injured during Thursday’s protests in Istanbul and many more restricted in their coverage by police.

With violent clashes between protesters and police ongoing around the corner, 43-year-old protester Bahadir Ensari sat in the entryway of an apartment in Sisli, resting his eyes and lungs from the tear gas. Ensari said he had expected a police crackdown, but came to the protest anyway.

He said he has been unemployed since being fired from his job as a ship engine mechanic last summer. He claims the government pressured his employer to terminate him after he publicly called for labor actions among other maritime workers. Now, he says, he is "blacklisted." Political firings are not uncommon in Turkey.

“I’m here because I’ve lost everything,” he said.

He called the AKP government a “dictatorial regime," but said May Day has always been a struggle for workers seeking to protest.

In 1977, under a secular authoritarian government, 34 protesters were killed on May Day in Taksim when panic and violence broke out between the demonstrators and security forces. May Day demonstrations were then banned from 1980 until 2009, when the European Court of Human Rights ruled that the ban was a violation of protesters’ right to peaceful assembly.