Two weeks and still no word.

All over Nigeria, people are demanding that the government take action to find the more than 200 girls kidnapped from a boarding school in the northern town of Chibok. Armed men dragged the girls out of bed and forced them into a convoy of trucks heading into the forest near Cameroon.

The Islamic militant group Boko Haram, which has been waging a violent campaign in northern Nigeria, is believed to be responsible.

The abduction of the girls has galvanized Nigeria like nothing else has in recent years. There have been demonstrations in Lagos, in Kano, and in the capital Abuja. On Wednesday, hundreds took to the streets in the rain, singing “All we are saying is bring back our girls.”

In the rally that followed, community leaders promised to continue the protests until every one of the girls was safe at home.

Activists have also launched Twitter campaigns, with the hashtags #BringBackOurGirls and #BringBackOurDaughters. 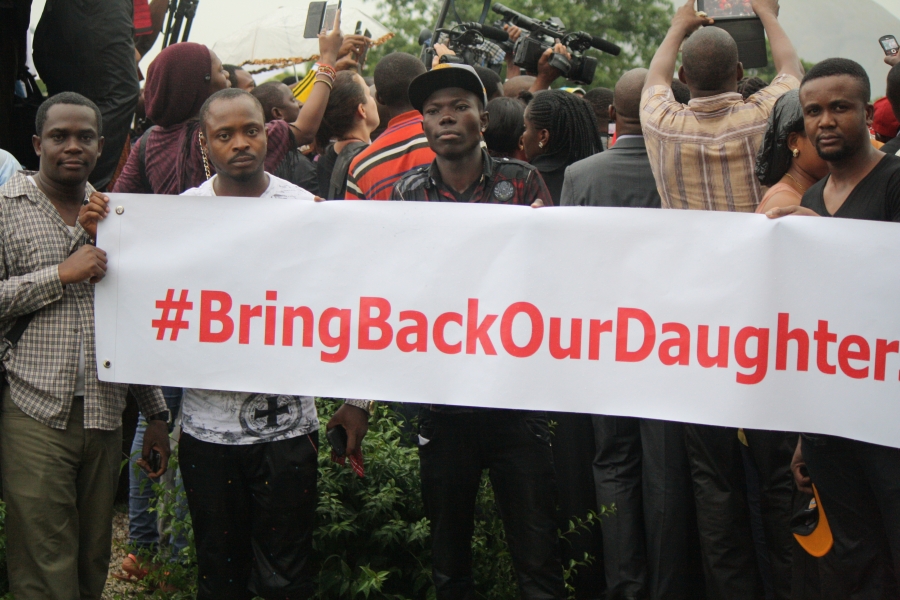 At a demonstration in Abuja, Nigerians call on their government to do more to bring back the kidnapped schoolgirls.

“You need a hashtag so people can rally around a goal,” says Yemi Adamolekun, executive director of Enough Is Enough, a Nigerian human rights organization. “The goal is that we want them to bring back the girls. Two hundred girls and we don't know where they are.”

Her group has been tweeting using #BringBackOurGirls to its more than 46,000 followers with the hope that it will go around the world. In the past 24 hours, the hashtag been tweeted 243,539 times.

On Thursday, Nigeria’s Defense Ministry issued a statement saying it's committed to the search for the missing girls. But Adamolekun says the Nigerian government has been mostly silent since the military retracted a statement claiming to have rescued the girls two weeks ago. She says the Nigerian press has been relatively quiet as well, and that’s why she and other activities have taken to social media.

Without the pressure of social media campaigns, she says, the government might quietly let the issue drop.

That's what nearly happened two years ago, in another part of northern Nigeria, according to Hamzat Lawal, who heads Follow the Money, an anti-corruption group in Abuja.

At the time, hundreds of children had died in one ofthe worst cases of environmental lead poisoning in modern history. The exposure came from unauthorized gold mines. While some villages had been cleaned up, Bagega, a remote mining town, remained contaminated.

“Our government was not taking action, so we needed the [Nigerian] public and the international community to hold the government accountable,” he says. “That was why we came up with #SaveBagega.”

Lawal says 48 hours after he first tweeted #SaveBagega, it had been retweeted by more than one million people, including a Nigerian senator who joined the campaign. A few months later, after years of inaction, the Nigerian government released money to clean up the village. Since then, thousands of children have been treated for lead poisoning.

At Wednesday’s rain-sodden protest for the Nigerian girls, activists held up hand written and printed signs displaying the hashtags associated with their demands.

They say the remote forests where the girls are thought to be held are unlikely to have Internet, but government officials do, and they won't be able to stay silent amid all the noise, at their rallies and online.