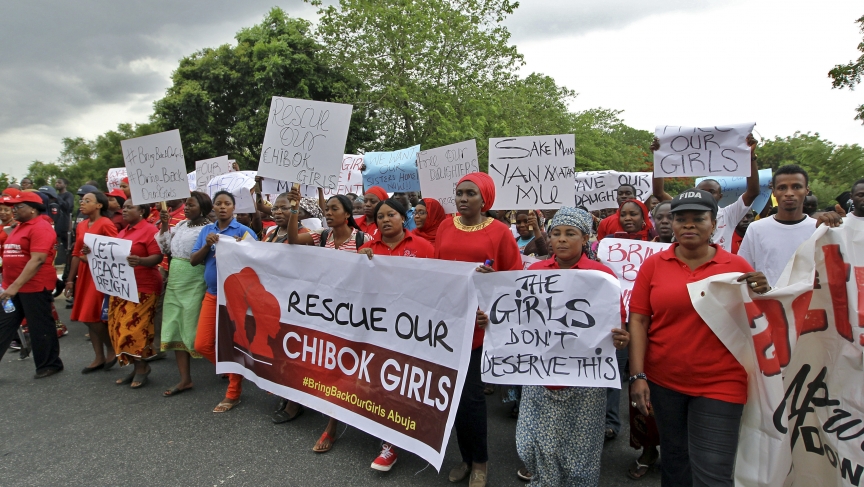 Members of various civil society organizations (CSOs) protest against the delay in securing the release of the abducted schoolgirls who were kidnapped. Dozens of protesters gathered outside Nigeria's parliament in Abuja on Wednesday called on security forces to search harder.

Two weeks ago, the Nigerian militant group known as Boko Haram kidnapped more than 200 girls from a state school in a remote northern part of the country.

So far, the government hasn’t been able to rescue these teenagers and now there are rumors of the girls being forced into mass marriages with their captors.

Alexis Okeowo, a freelance journalist based in Lagos, recently spoke with family members of the missing girls, as well as a few girls who escaped. Okeowo says the mass kidnapping is one of a series of attacks on schools and villages over the past five years by the jihadist group, which has vowed to combat Western education and other secular values. The government and military has largely turned a blind eye to these attacks, leading the families of the kidnapped girls to view with skepticism official statements describing an intense, ongoing search.

Hundreds of Nigerian women have begun daily protests in the capital city of Abuja, demanding the government make clear what’s being done to rescue the girls.

“Some parents I spoke to just couldn’t speak, they were so upset and so disappointed by the government,” Okeowo says. “They had tried themselves to go search for their girls, but it was too dangerous.”

A few of the teenagers who escaped soon after the kidnapping have reported they were forced to cook, clean, fetch water and firewood and do other tasks for the men, Okeowo says. Now, the missing students’ parents are hearing that they are being married off to the militants. Some reports specify that the girls, who are between 16 and 18 years old, are being sold for about $12 each.

She described a conversation with a girl who escaped and is now tormented that her cousins and close friends are still captive. “All she’s doing is fasting and praying and thinking of them.”