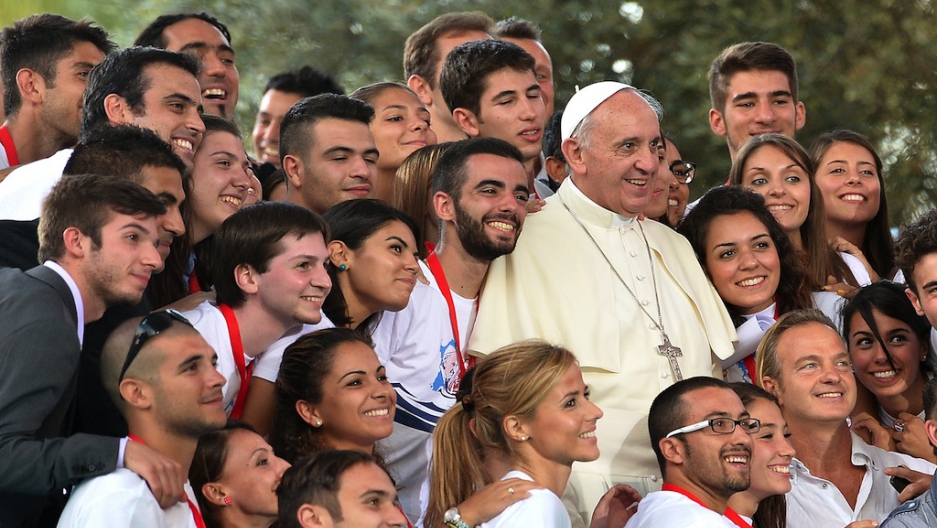 Pope Francis poses with participants at the end of a meeting with young people entitled "Throw your nets" in Largo Carlo Felice in Cagliari on September 22, 2013.
Credit: ALBERTO PIZZOLI
Share

ROME — Late Wednesday night, on the eve of May Day, an auditorium located outside Vatican City displayed a video recording of Pope Francis, with only standing room before it.

More than 1,000 Italians had come together for a prayer vigil as the recording showed the Pope denouncing “the idolatry of money” and “the tyranny of capitalism.” The vigil was held the night before International Workers Day in solidarity with those suffering from the country’s worsening labor crisis.

“Where there is no work, there is no dignity," Pope Francis said in a sermon from last year — one that still rings true for the hundreds of young people here, gazing upward at a man who in just one year has become the world’s most visible champion of economic equality in a way that his bejeweled predecessors never could have pulled off.

One explanation for the resonance of his message this evening is that over 42 percent of young people are unemployed, according to data released Wednesday by the national statistics agency. It’s the highest youth unemployment rate among G7 countries; a rate that economists say imperils the near future of Europe’s third-largest economy.

And this pontiff gets it.

In an interview with Italian media last year, Francis called youth unemployment “the most serious of the evils that afflict the world these days,” on equal footing only with “the loneliness of the old.”

In unequivocal terms, that means the present dearth of career opportunities for young people is worse than war, poverty and famine, according to Francis.

“The young need work and hope but have neither one nor the other, and the problem is they don't even look for them any more. They have been crushed by the present. You tell me: can you live crashed under the weight of the present? Without a memory of the past and without the desire to look ahead to the future by building something, a future, a family? Can you go on like this?” he added.

As a reporter for GlobalPost’s Generation TBD Special Report, I’ll spend the summer looking at how youth in Italy “go on like this,” and share the answers I find and stories I encounter.

For now, one response to the current unemployment crunch is movement. Many youth are fleeing, not unlike the Pope’s own father did as a young man from northern Italy nearly a century ago. His father was “full of illusions of making it” in Argentina, the Pope said, only to wind up in that country’s depression in the 1930s, once again without work.

Meanwhile, tens of thousands of non-Italian young people in search of work are moving in — flooding the country’s shores, which extend southward within close reach of North Africa.

But in Italy’s rigidly limited job market, they too are finding the prospect for a future in the country difficult.

“Francis understands this,” said Elisa Monibidin, who helped organize the prayer vigil with Azione Cattolica, the country’s oldest Catholic lay organization. At 31, Monibidin only recently found a temp job after a desperate search.

“Coming together like this is the most we can do,” she said. “People are desperate. Fortunately Pope Francis is appealing on our behalf.”

More from GlobalPost: Generation TBD: An America full of Detroits