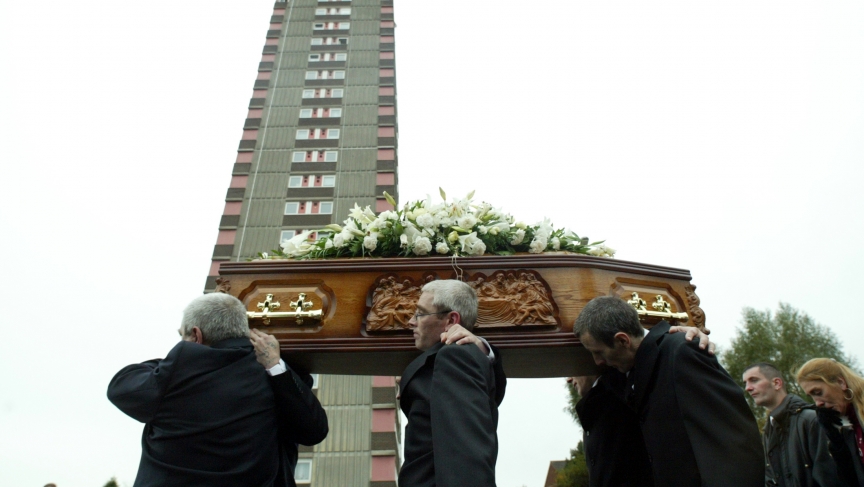 One of Northern Ireland's top politicians was in police custody Thursday.

Sinn Féin leader Gerry Adams was being questioned about his alleged role in the murder of Jean McConville. The mother of 10 was beaten, abducted and killed by the Irish Republican Army in 1972. The IRA believed McConville was an informant.

McConville's son, Michael, told the BBC about the night when his mother was taken from their home in West Belfast by an IRA gang.

"They barged their way in. Me and all my brothers and sisters were holding on to my mother, crying and squealing. My mother was in an awful state."

Jean McConville was a 38-year-old widow who the IRA branded as a British spy.

The IRA said it was after she ignored their warnings that they executed her and buried her body in a secret grave just over the border in the Irish Republic.

Michael McConville said he and his family knew two weeks after their mother was taken that she was dead, because an "IRA man had come and left my mother's purse and her wedding rings at the house."

An investigation by Northern Ireland's police ombudsman said there was no evidence that McConville was an informant.

The IRA did not admit killing her until 1999, and her remains — including a skull bearing a single gunshot wound to the back of the head — were found in 2003 near a Republic of Ireland beach.

The investigation into McConville's killing was revived by the release of a series of taped interviews given by former guerrillas from the Northern Ireland conflict as part of an oral history project at Boston College.

Boston College researchers interviewed Brendan Hughes, an IRA volunteer who fell out with Adams over the Sinn Féin leader's peace strategy, and Dolours Price, one of the highest-profile female members of the Provisional IRA.

Some of the interviews were released after Brendan Hughes died. The Northern Ireland police have taken legal steps to acquire the remaining Boston College interviews.

Kevin Cullen is a Boston Globe columnist and is the former UK and Ireland bureau chief for the paper.

"In those interviews, both Mr. Hughes and Ms. Price alleged that Gerry Adams was the IRA commander, who in 1972 gave the orders to abduct, interrogate, murder, and secretly bury Jean McConville."

Adams, 65, who has always denied membership of the IRA, said he was "innocent of any part" in the killing, which he said was "wrong and a grievous injustice to her and her family".

"Well publicized, malicious allegations have been made against me. I reject these," he said in a statement.

"The reality is that politically, culturally, socially, the people in Northern Ireland can’t agree on what to do about their dirty war," said Kevin Cullen. "And so it’s playing out in cases like this.”

Adams' arrest comes just three weeks before elections in both Northern Ireland and the Republic of Ireland.