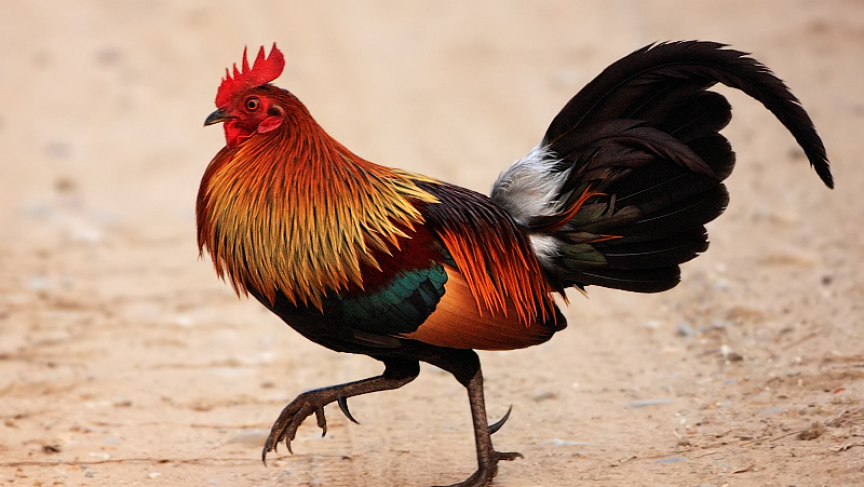 The Red Jungle Fowl is believed to be the progenitor of the modern-day chicken.

About 12,000 years ago, the first human “genetic engineers” started introducing small changes to plants and animals to produce benefit for humans.

Now scientists are working together to illuminate the story of how animal breeding and food cultivation got started. They are examining everything from genetics to archaeological records to linguistics to fill in the missing pieces.

Greger Larson, an evolutionary biologist at Durham University in the United Kingdom, says, “it is difficult to overstate the cultural and biological impacts that the domestication of plants and animals has had on our species.”

Larson recently published the results of a genetic study comparing modern-day chickens to their ancestors through time. Nowadays we take it for granted that chickens exist solely for our culinary enjoyment, but Larson says this wasn't true, until relatively recently.

“Early chickens were likely not selected for being on the plate,” Larson says. They were important in other ways, however. “There was a lot of ritual practice. There was probably a lot of [reliance on] eggs. They feature very frequently in religious practices and burials ... even chicken fighting, for that matter.”

In fact, Larson says, the way we currently view chickens, and other animals, is very different from how our ancestors did.

To us, Larson says, “a chicken is a chicken, and they’re just kind of there — you can’t really distinguish one individual from another. The way that our ancestors viewed their animals was much more individualized and much more to do with personality and ownership [by specific individuals] — in the way that we conceive of our pet dogs now.”

Once humans began to view chickens differently — as a creature useful for survival — they bred the chickens to maximize their size and their egg production. Today’s chickens can be 10 to 15 pounds larger than its wild ancestor and can produce eggs at nearly 10 times the rate.

Paul Gepts, a professor of plant science at the University of California, Davis, says those same impulses drove early humans’ domestication of plants, including the chili pepper.

Because their lives depended on food, Gepts says, early agricultural humans were keen observers of variation in their fields. So they selected for the essential features of a plant by separating certain seeds and cuttings, replanting them, and maintaining that feature in the fields year after year.

The early chili pepper, for example, was spicy, Gepts say, but it looked very different. It was a small, round sphere no bigger than a quarter of an inch. One of the effects of domestication has been to increase the size and changed the shape of the fruit.

“If you like it, you want to have a bigger fruit,” Gepts says. “This has happened all over the place. [I]f you look at other crops, like maize or beans, you see an increase in size whenever people like it.”

Today, the chili pepper is the world’s most widely-grown spice crop. In their study, Gepts and his collaborators used archeology, ecology, genetics and linguistics to identify the region in Mexico and the approximate era in history when the chili pepper was first domesticated.

Study co-author Gary P. Nabhan, an ethnobiologist and agroecologist at the University of Arizona's Southwest Center noted: "This is the first research ever to integrate multiple lines of evidence in attempts to pinpoint where, when, under what ecological conditions, and by whom a major global spice plant was domesticated."

Incorporating linguistics proved to be a key component of the study’s success. “[The linguists] took current languages, and then worked their way back to find words for pepper,” Gepts says. “In doing so, they found that a group of languages called Oto-Manguean was the first to have a special word for pepper. They were able to date the word to approximately 6500 years ago.”

Gepts point out that "identifying the origin of the chili pepper is not just an academic exercise. By tracing back the ancestry of any domesticated plant, we can better understand the genetic evolution of that species and the origin of agriculture — a major step in human evolution in different regions of the world," he says.

"This information, in turn, better equips us to develop sound genetic conservation programs and increases the efficiency of breeding programs, which will be critically important as we work to deal with climate change and provide food for a rapidly increasing global population," Gepts adds.